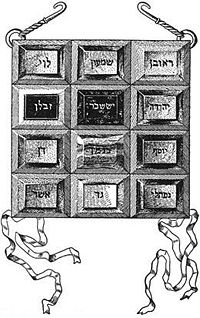 The breastplate of the High Priest.

The priestly breastplate (Hebrew hoshen חֹשֶׁן) was a sacred breastplate worn by the High Priest for the Israelites, according to the Book of Exodus. In the biblical account, the breastplate is sometimes termed the breastplate of judgement, because the Urim and Thummim, which were used in divination, were placed within it.[1][2]

According to the description in Exodus, this breastplate was attached to the ephod, by gold chains/cords tied to the gold rings on the ephod's shoulder straps, and by blue ribbon tied to the gold rings at the lower parts of the ephod (Exodus 28:15-19) the biblical description states that the breastplate was also to be made from the same material as the Ephod - embroidered linen - and was to be a square, a cubit in width, two layers thick, and with four rows of three engraved gems each embedded upon it, each jewel being framed in gold.[3] The description states that the square breastplate was to be formed from two equal rectangular pieces of cloth - suggesting that its appearance was similar to a backless waistcoat, with a pouch inside to contain the Urim and Thummim. The term for the breastplate, hoshen, appears to be connected either to its function or to its appearance; some scholars think that it is probably derived from Hebrew hasuna, meaning "beautiful," while others think that it is more likely to derive from Hebrew sinus, meaning "a fold for containing something."[4]

According to the Talmud, the wearing of the Hoshen atoned for the sin of errors in judgement on the part of the Children of Israel (B.Zevachim 88b). 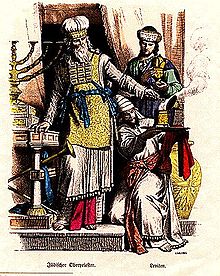 The twelve jewels in the breastplate were each, according to the Biblical description, to be made from specific minerals, none of them the same as another, and each of them representative of a specific tribe, whose name was to be inscribed on the stone. There is no consistent view in classical rabbinical literature as to the order of the names; the Jerusalem Targum, for example, argued that the names appeared in the order of the birth of each tribe's patriarch according to the Book of Genesis; Maimonides argued that the names were all engraved on the first stone, with the words [these are] the tribes of Jeshurun being engraved on the last stone; kabbalistic writers such Hezekiah ben Manoah and Bahya ben Asher argued that only six letters from each name was present on each stone, together with a few letters from the names of Abraham, Isaac, or Jacob, or from the phrase [these are] the tribes of Jeshurun, so that there were seventy-two letters in total (72 being a very significant number in Kabbalistic thought).[1]

Unfortunately, the meaning of the Hebrew names for the minerals, given by the masoretic text, are not clear,[1] and though the Greek names for them in the Septuagint are more clear, scholars believe that it cannot be completely relied on for this matter because the breastplate had ceased to be in use by the time the Septuagint was created, and several Greek names for various gems have changed meaning between the classical era and modern times.[5] However, although classical rabbinical literature argues that the names were inscribed using a magic worm because neither chisels nor paint nor ink were allowed to mark them out,[6] a more naturalistic approach suggests that the jewels must have had comparatively low hardness in order to be engraved upon, and therefore this gives an additional clue to the identity of the minerals.[7]

The jewel stones are as follows (the first item in each row is probably the right hand side, as Hebrew is a right to left script):

12 Jewels in the Christian New Testament

In the New Testament Book of Revelation is the description of a city wall, with each layer of stones in the wall being from a different material; in the original Koine Greek, the layers are given as iaspis, sapphiros, chalcedon, smaragdos, sardonyx, sardion, chrysolithos, beryllos, topazion, chrysoprason, yacinthos, amethystos.[24] This list appears to be based on the Septuagint's version of the list of jewels in the Breastplate - if the top half of the breastplate was rotated by 180 degrees, and the bottom half turned upside down, with Onchion additionally swapping places with Topazion, the lists become extremely similar; there are only four differences:

Whether there is any pattern to the choice of gemstones depends on their identity. Taking the majority view of scholars in regard to the identity of the gems, and including the implication from the Book of Revelation that the Onyx at the end of the fourth row was a Sardonyx, there are four colours - red, green, yellow, and blue - each represented by a clear gem (red - Carbuncle, green - Heliodor, yellow - Chrysolite, blue - Amethyst), an opaque gem (red - Carnelian/red Jasper, green - green Jasper, yellow - yellow Jasper/yellow Serpentine, blue - Lapis Lazuli), and a striped gem (red - Sardonyx, green - Malachite, yellow - pale golden Agate, blue - sky-blue Agate).[7] The four colours of red, green, yellow, and blue, are the first four colours (apart from black and white) distinguished by languages, and are distinguished in all cultures with at least six colour distinctions (the other two being black and white);[25] these colours roughly correspond to the sensitivities of the retinal ganglion cells (the retinal ganglia process colour by positioning it within a blue to yellow range, and separately positioning it within a red to green range).[26] The colour scheme generally corresponds with the colour scheme of the Amarna letters.[1][clarification needed]