Hand bill from the New York City Board of Health, 1832. The outdated public health advice demonstrates the lack of understanding of the disease and its actual causative factors.

It is estimated that cholera affects 3-5 million people worldwide, and causes 100,000-130,000 deaths a year as of 2010.[1] This occurs mainly in the developing world.[2] In the early 1980s, death rates are believed to have been greater than 3 million a year.[3] It is difficult to calculate exact numbers of cases, as many go unreported due to concerns that an outbreak may have a negative impact on the tourism of a country.[4] Cholera remains both epidemic and endemic in many areas of the world.[3]

Although much is known about the mechanisms behind the spread of cholera, this has not led to a full understanding of what makes cholera outbreaks happen some places and not others. Lack of treatment of human feces and lack of treatment of drinking water greatly facilitate its spread, but bodies of water can serve as a reservoir, and seafood shipped long distances can spread the disease. Cholera was not known in the Americas for most of the 20th century, but it reappeared towards the end of that century and seems likely to persist.[5]

Deaths in India between 1817 and 1860 are estimated to have exceeded 15 million people. Another 23 million died between 1865 and 1917. Russian deaths during a similar time period exceeded 2 million.[6]

[19] During this pandemic the beliefs behind the reason for cholera differed. In France cholera was assumed to somehow be connected to the poor community or the environment. Russia thought of this disease as contagious and America put the blame of cholera on recent immigrants, specifically the Irish. Lastly, some of the British thought that the reason might be due to divine intervention.:[19]

1854 - An outbreak of cholera in Chicago took the lives of 5.5% of the population (about 3,500 people).[9][21] In 1853-4, London's epidemic claimed 10,738 lives. The Soho outbreak in London ended after removal of the handle of the Broad Street pump by a committee instigated to action by John Snow.[22] His study proved contaminated water was the main agent spreading cholera, although he did not identify the contaminant. It would take many years for this message to be believed and acted upon. Throughout Spain, cholera caused more than 236,000 deaths in 1854–55.[23] In 1854 and 1855, it entered Venezuela; Brazil also suffered in 1855.[15]

During the third pandemic, Tunisia, who had not been affected by the two previous pandemics thought the reason for choler was the Europeans. They blamed the sanitation of the Europeans who had previously had the disease and were in their country. Also, the United States now assumed that cholera was somehow associated with African Americans :[24]

Outbreaks in North America in 1866 - 1873 killed some 50,000 Americans.[17]
In London, a localized epidemic in the East End claimed 5,596 lives, just as London was completing its major sewage and water treatment systems; the East End section was not quite complete. William Farr, using the work of John Snow, et al., as to contaminated drinking water being the likely source of the disease, relatively quickly identified the East London Water Company as the source of the contaminated water. Quick action prevented further deaths.[9] Also, a minor outbreak occurred at Ystalyfera in South Wales, caused by the local water works using contaminated canal water; it was mainly its workers and their families who suffered, and 119 died. In the same year, more than 21,000 people died in Amsterdam, The Netherlands. In the 1870s, cholera spread in the U.S. as an epidemic from New Orleans along the Mississippi River and related ports of tributaries, with thousands dying.

In this time period cholera greatly started to be associated with outsiders and this could be seen time and time again. The Italians blamed the Jews and gypsies, the British who were in India accused the “dirty natives”, and the Americans saw the problem coming from the Philippines.[36] 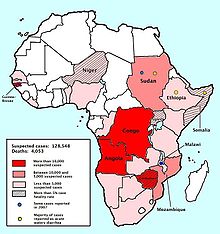 A persistent myth states 90,000 people died in Chicago of cholera and typhoid fever in 1885, but this story has no factual basis.[61] In 1885, there was a torrential rainstorm that flushed the Chicago River and its attendant pollutants into Lake Michigan far enough that the city's water supply was contaminated. However, because cholera was not present in the city, there were no cholera-related deaths. Nevertheless, the incident caused the city to become more serious about its sewage treatment.