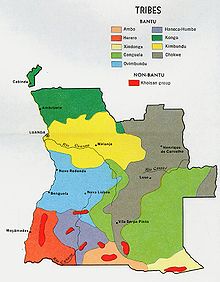 The Chokwe also pronounced Tchokwe are an ethnic group of Central Africa whose ancestry can perhaps be traced to Mbundu and Mbuti Pygmies. Large groups of Chokwe currently reside in Angola, Zambia, and the Democratic Republic of Congo. Their language is usually referred to as Chokwe, a Bantu language. Many also speak the official languages of their countries: English in Zambia, French in Democratic Republic of Congo, and Portuguese (as first or second language) in Angola.

The Chokwe were once one of the twelve clans of the great Lunda Empire of 17th- and 18th-century Angola. They eventually became independent when they refused to continue paying tribute to the Lunda emperor. Their successful trading and abundant resources caused them to be one of the wealthiest groups in Angola. By 1900 the Chokwe had dismantled the Lunda kingdom altogether, using guns they had received in trade from the Ovimbundu. Chokwe language and influence then began to dominate northeastern Angola and spread among the Lunda peoples.