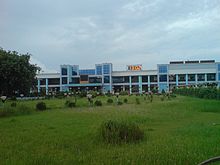 Kolkata Station (also known as Chitpur station) (In Bengali: চিতপূর ) is the newest of the four intercity train stations serving Howrah and Kolkata, India; the others are Sealdah Station, in Kolkata, Shalimar Station in Howrah and Howrah Station in Howrah. Kolkata station is situated in the Chitpur locality of north central Kolkata.

In 2000, the first plans were made to utilise this area as a railway station, since the rapid growth of long distance passengers was overcrowding the Sealdah station. Due to limitations of space, new platform construction is restricted at Sealdah. Two new platforms (9A & 9B) constructed between 2004 and 2005 proved insufficient. Due to its central position in Kolkata, the Sealdah station is too busy for suburban train traffic. To overcome this problem, Eastern Railways suggested constructing another large railway station in Kolkata, to cater mostly to long distance trains.The decision to build a terminal at Chitpur came after a lot of deliberation and a process of elimination. Different locations were suggested for the station site. Three years ago, Majerhat was suggested as a possible location. The idea was shelved owing to technical difficulties involving the construction of a bridge over the Hooghly river from Bauria to Budge Budge. Then there was Shalimar, in Howrah district, which was already a goods terminal operating under the South Eastern Railway. In fact, a passenger service on a trial basis was also started from there through two pairs of trains. But the project could not take off owing to certain problems relating to infrastructure and the considerable distance of the terminal from Kolkata proper.Chitpur was decided upon finally and approved by the Railway Ministry in 2003-04. Certain inherent advantages helped in the selection of this place. Other than being located in the heart of Kolkata, Chitpur has already functioned as an important rail yard for around a century. Moreover, unlike in the case of Majerhat and Shalimar, the huge property in and around the place belongs to the Railways. The proposal has been accepted by the Kolkata Metropolitan Development Authority (KMDA), and on May 15, 2003, West Bengal Chief Minister Buddhadeb Bhattacharjee laid the foundation stone for the project.

Construction started in 2004. The tracks from the coal-yard were closed first, and then a large portion of electrified goods tracks were shut down. Those tracks, masts and wires were demolished. Next, the Dumdum - Majherhat link rail line's (Kolkata Circular Railway) track was temporarily re-aligned. This action permitted the construction of platforms, station buildings and a parking area to begin. After construction was completed, the circular rail tracks were aligned as before, now via the new station. Other tracks were re-aligned, and completely electrified for passenger coaches shunting (up to side of Tala station). Tracks in the opposite direction, which were not electrified and underutilized, were re-laid, re-aligned and fully electrified for goods trains (with wagon to lorry transfer facility). Part of the former electrified goods lines, which were closed, now entered use as a coach siding.

After these, the official inauguration occurred in January 2006.

The station is served by the Eastern Railway for trains to Bandel, Kalyani Simanta, Gede, Shantipur, Krishnanagar, Dankuni, Kolkata Airport, Bongaon, Hasnabad and others. The number of suburban trains is lower than long-distance trains. This station runs many long distance express trains including two pairs of Garibrath Express, and one long distance passenger train - Lalgola Passenger. There are five platforms, among them Platform 1 & 2 is used by only suburban trains, and Platform 3,4 & 5 are used by long-distance trains. . The station is operated by the Eastern Railway. The only international train of eastern India is Kolkata - Dhaka Maitree Express, which runs towards Bangladesh, is also departed from here.

The Maharaja Express departed from this station for the first time at 20 March 2010.

There are waiting rooms and retiring rooms for use by passengers awaiting connecting trains. In addition there is a taxi stand and a bus stand outside the station. Chipur station has following features 1. 3DD lines with platform. 2. Balance station building and circulating area. 3. Parcel complex, RRI building. 4. Over head tank, water and effluent treatment plant 5. Coaching and ROH depot. 6. 3 Washing Pit lines

As a newer rail station, this station is not well served by public transport. Only two or three of the West Bengal Surface Transport Corporation's bus routes serve the station directly. Other buses and trams run through Radha Gobinda Kar Road, which is 1 km away from the station. The nearest metro station is 2 km away.