Quercus muehlenbergii, the chinkapin oak (or chinquapin oak), is an oak in the white oak group (Quercus sect. Quercus). The scientific name is often incorrectly spelled Q. muhlenbergii, and the species was often called Quercus acuminata in older literature. Quercus muehlenbergii is native to eastern and central North America, ranging from Vermont west to Wisconsin and south to South Carolina, western Florida, New Mexico, and northeastern Mexico from Coahuila south to Hidalgo. 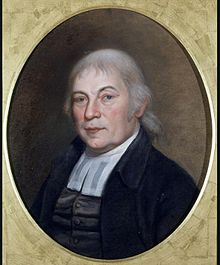 Since its recognition as a different species from the similar-appearing chestnut oak (Quercus prinus), Q. muehlenbergii has generally been regarded as a distinct species; no subspecies or varieties are currently recognized within it, although a few infraspecific variants had been accepted in the past.

The tree's scientific name honors Gotthilf Heinrich Ernst Muhlenberg (1753–1815), a Lutheran pastor and amateur botanist in Pennsylvania. In publishing the name Quercus mühlenbergii, German-American botanist George Engelmann mistakenly used an umlaut in spelling Muhlenberg's name, even though Pennsylvania-born Muhlenberg himself did not use an umlaut in his name. Under the modern rules of botanical nomenclature, umlauts are transliterated, with "ü" becoming "ue", hence Engelmann's Quercus mühlenbergii is now presented as Quercus muehlenbergii. In lack of evidence that Engelmann's use of the umlaut was an unintended error, and hence correctable, the muehlenbergii spelling is considered correct, although the more appropriate orthographic variant Quercus muhlenbergii is often seen.[1]

Chinkapin oak is monoecious in flowering habit; flowers emerge in April to late May or early June. The staminate flowers are borne in catkins that develop from the leaf axils of the previous year, and the pistillate flowers develop from the axils of the current year's leaves. The fruit, an acorn or nut, is borne singly or in pairs, matures in 1 year, and ripens in September or October. About half of the acorn is enclosed in a thin cup and is chestnut brown to nearly black.

Chinkapin oak is also sometimes confused with the related chestnut oak (Quercus montana), which it closely resembles. However, unlike the pointed teeth on the leaves of the chinkapin oak, chestnut oak leaves generally have rounded teeth. The two species have contrasting kinds of bark: Chinkapin oak has a gray, flaky bark very similar to that of white oak (Q. alba) but with a more yellow-brown cast to it (hence the occasional name yellow oak for this species), while chestnut oak has dark, solid, deeply ridged bark. The chinkapin oak also has smaller acorns than the chestnut oak or another similar species, the swamp chestnut oak (Q. michauxii), which have some of the largest acorns of any oaks.

Chinkapin oak is generally found on well-drained upland soils derived from limestone or where limestone outcrops occur. Occasionally it is found on well-drained limestone soils along streams. The Chinkapin oak is generally found on soils that are weakly acid (pH about 6.5) to alkaline (above pH 7.0). It grows on both northerly and southerly aspects but is more common on the warmer southerly aspects. It is absent or rare at high elevations in the Appalachians.

It is rarely a predominant tree, but it grows in association with many other species. It is a component of the forest cover type White Oak-Black Oak-Northern Red Oak (Society of American Foresters Type 52) and the Post Oak-Blackjack Oak (Type 40) (2).

Chinkapin oak is classed as intolerant of shade. It withstands moderate shading when young but becomes more intolerant of shade with age. It is regarded as a climax species on dry, drought prone soils, especially those of limestone origin. On more moist sites it is subclimax to climax. It is often found as a component of the climax vegetation in stands on mesic sites with limestone soils. However, many oak-hickory stands on moist sites that contain chinkapin oak are succeeded by a climax forest including beech, maple, and ash.

Severe wildfire kills chinkapin oak saplings and small pole-size trees, but these often resprout. However, fire scars serve as entry points for decay-causing fungi, and the resulting decay can cause serious losses.

Like that of other white oak species, the wood of the chinkapin oak (Quercus muehlenbergii) is a durable hardwood prized for many types of construction.[citation needed]

The chinkapin oak is especially known for its sweet and palatable acorns. Indeed, the nuts contained inside of the thin shell are among the sweetest of any oak, with an excellent taste even when eaten raw, providing an excellent source of food for both wildlife and people. The acorns are eaten by squirrels, mice, voles, chipmunks, deer, turkey, and other birds.[4][5]