This article is about the massacre of ethnic Chinese in the colonial city of Batavia. For an earlier massacre on a ship of the same name, see Batavia (ship).

Because of unrest in the Chinese population, Governor General Adriaan Valckenier declared that any uprising was to be dealt with using deadly force. This resolution was called into force on 7 October after a group of hundreds of ethnic Chinese killed 50 Dutch soldiers, in response to which the Dutch sent over 1,800 troops and supporting units; this led to the Chinese populace being stripped of all weapons and put under curfew. After an assault by ethnic Chinese on the walls of Batavia, Valckenier called another meeting of the Council on 9 October; the same day, other Batavian ethnic groups began burning Chinese houses along Kali Besar after being frightened by rumours of Chinese atrocities. This encouraged the Dutch soldiers, who later that day launched an assault on ethnic Chinese homes using cannons. From there the violence spread throughout Batavia, with Chinese men, women, and children being killed. For the following two weeks fugitive Chinese were hunted and killed by gangs of "bandits", until Governor General Valckenier called for a cease of hostilities on 22 October.

The massacre is generally agreed to have killed 10,000 ethnic Chinese, with only a total of 3,000 surviving. It was followed by a period of numerous attacks on ethnic Chinese throughout Java, which led to a two-year war between a joint army of ethnic Chinese and Javanese against Dutch troops. Governor General Valckenier was recalled to the Netherlands and charged with crimes related to the massacre, with Gustaaf Willem van Imhoff replacing him as governor general. 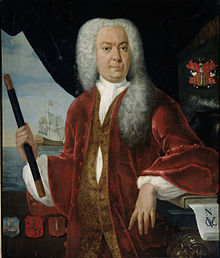 During the early years of the Dutch colonization of Indonesia, many people of Chinese descent were contracted as skilled artisans in the construction of Batavia, on the northwestern coast of Java.[1] Along with the economic boom caused by trade between the East Indies via Batavia and China, the number of ethnic Chinese in Batavia grew rapidly, reaching a total of 10,000 by 1740; at least another 15,000 lived outside the city walls,[2] with numbers reportedly as high as 80,000.[3]

After an outbreak of malaria killed thousands during the 1730s, including Governor of Batavia Dirck van Cloon, conflict arose among the Dutch. Increasingly suspicious of the growing number of ethnic Chinese and their economic prowess, on 25 July 1740 the government released a resolution stating that Chinese considered "suspicious" should be deported to Zeylan in order to provide manpower for cinnamon harvesting there. Wealthy Chinese were also extorted, threatened with deportation by Dutch officials.[4][5]

This caused unrest among the ethnic Chinese, as well as rumours that deportees were not taken to their destinations at all, but were instead thrown overboard once they were out of sight of Java. As a result, many Chinese workers fled from their jobs.[3][4] Although at first some members believed that the Chinese would never attack Batavia,[4] on 26 September Governor General Adriaan Valckenier called an emergency meeting of the Council of the Indies, where he gave orders to respond to any ethnic Chinese uprisings with deadly force.[5] This was contested by former governor of Zeylan Gustaaf Willem van Imhoff, who had recently returned to Batavia.[6]

Chinese houses were burned during the massacre

On 7 October, a group of hundreds of ethnic Chinese killed 50 Dutch soldiers in Meester Cornelis (now Jatinegara) and Tanah Abang; in response, the Dutch sent 1,800 troops, as well as schutterij (militia) and eleven battalions of conscripts to stop the revolt. They established a curfew and canceled plans for a Chinese festival;[5] the Chinese were not allowed to light candles either, for fear that they would conspire against the Dutch in the candlelight. They were also disarmed, forced to surrender everything "down to the smallest kitchen knife".[7] The following day, the Dutch repelled a Chinese attack at the city's outer walls, leading to Governor General Valckenier calling another meeting of the council on 9 October.[8]

Meanwhile, rumours spread among the other ethnic groups in Batavia that the Chinese were plotting to kill, rape, or enslave them. As a preemptive strike, they burned houses belonging to ethnic Chinese along Kali Besar; this was followed by a Dutch assault on Chinese settlements elsewhere in Jakarta, in which they burned houses and killed men, women and children. Dutch politician and colonial system critic Wolter Robert wrote in 1840 that "pregnant and nursing women were killed ... hundreds of prisoners were slaughtered like sheep ... [and] rich Chinese, running to their European friends' houses for protection ... were promptly surrendered to the bloodthirsty hunters".[A][9]

At around 5:00 p.m. local time (UTC+7), the Dutch opened fire on Chinese-occupied houses with cannons, causing the houses to catch fire. Some Chinese were trapped in the burning houses, while others were shot upon leaving their homes and still others committed suicide in desperation. Those who reached the canal located near the housing district were killed by Dutch troops waiting in small boats. The actions later spread throughout the city.[10]

The following day the violence continued to spread, with Chinese patients in a hospital being taken outside and killed. During the next two weeks ethnic Chinese who had survived the initial assault were hunted by gangs of "bandits", who killed those they found. On 22 October 1740, Governor General Valckenier called for all killings to cease.[11] 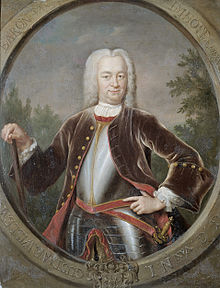 Van Imhoff was recalled to the Netherlands, later being reassigned as Governor General of the Dutch East Indies

Most accounts of the massacre estimate that 10,000 people were killed within Batavia's city walls, while another 500 were seriously wounded. At least 700 houses were raided and burned.[12] A.R.T. Kemasang estimates that 3,000 Chinese survived the massacre.[13] Indonesian historian Benny G. Setiono notes that 500 of those killed were prisoners and hospital patients[12], with a total of 3,431 survivors.[14] This was later followed by an "open season" against the ethnic Chinese throughout Java, causing another massacre in 1741 in Semarang, and more later in Surabaya and Gresik.[15]

As part of conditions for the cessation of violence, all of Batavia's ethnic Chinese were moved to a pecinan, or Chinatown, outside of the city walls, now known as Glodok. This allowed the Dutch to more easily monitor the Chinese.[16] In order to leave the pecinan, ethnic Chinese required special passes granting permission.[17] However, by 1743 ethnic Chinese had already returned to inner Batavia, with several hundred merchants operating there.[3] Other ethnic Chinese fled to Central Java, where they attacked Dutch trading posts, later joined by troops under the command of Pakubuwono II. This uprising was quashed in 1743.[18]

After a vote of no confidence by the Council of the East Indies on 16 December 1740, Governor General Valckenier resigned, leaving the East Indies in 1744 and later being investigated for his involvement in the massacre; Valckenier died before the investigation was completed. Van Imhoff was called back to the Netherlands to face charges of insubordination; these charges were later dismissed, and van Imhoff was sent back to Batavia to be the new Governor General of the East Indies, beginning his service in 1743.[19]

The massacre led to the names of numerous areas in Jakarta. One possible etymology for Tanah Abang, meaning "red earth", is that it was named for the Chinese blood which was spilled there. Rawa Bangke, a subdistrict of East Jakarta, may be derived from the vulgar Indonesian word for corpse, bangkai, due to the amount of ethnic Chinese who were killed there; a similar etymology has been suggested for Angke in Tambora.[20]