Agriculturalism, also known as the School of Agrarianism, the School of Agronomists, the School of Tillers, and in Chinese as the Nongjia (農家/农家), was an early agrarian Chinese philosophy that advocated peasant utopian communalism and egalitarianism.[1] The Agriculturalists believed that Chinese society should be modeled around that of the early sage king Shen Nong, a folk hero which was portrayed in Chinese literature as "working in the fields, along with everyone else, and consulting with everyone else when any decision had to be reached."[1] They encouraged farming and agriculture and taught farming and cultivation techniques, as they believed that agricultural development was the key to a stable and prosperous society. Agriculturalism has significantly influenced Chinese thought, and has been viewed as an essence of the Chinese identity.[2] 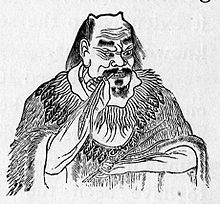 Agriculturalism dates back to the Spring and Autumn and Warring States era, during a period known as the "Hundred Schools of Thought". Throughout this period, competing states, seeking to war with one another and unite China as a single country, patronized philosophers, scholars, and teachers. The competition by scholars for the attention of rulers led to the development of different schools of thought, and the emphasis on recording teachings into books encouraged their spread.[3] The result was an era characterized by significant intellectual and cultural developments.[3] The major philosophies of China, Confucianism, Mohism, Legalism, and Taoism, all originated from this period.

The rise of the Qin Dynasty saw the purge of the Hundred Schools of Thought, including Agriculturalism. The Legalist Qin dynasty was intolerant of other schools of thought, seeking to burn any text that did not adhere to the Legalist philosophy.[5] Because of this, few Agriculturalist texts exist, and most of what is known of Agriculturalism comes from critical assessments by other philosophical schools.[4] However, concepts originally associated with Agriculturalism have had an impact on Confucianism, Legalism, and Chinese philosophy as a whole.[4]

Agriculturalism is primarily a social, economic, and political philosophy. The philosophy is founded on the notion that human society originates with the development of agriculture, and societies are based upon "people's natural prospensity to farm."[4] The Agriculturalists described the ancient political system, seen as ideal, as one where "the means by which the early sage kings led their people was to put agriculture before all other affairs.. the reason why Hou Ji undertook agriculture was because he considered it to be the root of instructing the masses."[4]

The ruler of Teng is an upright and worthy ruler. However, he has yet to hear the Way. A wise ruler tills the land together with his people to make his living. He governs while cooking his own meals. Now, that Teng has granaries and treasuries means that [the ruler] inflicts hardship on the people to fatten himself. How can he be a worthy ruler?
—Xu Xing[6]

Unlike the Confucians, the Agriculturalists did not believe in the division of labour, arguing instead that the economic policies of a country need to be based upon an egalitarian self sufficiency.[6] The Agriculturalists supported the fixing of prices, in which all similar goods, regardless of differences in quality and demand, are set at exactly the same, unchanging price. They suggested that people should be paid the same amount for the same services, a policy criticized by the Confucians as encouraging products of low quality, which "destroys the earnest standards of craftmanship."[6]

Agriculturalism was criticized extensively by rival philosophical schools, including the Mohist Mo Zi, the Confucian Mencius, and Yang Zhu.[4] Mencius criticized its chief proponent Xu Xing for advocating that rulers should work in the fields with their subjects, arguing that the Agriculturalist egalitarianism ignored the division of labour central to society. He points out that other early Chinese rulers did not work in fields, yet were equally as successful and revered as Shennong.[6] Mencius dismisses Xu Xing as a "Southern barbarian with a twittering tongue."[6]