The Chinese Taipei baseball team (Chinese: 中華臺北棒球代表隊; pinyin: Zhōnghuá Táiběi Bàngqiú Dàibiǎoduì), is the national team of the Republic of China (commonly known as "Taiwan"). It is governed by the Chinese Taipei Baseball Association. They are generally recognized as one of the elite national baseball teams. They are currently the fifth ranked baseball team in the world,[1] just behind South Korea. They have consistently maintained a top position in Asia, with occasional drops, such as after the 2008 Beijing Olympics, and rises in ranking, as after the 2009 Asian Baseball Championship. It has been ranked the second best national baseball team in Asia since the 1970s.[citation needed]

The team is often considered as one of the top three baseball teams in Asia, along with Japan and South Korea. The team comprises amateurs and professionals from Taiwan's Chinese Professional Baseball League, Japan's Central League and Pacific League, and North American major (MLB) and minor leagues. Chinese Taipei is currently ranked 5th in world baseball rankings, and is right behind Japan.

The team has participated in many of the international and regional tournaments and has achieved many successes. It has won six titles in Asian Baseball Championship, a bronze medal at the 1984 Olympic Games in Los Angeles, and a silver medal at the 1992 Olympic Games in Barcelona. Its recent success was the winning of the gold medal at the 2006 Asian Games in Doha in a sweeping victory by beating South Korea, Thailand, China, Philippines, and finally all-time rival Japan.

In 1954, when the team first participated in the Asian Baseball Championship, it competed under the name of United Team of Taiwan.[citation needed] Since the expulsion of the Republic of China from the United Nations in 1971, the National Baseball Team of the Republic of China was forced to compete internationally under the name of Chinese Taipei because of the People's Republic of China's diplomatic pressure through the One China Policy. In Taiwan it is both referred to as 中華隊 (hanyu pinyin: Zhōnghuá Duì; literally, Chinese (cultural) team) or 台灣隊 (hanyu pinyin: Táiwān Duì; literally, Taiwanese team).

Chinese Taipei has a very successful history in participating the Championship. It has finished 4 times in the first place, 7 times in the second place and 10 times in the third place. The team competed again in the 2007 Asian Baseball Championship which was held in Taiwan.

In the 2009 Championship, Chinese Taipei sought their revenge against their humiliating defeat by China at the 2008 Beijing Olympics with an obliterating win of 13-1, crushing the Mainland Chinese baseball team. They proceeded on to the finals against their old time rival Japan. Japan won the match and took the title with a narrow score of 6-5, putting Chinese Taipei in second place.

Chinese Taipei has not missed any of the Asian Games since its first appearance in 1990 in Beijing, PRC China. In Beijing, it finished in first place, however, it was a demonstration sport thus it did not receive any medals. Its second appearance was in 1994 where it finished in third place. In 1998, it again finished in third place. Chinese Taipei lost to South Korea in 2002 in Pusan, South Korea and hence finished in second. It was by far its best result. At the 2006 Asian Games in Doha, Qatar, a game-winning walk of hit by Lin Chih-sheng helped to win its first Asian Games baseball gold. The team received seventy million New Taiwan Dollar from the Republic of China (ROC)/Taiwan government for their excellent achievement in Doha. 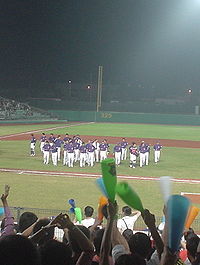 On 26 July 1992 and the following ten days, Chinese Taipei competed against seven other national teams from Cuba, the Dominican Republic, Italy, Japan, Puerto Rico, Spain and the United States at the 1992 Summer Olympics in Barcelona. The teams played each other seven rounds and the top four on the table advance to finals. Chinese Taipei eventually advanced to the finals, beating Japan 5-2 in the semi-finals. It struggled in the final against Cuba, suffering an enormous defeat. The score was 1-11. Nonetheless, it won a silver medal which is still now its best result ever achieved in the Olympics.

31 July 1992 - Round 5, Chinese Taipei beat the Dominican Republic eleven to nothing.

1 August 1992 - Round 6, Chinese Taipei faced one of its two main rivals from Asia - Japan. It acquired its fifth victory by beating Japan 2-0

4 August 1992 - Semi-final, Chinese Taipei defeated Japan 5-2 and would played against Cuba in the final.

Chinese Taipei qualified for the 2004 Olympics by finishing 2nd in the Asian Baseball Championship. The team ended up finishing 5th in the tournament.

Chinese Taipei participated in the 2006 World Baseball Classic. The squad included players from Major League Baseball. During the Classic, the team played in Pool A but ended up being the third place and did not advance. Their only victory was a 12-3 win over China. In the 2009 WBC, the team played in Pool A against the same teams as in 2006. After losses to South Korea and China, Chinese Taipei was eliminated from the tournament, finishing in 14th place.

The team qualified for the 2008 Olympics by finishing 3rd place in the Final Qualifying Tournament.

On August 15, Chinese Taipei lost to China for the first time in an international baseball event. However, it had been suspected by DPP legislators that Beijing set up the schedule unfair to Chinese Taipei. Chinese Taipei was scheduled to play the latest game the day before. It was estimated that the players could only get three hours of sleep.[4] This allegation has been rebuked by the governing party KMT as playing politics over baseball games as well as by the International Olympic Committee as common scheduling practice. The IOC further gave examples of other games being scheduled in a similar matter

The team finished 5th in the tournament.

In the final round of the tournament, Chinese Taipei defeated 2008 Olympic baseball champions South Korea with a 5-4 victory. Their next match was played against China, whom they lost to for the first time in history at the 2008 Summer Olympics in Beijing. Chinese Taipei would end up with a 13-1 victory in 7 innings (game ended due to mercy rule) over China. The team would then play a final decisive game against their long-time rival Japan. The Japanese team won 6-5 and took the championship title, having gone 3-0 in the final round. Chinese Taipei would finish as the runner-up, with 2 wins and 1 loss in the last round of the tournament.

Chinese Taipei participated in the 2009 Baseball World Cup, which occurred between September 9 and September 27, 2009. The team went 1-2 in the first round, losing to Mexico and Australia, but winning against Czech Republic. Chinese Taipei would enter the second round as a wild card. Chinese Taipei went 5-2 in the second round, pulling off victories against Italy, Japan, Netherlands, Australia, and Mexico. The team qualified easily for the final round, but finished in 8th place, going 1-6 and losing the match for a 7th place title.