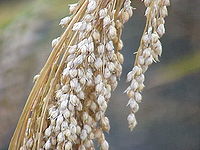 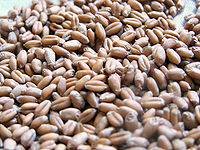 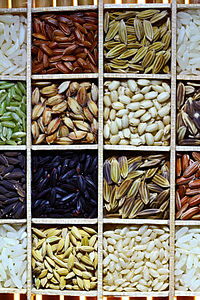 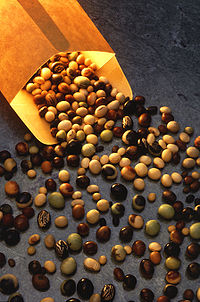 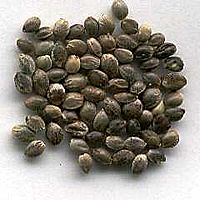 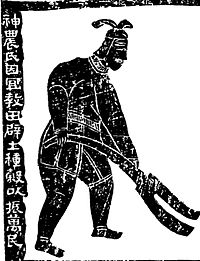 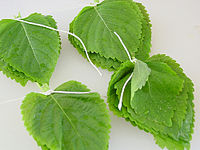 Perilla known as Shiso in Japanese

Chinese noodles have been made from most of the Wǔgǔ 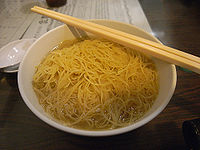 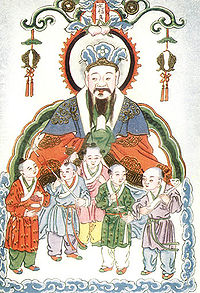 Zao Jun‎ the Kitchen God to whom Wǔgǔ offerings are made in some traditions. 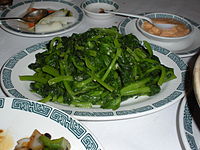 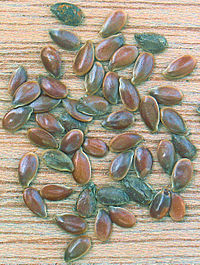 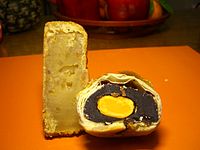 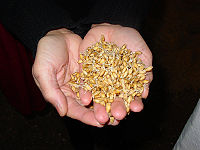 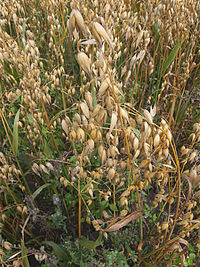 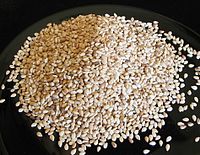 The Chinese Five Cereals (Chinese: 五穀; pinyin: Wǔgǔ) are a group of 5 farmed crops, mainly cereals or grains (except soybeans, which are legumes), which were all important in ancient China and regarded as sacred, or their cultivation was regarded as a sacred boon from a mythological or supernatural source.[clarification needed What are the other four?]

The name is sometimes translated as "Five Grains," "Five Sacred Grains," or "Five Crops" as the word "gǔ," derived from "valley" in this ancient set phrase is less specific than narrower translations than "crop," and the phrase benefits from a very obvious homophonic relationship of "gǔ," "crop" with "gǔ," "ancient" including "palaeo-" in Chinese language, so although not traditional in literary circles, the phrase might best be translated as "Five (Mainly Millable) Seeds" for greater biological accuracy, including medicinal applications of the optional group member hemp.

The sense of sacrality regarding Wǔgǔ proceeds from their being traditionally sourced from saintly rulers creating China's foundational culture wholesale. What is being claimed is not merely these culture givers preferring Wǔgǔ among many crops, but that it is because of the Wǔgǔ that agrarian society became possible, marking a profound, legendarily sudden shift from hunter-gatherer and nomadic patterns of life, which surrounding tribes continued to practice, thus making the central and lower Yellow River plains a distinctively settled heartland, a center or middle for those tribes which would come to consider themselves the central Middle Kingdom, or China.

There are at least 3 traditions, often appearing in the same ancient Chinese texts such as the Shiji regarding which mythological early Emperor of China introduced the Wǔgǔ:

The earlier emperor is Shennong, "Divine Farmer" (simplified Chinese: 神农; traditional Chinese: 神農; pinyin: Shénnóng; literally "Spirit Farmer"), often depicted in the historical landmark act of ploughing, to cultivate these crops, and who is also known as "Emperor of Five Grains" (simplified Chinese: 五谷先帝; traditional Chinese: 五穀先帝; pinyin: Wǔgǔ xiāndì)[1], and by ancient historical tradition is sited as ruling 2737–2699 BC in preliterate times as noted in List of Chinese monarchs where he is listed as Yandi, Flame Emperor, personal name Shennong though Shennong is clearly a title and ancient texts such as Shiji cite both different personal names for him, and in Shiji's case purport a dynastic series of Yandi, whether or not one family, and attempts to place Shennong in sequence in this series.

The later emperor is the Yellow Emperor (Chinese: 黃帝; pinyin: Huángdì; literally "Yellow Emperor"), cited as ruling 2699–2588 BC in preliterate times, who is Shennong's successor and/or succeeding senior emperor with Shennong as junior emperor (like senior Augustus and junior Caesar when both existed as co-ruling Roman Emperors), when their tribes merged after the Battle of Banquan as the combined Yanhuang tribe, which is referred to by the concatenation of the names of the 2 tribes' leaders. The Yellow Emperor is also credited in ancient texts with first teaching their cultivation to his/their Chinese subjects.[2]

Houji, Lord of Millet (Chinese: 后稷; pinyin: Hòu​jì; literally "Lord (or Empress) Millet") also variant (Chinese: 後稷; pinyin: Hòu​jì), is credited either with original or exemplary cultivation of millet and wheat[3], or with the original provision of millet to humanity, obtained from heaven. Either a son of Di Ku, thus a Great-great grandson of the Yellow Emperor[4] or born from virgin birth after his mother stepped in a divine footprint[5], he was elevated to Prince of Millet by King Chen Tang of Shang, founder of the Shang dynasty[3], and claimed as founding ancestor of the royal house of the Zhou dynasty[6] which succeeded the Shang dynasty. Houji was worshipped as one of the patron gods of abundant harvests[7], like Lai Cho[8].

Dadiwan culture ca. 5800-5400 BCE, along the upper Yellow River ate millet; Nanzhuangtou culture ca. 8500-7700 BCE on the middle Yellow River around Hebei Province had grinding tools. Later Yangshao culture, ca. 5000-3000 BCE on the Yellow River grew millet extensively and sometimes barley and rice and vegetables, wove hemp and silk which depends on a supply of mulberry leaves and other silkworm fodder, but may have been limited to slash and burn methods.

Succeeding cultures on the Yellow River and elsewhere, which are indeed archaeologically dated with some rough connection to the legendary traditional dating of mythological agriculture-founding Three Sovereigns and Five Emperors reigns, which were early explicated by ancient Chinese historians as possible whole dynasties of reigns rather than single individuals, would increasingly suggest wider-scale and more intensive farming methods which facilitated the development of the rest of Chinese civilization by making ordinary daily provisioning a lesser concern, at least for some. By Longshan culture ca. 3000-2000 BCE along the Yellow River, sericulture, farming of domesticated silkworms for silk production is found, and definite cities appear, which depend on more advanced farm supply.

Mythological and Historical Lists of Wǔgǔ Seeds and Crops

There are various versions of which five crops or even broad categories of crops are meant by this list.

The Chinese Five Cereals may be first listed in Fah Shên-chih's text on farming circa 2800 BCE entitled Fah Shên-chih Shu, "Fah Shên-chih's Book" (which must be a mythological text as such a date predates coherent Chinese history texts as well Shang Dynasty oracle bone inscriptions. (citation of historical Chinese text(s) referring to such a source needed.)[citation needed]

The Classic of Rites compiled by Confucius (traditionally September 28, 551 BCE – 479 BCE) from older sources lists soybeans, wheat, proso millet, foxtail millet and hemp. Another version replaces hemp with rice (citation of original Chinese text name needed[citation needed]), whose cultivation is a preoccupation of texts throughout Chinese historical culture, and the first cultivation of rice is of continuing sociopolitical as well as anthropological interest in Chinese archaeology and that of other Asian regions.[9][10]

Some assortment of 5 grains or small dry bulk crops such as beans continue to be used in Chinese ritual contexts, as in the Southern Chinese "Min Nan (Hokkien) Traditional Custom (Taboo) (閩南民间禁忌)" of creating a folk Daoist stove to cook “Chui Zhao Fan (hkk: Cui Zao Pheng),” a meal for the Kitchen God in which such an assortment of 5 dry seeds are placed into a slot in the chimney of the stove.[13] In this context, casual worship practices may simply use beans of 5 different colors instead of 5 different types of cereals or crops.

Culinarily, for voluntary human consumption rather than offerings to spirits, Chinese cuisine is not known for any single recipe using all 5 categories or any subset of analogously differentiated species, so there is no notable dish in the way there are a generally agreed Five-spice powder mix of Chinese seasonings or the varying ingredients used in the single dish ba bao fan (八寶飯) or "eight treasure rice" noted under Glutinous rice.

Used individually or in combinations of just a few ingredients at a time, however, the possibly hundreds of "Wǔgǔ" crop species and their various parts such as leaves, stalks, seeds, flowers, and roots, especially if all the beans and grains are included categorically, underpin much of Chinese cuisine and indeed most cuisines globally, since they include a large portion of starchy foundation foods and ingredients.

Chinese culinary expressions of Wǔgǔ include pastas such as noodles, wonton and spring rolls, buns and breads, many steamed, the use of soy and other Wǔgǔ in sauces and oils and as fermentation aids or principal ingredients in beer and alcoholic beverages, in tofu and cheese-like foods, steamed or boiled then possibly stir-fried or deep-fried or baked starch bases of meals such as fluffed rice, chow mein or puffed shrimp chips, gruels such as congee, and a wide range of savory, salty, sour, and sweet applications including fillings for pastries such as bean pastes of every available color in moon cakes and in ba bao fan (八寶飯) or "eight treasure rice" noted under Glutinous rice, as well as dilute beverages such as rice milk in which Wǔgǔ items may be suspended in water or otherwise in liquid solution.