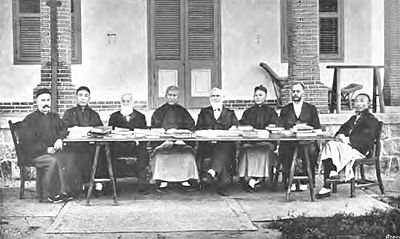 Chinese Bible translations mean all works on translating whole or parts of the Bible into the many dialects of Chinese language. The creation of Chinese Bible Translations began in the nineteenth century, but availability only became widespread in the early twentieth century.

The first translations of the Bible into Chinese were made by Catholic missionaries. However, they were only manuscript copies. The first Catholic Chinese Bible to be published was started by a young Franciscan friar named Gabriele Allegra, who began translating the Old Testament from the original Hebrew and Aramaic languages in 1935. Ten years later he recruited Friars Solanus Lee, Antonius Lee, Bernardinus Lee, and Ludovicus Liu in Beijing. However, due to the Chinese civil war in 1948, the friars were forced to move the Studium Biblicum in Hong Kong. After twenty years of effort, the first Old Testament was published in 1954. In 1968 the New and Old Testaments were published in a single volume. 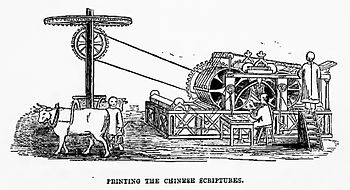 Protestant missionaries pioneered the translation of vernacular dialects, as well as the printing, and distribution of Bibles so that the knowledge of the Christian Gospel message could be more widely known in China.[2]

The first Protestant effort to undertake the work of translating the Scriptures for the Chinese was made by the Rev. William Willis Moseley, of Daventry, in Northamptonshire, England. He found, in the British Museum, a manuscript translation in Chinese of a Harmony of the four Gospels, the Acts, and all of Paul’s Epistles. He then published “A Memoir on the Importance and Practicability of Translating and Printing the Holy Scriptures in the Chinese Language; and of circulating them in that vast Empire”. Copies of this memoir were sent to many Christian leaders.

The Archbishop of Canterbury recommended that the Society for the Promotion of Christian Knowledge print the Chinese Bible; but, after four years deliberation, the project was abandoned. Then, a double effort was made, independently and almost simultaneously, to translate the Scriptures into Chinese. Soon after the formation of the Anglo-Hindoo College, of Fort William, in Calcutta, in 1800, a department was devoted to the translation of the Scriptures into Asian languages. The directors did not limit themselves to the Indian vernaculars, but included in their purpose the preparation of a version in Chinese. Professor Hovhannes Ghazarian (Lassar), an Armenian, born and educated in Macau, began the work by translating the Gospel by St. Matthew, which he finished in 1807.[3] After this, Prof. Ghazarian removed to Serampore, where the work was continued under the special care of Dr. Joshua Marshman, the New Testament being published in 1813, and the whole Bible in 1822, by the liberality of the British and Foreign Bible Society. This was the first known entire printed version of the Scriptures in Chinese ; and its production was by the Baptist missionaries of Serampore. The version was imperfect, as all first versions are; but Marshman spent sixteen years in its production.

While Marshman's work was progressing at Serampore, a similar undertaking—a translation of the entire Bible into Chinese—was completed in China itself. In 1807 the Rev. Robert Morrison arrived in Guangzhou as the representative of the London Missionary Society as the first Protestant missionary to China. The special work assigned to him was the translation of the Scriptures, because the public preaching of the Gospel in the towns and cities of the Chinese Empire was prohibited by the Chinese Government. Before leaving England he made a copy of the manuscript Harmony of the Gospels already referred to, which he took with him to China, and which he subsequently used as the basis of his translation of the New Testament, completed in 1813. Just at this time he was joined by the Rev. William Milne, but, because of the Roman Catholic Government of Macau, he was, a few days after his arrival, compelled to leave China and go to Malacca. Though separated, the two friends co-operated in translating the Old Testament; Milne translated the historical books and the Book of Job; the other books were translated by Morrison. The task was finished in November, 1819, and the whole underwent revision at the hand of Morrison. It was printed from wood blocks and published, in 21 volumes, in 1823.

Marshman was glad to hear that Robert Morrison had made an independent translation, stating that if they profited by each other’s labors, the translation of the Scriptures into Chinese would be brought to as great perfection in twenty years as they might have been in the hand of one for the space of fifty. These two translators were, however, never able jointly to compare and revise their work ; but the American Baptist Board of Foreign Missions requested the Rev. Josiah Goddard, one of their missionaries, to revise the whole of Dr. Marshman s translation. He published the revised version of the New Testament in 1853, fourteen years after his arrival in China. At his death it was found that he had made only a little progress with the Old Testament, and his labors were continued by the Rev. Dr. Dean, of the same mission, residing at Bangkok. A further revision of Marshman’s New Testament was made by an English Baptist missionary the Rev. T. H. Hudson and published in 1867. 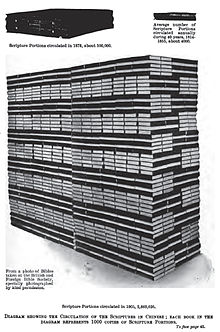 Illustration of the distribution of Bibles in China up to 1908

Morrison’s version, like that of Marshman, had defects. It was, however, faithful to the original. Morrison himself made preparation for a revision. In a letter to the Bible Society, he wrote ; "I make it my daily study to correct the Chinese version of the Scriptures; and my brethren of the Ultra-Ganges Mission are requested to note down whatever may occur to them as an error or imperfection in the translation. These are sent to the college and preserved, or immediately employed, as may appear best." He hoped that his son, John Robert Morrison, who gave him promise of being a great Chinese scholar, would at some future time revise Morrison and Milne’s Translation. This wish was about to be carried into effect, when the death of Morrison frustrated the plan; for the son, having succeeded to his father s office as Government translator, did not have time to devote to the work.

The production of this most important version, and the numerous and successive editions through which it passed, was mainly due to the aid of the British and Foreign Bible Society, who contributed more than 10,000 pounds for the translation and circulation costs.

The next new translation was made by Walter Henry Medhurst, Karl Gutzlaff, and Elijah Coleman Bridgman. J.R. Morrison devoted what time he could spare from his official duties to perfect the translation. These men completed the New Testament in 1835 ; it was adopted by their colleagues, and was the chief version used, in the next ten or twelve years, by Protestant missionaries in China. Although nominally the work of the above-named committee, the version was chiefly made by Medhurst, and underwent a final revision by him in 1836. He also took part in the translation of the Old Testament published by Gutzlaff in 1840. In addition to translating the Old Testament, Gutzlaff modified the version of the New Testament which he and Medhurst had prepared jointly ; and he printed some twelve editions of it, each edition being revised and improved.

The first meeting of the delegates was held in June,1847, the members of the committee being Bishop Boone, of the American Episcopal Mission, and the Rev. Dr. Medhurst, of the London Missionary Society, both living in Shanghai ; the Rev. W. Lowrie, of the American Presbyterian Mission, Ningbo ; the Rev. John Stronach, of the London Missionary Society, Amoy ; and the Rev. Dr. Bridgman, of the American Board of Commissioners for Foreign Missions, Guangzhou. Mr. Lowrie was drowned shortly after the work was begun, and the Rev. William Charles Milne was elected to fill his place. Bishop Boone never attended a meeting of the delegates after the first chapter of St. Matthew s Gospel was finished, and Dr. Bridgman never made a suggestion which his colleagues could accept ; and when the version was finished he repudiated all responsibility for it, so that the translation was virtually the work of the English missionaries Medhurst, Stronach, and Milne.

The committee, aided by several native scholars (principally the Chinese scholar Wang Tao), continued their work daily, from 10.00am to 2pm, almost without intermission. The translation of the New Testament was finished in July, 1850. It was published with the approval of the delegates, and is known as “The Delegates Version”.

Soon after the publication of this New Testament, a revision of the Old Testament was commenced, but owing to a division among the members the committee separated, and the result was two versions. One was made by the English missionaries Medhurst ; Stronach, and Milne, and has been called The Delegates Version, although this title is not strictly accurate; yet as the actual translators were the same as those who executed The Delegates Version of the New Testament, and as the style is uniform with it, the one title has been given to the whole Bible. The translation of the Old Testament was completed in 1853.

The other version was made by Dr. Bridgman and Dr. Michael Simpson Culbertson, American missionaries who withdrew from the committee of delegates. Besides these five versions of the whole Bible in classic style, the New Testament has been translated by Archimandrite Gury (Karpov), head of the Russian (Greek) Mission in Beijing and published in summer of 1864. In addition to these literary versions, translations have been made into several of the dialects of the Empire. The most important of these were the Anqing and Beijing Mandarin versions.

Dr. Medhurst translated the Old Testament into Anqing Mandarin, and in concert with the Rev. J. Stronach carried out the translation of the New Testament in the same dialect, the entire Bible being published in 1856 at the cost of the Bible Society. In 1865 a committee was appointed in the capital to translate the New Testament into Beijing Mandarin, The members of the committee were the Rev. John Shaw Burdon, of the Church Missionary Society; the Rev. Joseph Edkins, of the London Missionary Society; the Rev. Dr. Samuel Isaac Joseph Schereschewsky, of the American Episcopal Church; the Rev. Dr, William Alexander Parsons Martin, of the American Presbyterian Mission ; and the Rev. Dr. Henry Blodget, of the American Board of Foreign Missions. They were six years completing their task. The Old Testament in the same dialect was translated by Dr. Schereschewsky for the American Bible Society, and published at its cost in 1875.

One of the enterprises that has been carried out in China by the National Bible Society of Scotland was the translation of the New Testament by the Rev. Griffith John of Hankou. Scholars in China acknowledged the Delegates version to be a masterpiece of Chinese composition; but that version contained many faults of the older versions ; while the style of the composition was too learned to be readily understood by the Chinese. On the other hand, the Mandarin colloquial version was not in a style which Chinese think should be employed in writing on a sacred subject. John’s translation struck a happy medium between the two. 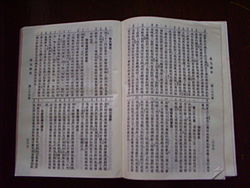 Chinese Bible used by the Filipino-Chinese Anglican Community in Saint Stephen's Pro-Cathedral under the Episcopal Church in the Philippines.