The Korean Jindo Dog (Hangul: 진돗개; Hanja: 珍島狗) is a breed of hunting dog known to have originated on Jindo Island in South Korea. Brought to the US with Korean immigrants, it is celebrated in its native land for its fierce loyalty and brave nature. The Jindo breed became recognized by the United Kennel Club on January 1, 1998 [1] and by the Fédération Cynologique Internationale in 2005.[2][3]

Jindos are medium-sized, double-coated spitz-type dogs. Much as the Dingo developed in Australia, the Jindo Gae is the natural or feral dog of a particular island of Korea. Distinguishing the Jindo breed from mixes and other breeds is often done by close examination of cranial and facial features and by analyzing the proportion of the head to the body. In addition, the breed exhibits sexual dimorphism with females having more angular heads than males.[4] The keen and alert appearance of the Jindo gives the impression of intelligence, strength, and agility.

The KNDA also recognizes a third body type called Gakgol which is a gradually emerging combination of the two traditional types, retaining the length of body of the Hudu and the depth of chest of the Tonggol.

In regards to the Jindo's body appearance, the United Kennel Club currently states, "The squarely built Jindo has a chest that is moderately deep but not too broad. At its deepest point the chest reaches to, or just above, the elbow. The brisket is well developed and the ribs are well sprung. The back is strong and straight and the loin is well muscled, taut, lean and narrower than the ribcage. There is considerable tuck up." [5]

The Korean Jindo Dog is well known for its unwavering loyalty and gentle nature. Because of this, there is a misconception that a Jindo will be loyal only to its first owner or the owner they bonded to when young.[6] However, there are many examples of older Jindos being adopted out of shelters in the United States and becoming very loyal friends to their new owners. They are highly active and are certainly not indoor-only dogs. Jindo dogs need reasonable space to roam and run. Jindos require a lot of care and attention. If kept in a yard, the fencing must be at least 6 feet high due to their strong hind legs that enable them to jump high.

Because the Jindo is an active and intelligent dog, it requires frequent interaction with people or another dog in the family. For some the Jindo may even be too intelligent, for it will commonly think for itself. The same intelligence that allows the dog to learn commands and tricks very quickly can be a bit too much to handle. If left alone for a long stretch, it finds its own entertainment. A young Jindo may attempt to climb over a fence or wall, even by way of a tree or digging under, or tear up the house if confined indoors. Because of this many Jindo dogs are found in animal shelters, abandoned by owners who often did not know what they were getting into when accepting the responsibility of a Jindo. 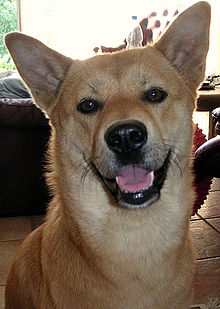 Jindos serve as excellent watchdogs, able to distinguish family from foe, friends from strangers. The Korean Army is known to use Jindos as guard dogs at major bases. Because Jindos rarely bark aggressively, especially in familiar environments, an owner may lend special credence to the warning of his/her pet. Many Jindos do not take any food from anyone other than their owners.[7]

Some Jindos display a curious aversion from running water and avoid situations that might get them wet. They let themselves be washed, although with great reluctance. Some may even be afraid of going out in the rain, which could lead to some difficulties.

People adopt Jindo dogs because of their beautiful appearance, high intelligence, loyalty, and sometimes for their fighting spirit, then quickly realize that raising a Jindo dog to be a well-behaved member of the family takes a lot of effort and time. Potential owners who are prepared and determined to have an intelligent, loyal, but independent companion can adopt a Jindo dog from shelters.

Weight should be in proportion to the height, giving a well-muscled, lean appearance without being too light or too heavy. The typical weight range for a male Jindo in good condition is 40 to 60 pounds or 18 to 27 kilos; for a female, 35 to 55 pounds or 16 to 25 kilos.

There is no written record of the origin of the Korean Jindo Dog, but many authorities agree that the Jindos originated and existed on Jindo Island for a long time. There have been many theories regarding the origin of Jindo Dog. One of the theories describes Jindo as cross-breeds with Mongolian dogs when Mongol forces invaded Korea around the 13th century.[9]

It is now protected under the Cultural Properties Protection Act.[10]

In 1962, the Government of South Korea designated the Jindo as the 53rd 'Natural Treasure' (or translated as 'Natural Monument') (천연기념물; 天然記念物)[11] and passed the Jindo Preservation Ordinance. Because of the special status of the Jindo, it is very difficult to export purebred Jindo outside of Korea.[12] Jindos marched in the opening ceremonies of the 1988 Summer Olympic Games in Seoul, Korea. The United Kennel Club recognized the Jindo on January 1, 1998.

The Jindo Dogs Guild of Korea(한국 진돗개 조합), as of 2008, issues certificates of pure Korean Jindo Dog, which specifies the registered number of the mother, sex, and birth date of the dog, as well as breeder's address and whether the dog is of purebred.[7]

It is claimed that the first appearance of the Jindo in the West was in France.[13] It is reported that there are 25 Jindos in the United Kingdom.[14] Also, the Korean government and Samsung have contributed to efforts to gain international recognition for the Jindo.[15]

The Jindo are renowned for their outstanding hunting ability, due to their courage, cunning, and pack sensibility. Besides the usual prey of medium to large game, their hunting prowess is displayed in a legend of three Jindos that killed a Siberian tiger.

They have mainly been used as deer and boar hunters. There have been anecdotal reports of Korean owners being awakened by their Jindo one morning to be led deep into the forest to a deer the dog had taken down alone. There have also been reported cases in America of intruding coyotes being killed by Jindos defending their territory.

In traditional Korean hunting without guns, a pack of well trained Jindos was extremely valuable. A master with a loyal pack could hunt without much trouble at all, for when the pack brings down a deer, boar or other target, one of them returns to the master to lead him to the prey, while the others stand guard against scavengers.

In a 2009 interview with Korea Economic Daily (한국경제), Bak Nam-sun (박남순), an expert search dog handler in South Korea, testified that Jindo dogs are not fit as rescue dogs and search dogs. It is because Jindo dogs' hunting instincts are too strong (they can forget their mission because of their hunting instincts), and they usually give their loyalty only to the first owner, while handlers of search dogs and rescue dogs can frequently change.[16]

In 2010, Son Min Suk (손민석), a member of Korean Security Forum, wrote that most of Korean military dogs were German Shepherds, and that Jindo dogs were not fit for military dogs as they were highly likely to escape their duties to find their first handlers who might be discharged from military services, or to come back to their original home.[17]

However, efforts to train Jindo dogs as search and rescue dogs continue. In October 2010, the Los Angeles Police Department announced their intent to evaluate the Jindo dog breed for law enforcement service, specifically for patrol and detection service. Four selected Jindo puppies would be distributed to LAPD and Glendale California Police Department to be trained as K9 units.[18] After a year of trying, the trainers found that the dogs did not have the right disposition for police work because they were too easily distracted and too eager to please their masters.[19]

Anecdotes on loyalty of jindos

In 1993, a 7-year-old female Jindo named Baekgu (백구; 白狗; translated as a White Dog), raised by Bak Bok-dan (박복단), an 83-year-old woman in Jindo Island, was sold to a new owner in the city of Daejeon which is located about 300 km (180 mi) away from the island. The dog escaped her new home and returned to her original owner, Bak, after 7 months, haggard and exhausted. Baekgu remained with her original owner, who decided to keep the loyal dog, until the dog died of natural causes 7 years later. The story was a national sensation in Korea and was made into cartoons, a TV documentary, and a children's storybook.[20] In 2004, Jindo County erected a statue of Baekgu in her hometown to honor the dog.[21]

Another Jindo, also named Baekgu, a 4-year-old male at the time who lived alone with his owner Park Wan Suh (박완서) residing in Jindo Island, did not eat anything and mourned for his dead owner for seven days after the owner died from a liver disease in June 2000.[22] According to Chosun Ilbo, the dog accompanied his dead owner for three days until other people came to find the body, followed the owner to his funeral, and came back home, not eating anything for four days. The Korean Jindo Dog Research Institute (진돗개 시험연구소) brought him under its care, but a person related to the Institute announced that the dog would not interact with anyone except for his feeder as of 2005.[23]