China at the 2010 Winter Olympics

China at the 2010 Winter Olympics

China participated at the 2010 Winter Olympics in Vancouver, British Columbia, Canada, sending its largest delegation at a Winter Olympics with 94 athletes. China had its best ever Winter Olympics medal finish, winning five gold medals and eleven in total, finishing seventh in the medal standings.

China won its first ever gold medal in figure skating when Shen Xue and Zhao Hongbo set a new world record for the overall combined score in pair figure skating. It was the first time since 1960 that a Russian, Soviet, or Unified Team flagged team did not win the gold medal.[3] China also won its first ever team Winter Olympic medal in the women's curling event with a bronze. The women's short track speed skating team swept the gold medals in all four events. China also won three medals in freestyle skiing aerials.

Xiao Tian, deputy chef de mission of the Chinese delegation, described the outcome as an "important breakthrough" for China in winter sports.[4]

At the 2006 Winter Olympics in Turin, 76 athletes competed in 48 events within nine disciplines and won two gold, four silver and five bronze medals.[5] In an attempt to surpass that achievement, China sent 94 athletes to Vancouver, its largest delegation ever.[6]

According to He Zhenliang, China's senior International Olympic Committee member and the honorary president of the Chinese Olympic Committee, the insufficient participation in Winter Olympic sports by "ordinary [Chinese] people" is still limiting the country's success in the Winter Games and is also discouraging any attempt to bid to host a future Winter Olympics.[7]

The Chinese Olympic Committee had high expectations in particular for the country's men's and women's aerials teams; in 2003 they hired two coaches, American Peter Judge and Canadian Dustin Wilson, to lead an effort to revamp China's aerial training program, and by January 2010, the top four women and five of the top seven men in the sport were Chinese.[8] Only two teams—those from China and the United States—qualified four male and four female skiers in the event. Aerials skiier Han Xiaopeng, winner of the gold medal in his sport at the 2006 Olympics in Turin, was chosen as China's national flag bearer for the 2010 opening ceremony.

The athletes entering the stadium during the opening ceremonies. 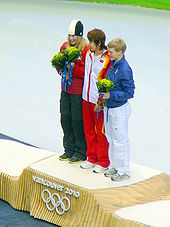 Wang Meng (centre) at the medal presentation for the 500 metres.

The following Chinese athletes won medals at the games:

China has qualified one entrant in ladies singles, three in pair skating, and one in ice dancing for a total of nine athletes.[13]

The following is the Chinese roster in the women's ice hockey tournament of the 2010 Winter Olympics.[14]

China played in Group B.

China has 10 qualified teams to this sporting event.

Key: Q=Qualified for next round, QF=Qualified directly for the final