China's Famous Teas (中国名茶) or The Ten Great Chinese Teas (中国十大名茶) is a list of ten notable Chinese teas. Contrary to popular belief, there is no steadfast list. The list varies considerably depending on the area where it is compiled and the current trend of tea consumption.[1] 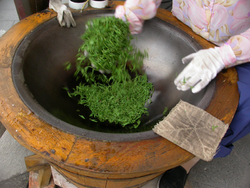 Different sources cite different teas, but the following table compiles twenty different such lists and ranks the teas upon recurrence. 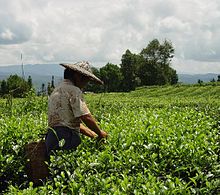 A woman is picking up Huang Shan Mao Feng Tea

There are no particular concepts to judge whether the tea is great or not. However, there are some basic characteristics a 'great tea' must be followed: each of them should have its own unique style, mainly in the color, fragrance, taste and the shape of the tea.

Here are some descriptions about two most famous teas which are well-known among individuals.

West Lake (Xihu) Longjing, the China's most famous tea, is produced in the mountains around the West Lake in Hangzhou, Zhejiang Province. West Lake is famous not only due to its sense of beauty, but also the acclaimed Longjing tea around the world. West Lake (Xihu) Longjing has thousands of years of history. It is renowned starting from the time of the Tang dynasty. Longjing tea has sharpened and flat leaves. The color of the leaves is green with yellow. After brewing, the tea aroma can last for a long time; the color becomes almond green, clear and bright. When drinking with it, the fresh tastes will surely attract you. People praise Longjing tea as 'the gold bud' and 'the world unparalleled'. It becomes the China's national tea. [3]

It is one of the most famous green tea in China, produced in Tai Lake, Dongting mountain, Suzhou, Jiangsu province. 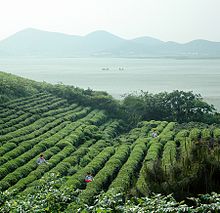 Bi Luochun leaves appear slender, curled, verdurous and tiny fluffies can be observed. When brewing the high quality Bi Luochun, we can first get water and then add the tea in, the leaves are still going to slowly sink. Dongting Bi Luochun is distinctive and world famous. It is not only well-selled in demestic market, but also exported to Japan, the United States, Germany, Singapore and more other countries as advanced gifts.