Traditionally included as one of the "big 3" Chinese automakers,[1] Dongfeng is currently in the top 4 along with Chang'an Motors, FAW Group, and Shanghai Automotive Industry Corporation.[2] As well as buses, trucks, and cars sold eponymously at home and abroad,[3] it also manufactures parts.[4]

Dongfeng is the Chinese partner in many joint ventures with foreign companies. As of 2011 it has more Sino-foreign joint ventures than any other Chinese automaker.[1]

In 2010, the company sold 2.72 million units,[5] making it the second most-productive Chinese vehicle-maker.[6] It reported 1.72 million sales of passenger vehicles that same year.[7] 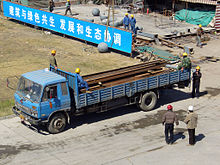 Dongfeng truck during the construction of Beijing's "Water Cube" 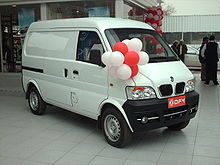 Known as "Second Automobile Works" until 1992,[8] Dongfeng, or "East Wind" in Chinese,[citation needed] was founded in 1969.[1] Its origins lie in a dictate of Chairman Mao Zedong; as part of his "Third Front" strategy, its far inland location in Hubei Province was meant to protect it from foreign invasion.[1] Traditionally manufacturing commercial vehicles, by 2001 these made up about 73% of Dongfeng's production.[9]

Eventually rising to become the second-largest domestic automobile manufacturer in China,[10] between 1978-1985[11] alongside the market-based Chinese economic reforms instituted by Deng Xiaoping Dongfeng was transformed from a manufacturer of two heavy-duty trucks[1] into a unified, centrally managed enterprise.[11] This process included making Dongfeng the center of six vehicle production bases that produced trucks from parts provisioned by Dongfeng[12] and placing companies controlled by provincial governments under Dongfeng management.[13] Post-1985, further reforms that allowed Dongfeng greater autonomy took place: the company was removed from the direct administrative control of the central government.[13]

By the mid-eighties its assets had tripled from those initially given to it by the state in 1981, and management was desirous of even greater production capacity.[14] But in 1995 the company was experiencing financial difficulties as was the case with many automobile manufacturers at this time.[4] The situation was still dire in 1998 precipitating a 1999 restructuring of the company.[1]

The Chinese partner in many Sino-foreign joint venture companies, Dongfeng initiated most of these cooperative efforts with foreign firms in the early 2000s. But its first was established in 1992 with French PSA Group. Known as Dongfeng Citroën Automobile Company (DCAC), it was the forerunner to the current Dongfeng Peugeot-Citroën Automobile (DPCA).[15] By 2003 Dongfeng had established joint ventures with Kia Motors (Dongfeng Yueda Kia Automobile Company, 2002[16]), Honda (Dongfeng Honda Automobile, 2003[17]), and Nissan (Dongfeng Motor Company, 2003[18]). As of 2011 it has more Sino-foreign joint ventures than any other Chinese automaker.[1]

Dongfeng was asked by the state in 2009 to help spearhead further consolidation efforts in the sprawling Chinese auto industry.[19] That same year, it sold 1.9 million vehicles[20] ranking second among domestic automakers[10] and third overall.[2]

Conflicts with the State

Once considered a discrete entity by the state for planning purposes in the 1980s,[14] this state owned enterprise[21] has come into conflict with authority at both the national and provincial levels.[22] Alongside First Automobile Works it saw the successful dismantling of the Automobile Corporation, a central government entity presumably tasked with preventing non-competitive business practices through dictating output volumes and curtailing purchasing, as well as exasperation at the right of the State to make managerial appointments.[14]

At the 2010 Beijing Auto Show Dongfeng showed an electric vehicle concept car, a physical representation of its vow to bring an electric car to market by 2015. China subsidies oil, an incentive for the State to spur alternative energy vehicle development, and Chinese automakers see opportunities in less mature electric vehicles because Western companies have yet to develop much of a lead in the technology.[23]

Dongfeng Motor Corporation has at least three listed subsidiaries in which it has majority ownership.

Currently selling under only one own brand, newer Nissan technology will underpin Dongfeng sales starting in 2012.

2009 saw the release of an own-branded sedan, the Fengshen S30.[26] Dongfeng-made passenger vehicles were, until the S30, all made by Chinese-foreign joint ventures and carried foreign brand names.[citation needed] These JVs continue to produce the great majority of its passenger products as of 2010.[26]

Own-brand models now include a hatchback as well, the Fengshen H30.[26]

A Dongfeng/Nissan own brand with cheaper offerings and ties to a famous-name foreign automaker that are attractive to the less-affluent inland city consumer,[27] Venucia (Qi Chen) is expected to sell new models (based on old Nissan technology[citation needed]) starting in 2012.[28]

The name is derived from that of the Roman god of beauty, Venus.[28]

Dongfeng is the Chinese partner in many joint ventures that make trucks and cars.

Dongfeng established its joint venture with American parts-maker Dana Corporation, Dongfeng Dana Axle Co, c. 2005.[32] As of 2011, Dana and Dongfeng both have 50% ownership of this joint venture.[33]

Based in Wuhan, Hubei province,[34] Dongfeng Honda Automobile Company was established in 2003[34] and manufactures Honda-branded SUVs and automobiles for the Chinese-market.[35] Products produced by this joint venture with Honda[35] include the Honda Civic hybrid[36] and the CR-V.[37] Dongfeng also owns 10% of Honda's importer in Guangdong Province, Honda Automobile (China) Company.[citation needed]

In 2010 its model line included what was China's most-purchased SUV that year, the CR-V.[38] Other Honda-branded models sold in China are made by Guangqi Honda Automobile (of the Guangzhou Automobile Group), but in 2004 Honda made an agreement that allowed it to sell Dongfeng-built CR-Vs through Guangzhou's showrooms.[39]

A joint venture with the Korean Kia Motors, Dongfeng Yueda Kia Automobile Co is based in Yancheng, Jiangsu province and produces Kia-branded automobiles for the Chinese market.[40]

While Kia car assembly began at a non-Dongfeng affiliated company[citation needed] with the Kia Pride in 1997 at Jiangsu Yueda Auto Works, an equally owned partnership (Yueda Kia Motors) was formed in 1999, and Dongfeng took over half of Jiangsu Yueda's ownership of that in March 2002.[41] Kia has a 50% share while Dongfeng and Jiangsu Yueda Investment Co Ltd (SSE: 600805) each hold 25% ownership.[42]

The company has two production bases in China.[44]

Nissan and Dongfeng have a long-standing relationship. Early on, the Chinese company produced diesel-powered Nissan trucks built from complete knock down kits, and Nissan has lent Dongfeng technical assistance.[45] When the Chinese State began allowing foreign automakers access to its market though joint ventures with Chinese companies, Nissan chose Dongfeng.[citation needed] It remains the only Chinese partner of Nissan[46] although each foreign automaker is allowed two Chinese partners.[40]

Established in 2002[9] and beginning operations with Nissan in July 2003,[47] Dongfeng Motor Co Ltd manufactures Dongfeng-branded heavy trucks, Dongfeng and Nissan-branded light commercial vehicles, and passenger vehicles[48] for the Chinese market. A few of its Dongfeng-branded light commercial vehicles have been exported to Afghanistan, Pakistan, Africa, and the Middle East.[49]

It is equally owned by Dongfeng Motor Group Co and Nissan China Investment Co,[48] and as of 2010 it is the largest joint venture automobile manufacturer in China.[50] 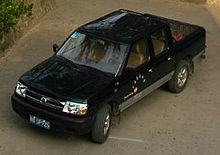 Other joint ventures include the Dongfeng Nissan-Diesel Company, which produces heavy trucks, and Dongfeng Nissan Passenger Vehicle Co, a unit of Dongfeng Motor Company[51] that makes automobiles for the domestic market and has exported to Egypt.[52] Another unit of Dongfeng Motor Company, Zhengzhou Nissan Automobile Co, manufactures light commercial vehicles.[53] Most Zhengzhou products are sold under the Dongfeng brand, such as the Dongfeng Rich (Rui Qi),[54] a reworked Nissan D22.[55]

Infiniti-branded vehicles are most probably imported.[56]

Dong Feng Peugeot Citroën Automobile Company is a joint venture with PSA Peugeot-Citroën set up in 1992 and based in Wuhan, capital of Hubei province.[57]

Currently selling a range of Peugeot and Citroën models, its first offering was a hatchback built from semi-complete knock-down kits, the ZX Fukang. Its first Peugeot-branded product was introduced in 2002.[57]

Some of the engines made by this joint venture are used in other Dongfeng passenger car products the Fengshen S30 and H30, for example.[58]

An equally owned joint venture with Taiwanese automaker Yulon Motors, Dongfeng Yulon[59] (or Dongfeng Luxgen[60] or Dongfeng Yulong[61]), was set up in 2009[62] and will manufacture Yulon's Luxgen models in China after the completion of a planned production base in the Hangzhou Xiaoshan Linjiang Industrial Zone in 2011.[59] The cars will be sold in China[63] and production capacity will initially be 240,000 units/year.[64] 120,000 of these units are vehicles and the other half engines.[65]

As of late 2010, 35 out of a planned 60 sales outlets have signed on to sell the Taiwanese cars. This JV is Dongfeng's second try at a cooperation with this Taiwanese company.[59]

Originating from Hubei province, Dongfeng now has sites in many places throughout China.

Joint venture sites are located all over China.

A joint venture with Nissan has a production base, Zhengzhou Light Truck plant, in Zhengzhou, capital of Henan province.[46] In 2010, this was joined by a second increasing production capacity by 120,000 units/year.[70] Production capacity figures may consider engines and vehicles as discrete.

A passenger-car production base[71] and technical center[72] in Guangzhou, Guangdong province,[71] is part of both the Nissan joint venture Dongfeng Motor Co[9] and a unit of that joint venture,[51] Dongfeng Nissan Passenger Vehicle Co.[73]

Another Guangzhou production base manufactures Nissan engines.[74] Yet another produces engines for the Dongfeng-honda joint venture.[39]

Its joint venture with Kia has two production bases the newer located in the Yancheng Economic Development Zone of Jiangsu province.[42]

An R&D center in Shanghai,[57] the China Tech Center, is wholly owned by PSA Peugeot Citroën[69] but lends assistance to Dongfeng's joint venture with this French automaker.

Dongfeng is involved in a number of ventures in foreign countries, including Indonesia and Myanmar.[75]

A Dongfeng subsidiary, Zhengzhou Nissan Automobile, in early 2011 signed a deal with AM Reguera, a Paraguayan company that assembles automobiles and makes appliances, for the manufacture of pick-up trucks scheduled to start in 2012 after construction of a production base in Capiatá.[76]