The energy policy of the People's Republic of China is a policy decided on by the Central Government with regard to energy and energy resources. The country is currently the world's largest emitter of greenhouse gases according to a Dutch research agency.[1][2][3] However, China's per capita emissions are still far behind some of the developed countries. In addition, China is also the world's leading renewable energy producer.[4]

CO2 emission per capita per year per country (2000 data)

On June 19, 2007, the Netherlands Environmental Assessment Agency announced that a preliminary study had indicated that China's greenhouse gas emissions for 2006 had exceeded those of the United States for the first time. The agency calculated that China’s CO2 emissions from fossil fuels increased by 9% in 2006, while those of the United States fell by 1.4%, compared to 2005.[10] The study used energy and cement production data from British Petroleum which they believed to be 'reasonably accurate', while warning that statistics for rapidly changing economies such as China are less reliable than data on OECD countries.[11]

Energy use and carbon emissions by sector

In the construction materials sector, China produced about 44% of the world's cement in 2006.[11] Cement production produces more carbon emissions than any other industrial process, accounting for around 4% of global carbon emissions.[11]

Although China has been taking action on climate change for some years, with the publication on June 4, 2007 of China's first National Action Plan on Climate Change, China became the first developing country to publish a national strategy addressing global warming.[17] The plan does not include targets for carbon dioxide emission reductions, but it has been estimated that, if fully implemented, China's annual emissions of greenhouse gases would be reduced by 1.5 billion tons of carbon dioxide equivalent by 2010.[17] Other commentators, however, put the figure at 0.950 billion metric tons.[18]

Publication was officially announced during a meeting of the State Council, which called on governments and all sectors of the economy to implement the plan, and for the launch of a public environmental protection awareness campaign.[19]

The National Action Plan includes increasing the proportion of electricity generation from renewable energy sources and from nuclear power, increasing the efficiency of coal-fired power stations,[20] the use of cogeneration, and the development of coal-bed and coal-mine methane.[18]

In addition, the one child policy in China has successfully slowed down the population increase, preventing 300 million births, the equivalent of 1.3 billion tons of CO2 emissions based on average world per capita emissions of 4.2 tons at 2005 level.[21] 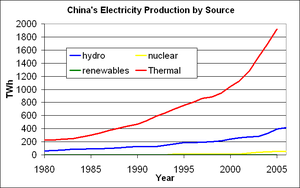 Electricity production in China by source.

In 2009, China's total annual electricity output was 3.71465 trillion kWh,[22] and the annual consumption was 3.6430 trillion kWh (second largest in the world).[23] In the same year, the total installed electricity generating capacity was 874 GW.[24] China is undertaking substantial long distance transmission projects with record breaking capacities, and has the goal of achieving an integrated nationwide grid in the period between 2015 and 2020.[25]

China currently generates around two thirds of its electricity from coal-fired power stations.[20] It is progressing with the construction of 562 new coal-fired plants over the next few years.[26] In June 2007, it was reported that an average of two new plants were being opened every week.[27]

China is the world's leading renewable energy producer, with an installed capacity of 152 GW.[4] China has been investing heavily in the renewable energy field in recent years. In 2007, the total renewable energy investment is $12 billion USD, second only to Germany, and expected to be first by 2009.[28] China is also the largest producer of wind turbines and solar panels.[29] Approximately 7% of China's energy was from renewable sources in 2006, a figure targeted to rise to 10% by 2010 and to 16% by 2020.[18] The major renewable energy source in China is hydropower. Total hydro-electric output in China in 2009 was 615.64 billion kWh, constituting 16.6% of all electricity generated. The country already has the most hydro-electric capacity in the world, and the Three Gorges Dam is projected to be the largest hydro-electric power station in the world, with a total capacity of 22.5 GW. It is expected to be fully operational by 2011.

China is the world's top coal producer and ranks third in the amounts of coal reserve. It is approximately self-sufficient in coal, with a production of 2.38 billion ton and a consumption of 2.37 billion tons in 2006.[32] China used to be a major coal exporter, but its export is decreasing and it may soon become a net importer.

China announced on June 20, 2008 plans to raise petrol, diesel and aviation kerosene prices. This decision appeared to reflect a need to reduce the unsustainably high level of subsidies these fuels attract, given the global trend in the price of oil.[35]

CNPC, Sinopec and CNOOC are all active in the upstream gas sector, as well as in LNG import, and in midstream pipelines. Branch pipelines and urban networks are run by city gas companies including China Gas Holdings, ENN Energy, Towngas China, Beijing Enterprises Holdings and Kunlun Energy. 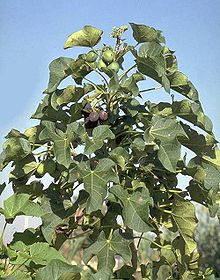 Jatropha curcas is to be grown for biofuel production
Main article: Biofuel

In 2006, 16 million tons of corn have been used to produce ethanol.[37] However, because food prices in China rose sharply during 2007, China has decided to ban the further expansion of the corn ethanol industry.

On February 7, a spokesman for the State Forestry Administration announced that 130,000 square kilometres (50,000 sq mi) would be devoted to biofuel production. Under an agreement reached with PetroChina in January 2007, 400 square kilometres of Jatropha curcas is to be grown for biodiesel production. Local governments are also developing oilseed projects. There are concerns that such developments may lead to serious environmental damage.[38]

China has become the world's largest consumer of solar energy.[39] It is the largest producer of solar water heaters, accounting for 60 percent of the world’s solar hot water heating capacity, and the total installed heaters is estimated at 30 million households.[40] Solar PV production in China is also in rapid development. In 2007, 0.82 GW of Solar PV was produced, second only to Japan.[4]

As part of the stimulus plan of "Golden Sun", announced by the government in 2009, several developments and projects became part of the milestones for the development of solar technology in China. These include the agreement signed by LDK for a 500MW solar project, a new thin film solar plant developed by Anwell Technologies in Henan province using its own proprietary solar technology and the solar power plant project in a desert, haed by First Solar and Ordos City. The effort to drive the renewable energy use in China was further assured after the speech by the Chinese President, given at the UN climate summit on 22 Sept 2009 in New York, pledging that China will plan to have 15% of its energy from renewable sources within a decade. China is using solar power in houses, buildings, and cars.[41][42][43]

The General Work Plan for Energy Conservation and Pollutant Discharge Reduction aims to cut energy consumption per unit of gross domestic product (energy intensity) by 20% over the course of the Eleventh Five-Year Plan which ended in 2010, as well as cutting the discharge of major pollutants by 10%. Implementation involved a variety of measures, including increased use of renewable energy, revised pricing for primary energy sources and electricity, export restrictions on energy intensive and highly polluting products, and tax incentives for pollution-reduction projects. Central and local government will switch to low-energy lighting, and will be compelled to purchase only the most energy efficient and environmentally friendly electrical products.[46]

Officials were warned that violating energy conservation and environmental protection laws would lead to criminal proceedings, while failure to achieve targets would be taken into account in the performance assessment of officials and business leaders.[16]

After achieving less than half the 4% reduction in energy intensity targeted for 2006, all companies and local and national government were asked to submit detailed plans for compliance before June 30, 2007.[47][46]

During the first four years of the plan, energy intensity improved by 14.4%, but dropped sharply in the first quarter of 2010. In August 2010, China announced the closing of 2,087 steel mills, cement works and other energy-intensive factories by September 30, 2010. The factory closings were made more palatable by a labor shortage in much of China making it easier for workers to find other jobs.[48]

A State Council circular issued on June 3, 2007, restricts the temperature of air conditioning in public buildings to no lower than 26oC in summer (78.8oF), and of heating to no higher than 20oC (68oF) in winter. The sale of inefficient air conditioning units has also been outlawed.[49]

Another survey published in August 2007 by China Youth Daily and the British Council sampled 2,500 Chinese people with an average age of 30.1. It showed that 80% of young Chinese are concerned about global warming.[51]