Artificial T cell receptors (also known as chimeric T cell receptors, chimeric immunoreceptors, chimeric antigen receptors (CARs)) are engineered receptors, which graft an arbitrary specificity onto an immune effector cell. Typically, these receptors are used to graft the specificity of a monoclonal antibody onto a T cell; with transfer of their coding sequence facilitated by retroviral vectors. In this way, a large number of cancer-specific T cells can be generated for use as adoptive cell therapy. [1]. Phase I clinical studies of this approach show efficacy.

The most common form of these molecules are fusions of single-chain Variable fragments (scFv) derived from monoclonal antibodies, fused to CD3-zeta transmembrane and endodomain. Such molecules result in the transmission of a zeta signal in response to recognition by the scFv of its target. An example of such a construct is 14g2a-Zeta, which is a fusion of a scFv derived from hybridoma 14g2a (which recognizes disialoganglioside GD2). When T cells express this molecule (usually achieved by oncoretroviral vector transduction), they recognize and kill target cells that express GD2 (e.g. neuroblastoma cells). To target malignant B cells, investigators have redirected the specificity of T cells using a chimeric immunoreceptor specific for the B-lineage molecule, CD19. 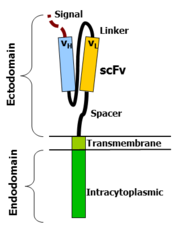 The variable portions of an immunoglobulin heavy and light chain are fused by a flexible linker to form a scFv. This scFv is preceded by a signal peptide to direct the nascent protein to the endoplasmic reticulum and subsequent surface expression (this is cleaved). A flexible spacer allows to the scFv to orient in different directions to enable antigen binding. The transmembrane domain is a typical hydrophobic alpha helix usually derived from the original molecule of the signalling endodomain which protrudes into the cell and transmits the desired signal.

The fact that these molecules actually work is at first glance surprising. At second glance one remembers that type I proteins are in fact two protein domains linked by a transmembrane alpha helix in between. The cell membrane lipid bilayer, through which the transmembrane domain passes, acts to isolate the inside portion (endodomain) from the external portion (ectodomain). It is not so surprising hence that attaching an ectodomain from one protein to an endodomain of another protein results in a molecule that combines the recognition of the former to the signal of the latter.

To more completely appreciate the engineering work that goes into these molecules, the different components will be discussed separately.

A signal peptide directs the nascent protein into the endoplasmic reticulum. This is essential if the receptor is to be glycosylated and anchored in the cell membrane. Any eukaryotic signal peptide sequence usually works fine. Generally, the signal peptide natively attached to the amino-terminal most component is used (e.g. in a scFv with orientation light-chain - linker - heavy chain, the native signal of the light-chain is used

A spacer region links the antigen binding domain to the transmembrane domain. It should be flexible enough to allow the antigen binding domain to orient in different directions to facilitate antigen recognition. The simplest form is the hinge region from IgG1. Alternatives include the CH2CH3 region of immunoglobulin and portions of CD3. For most scFv based constructs, the IgG1 hinge suffices. However the best spacer often has to be determined empirically.

This is the business-end of the receptor. After antigen recognition, receptors cluster and a signal is transmitted to the cell. The most commonly used endodomain component is CD3-zeta which contains 3 ITAMs. This transmits an activation signal to the T cell after antigen is bound. CD3-zeta may not provide a fully competent activation signal and additional co-stimulatory signaling is needed. For example, chimeric CD28 and OX40 can be used with CD3-Zeta to transmit a proliferative / survival signal, or all three can be used together.