Chilean Antarctic Territory
Not to be confused with Antarctica.

Antártica is a Chilean commune in Antártica Chilena Province, Magallanes and Antártica Chilena Region, which covers all of the Territorio Chileno Antártico—the territory in Antarctica claimed by Chile. It ranges from 53°W to 90°W and from the South Pole to 60°S, overlapping the Argentine and British Antarctic claims. It is administered by the Cabo de Hornos municipality in the South American mainland.

Antártica was created on July 11, 1961, and was dependent on the Magallanes Province until 1975, when the Antártica Chilena Province was created, making it dependent administratively on Puerto Williams, the province capital. 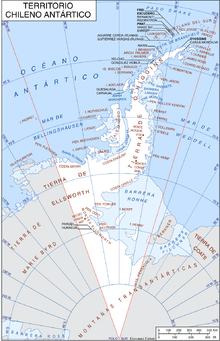 The largest population center is located on King George Island and consists of Frei Montalva Station, which has an airport (Teniente Rodolfo Marsh Martin Aerodrome, ICAO Code SCRM [1]), and which is connected to the communal capital, the village of Villa Las Estrellas, which has a town hall, hotel, day-care center, school, scientific equipment, hospital, post office and bank. This enclave is a center of logistical support for the other eight countries with scientific bases on King George Island.

Nearby Professor Julio Escudero Base, controlled by the Chilean Antarctic Institute (INACH), under the Ministry of Foreign Relations, is the main Chilean scientific facility in Antarctica.

Captain Arturo Prat Base is a Chilean Antarctic research base located on Greenwich Island. Opened February 6, 1947, it is the oldest Chilean Antarctic station. Until March 1, 2006, it was a base of the Chilean Navy, on which date it was handed over to the regional government of Magallanes and Antártica Chilena Region. Until February, 2004, it had been a permanent base. Afterwards, it had served as a summer base of ionospheric and meteorologic research. There have been plans to reopen the station for permanent occupation starting March, 2008.

The only permanent Chilean station on the Antarctic mainland (Antarctic Peninsula), O'Higgins Station has been in operation since February 18, 1948. It is located on Puerto Covadonga and it is the official communal capital.[citation needed] 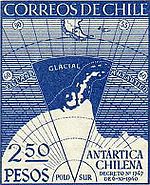 The commune is governed from Puerto Williams in the Cabo de Hornos commune from its municipal office located at O'Higgins 165.[1] Chilean law allows a municipality to govern more than one commune, however, this is the only such case. As a commune, Antártica is a third-level administrative division of Chile administered by a municipal council, headed by an alcalde who is directly elected every four years. The 2008-2012 alcalde is Hugo Henriquez Matus (PRSD).[2]

Within the electoral divisions of Chile, Antártica is represented in the Chamber of Deputies by Carolina Goic (PDC) and Miodrag Marinovic (Ind.) as part of the 60th electoral district, which includes the entire Magallanes and Antartica Chilena Region. The commune is represented in the Senate by Carlos Bianchi Chelech (Ind.) and Pedro Muñoz Aburto (PS) as part of the 19th senatorial constituency (Magallanes Region).