The Estadio Nacional Julio Martínez Prádanos is the national stadium of Chile. It is located in Ñuñoa (Greater Santiago). It is the largest stadium in Chile with an official capacity of 47,000,[2] and is part of a 62 ha sporting complex which also features tennis courts, an aquatics center, a modern gymnasium, a velodrome, a BMX circuit, and an assistant ground/warmup athletics track.

Construction began in February 1937 and the stadium was inaugurated on December 3, 1938. The architecture was based on the Olympiastadion in Berlin, Germany. The stadium became infamous after its use as a prison camp by the military regime following the 1973 Chilean coup d'état.

In 2009, a complete modernization plan was unveiled for the stadium and surrounding facilities. President Michelle Bachelet said it would become the most modern stadium in South America.[3]

It was built just south of where fields once were located Sports. Don Jose Domingo Canas in 1918 donated his farm "The Reeds" that were built Estadio Ñuñoa because sports culture that was born in Chile. Later, I Valdivieso Farm, owned at the time of the House of Labor Insurance (formerly of William Edwards), was transferred to the Treasury, where they finally built the National Stadium (Today Julio Martinez).

The "Colossus of Ñuñoa" was inaugurated on December 3 of 1938, with the friendly match between the Chilean club Colo-Colo and Brazilian club São Cristóvão with the triumph of the Chilean team 6-3.

Being President of the Republic Arturo Alessandri this "white elephant" as it once called Palma was devised and planned by the architect and urban planner Austrian Karl Brunner as a great sporting and recreational center for the capital, first under the Plan Intercommunal Metropolitan Santiago. In both its architectural design (taking as reference required by some the Olympic Stadium in Berlin since 1941 as an edition of the now defunct sports magazine "Arena" was inspired National Stadium at the Olympic Stadium of Amsterdam, used in the Olympics of 1928 This may be true since the images to compare the Chilean stadium is more like the Dutchman into German) is the property of architects Anibal Fuenzalida and Ricardo Alberto Muller Cormatches, which was built between 1937 and 1938.

The stadium hosted the final stages of the 1959 World Basketball Championship that was held outdoors due to the intended venue, the Metropolitan Indoor Stadium, not ready in time for the original date of 1958.

In the early 60's, under the government of Jorge Alessandri (son of Arturo Alessandri), began remodeling and expanding the stadium to host the 7th FIFA World Cup in 1962, to be carried out in the country. The main change was that the site suffered the velodrome that surrounded the stadium was replaced by galleries, thereby increasing its original capacity to around 95,000.

The stadium hosted the Group B consists of India, West Germany, Italy and Switzerland. Besides the games were quarterfinals in which the selected Czechoslovakia eliminated the Hungarian powerhouse for a minimum count, the semi-finals in which Brazil Chile eliminated by 4 goals to 2, the definition of the third and fourth place obtained by Chile against Yugoslavia with a goal in the final minute of Eladio Rojas and final in which Brazil was crowned world champion for the second time in history.

In 1962 the stadium was one of the four venues of the FIFA World Cup, hosting the opening game, a quarter final, a semi final, the third-place match, and the final. As such, it was the scene of the Chile national team's greatest-ever accomplishment: the 1-0 victory over Yugoslavia for third place on 16 June 1962. Today,it serves as the home field for both the national team and first-division club Universidad de Chile. It also holds some big non-sporting events, such as political celebrations, charity spectacles and concerts.

On July 5, 2008, the stadium was officially renamed Estadio Nacional Julio Martínez Prádanos, in honor of a recently deceased sports journalist.[4]

Use as prison camp 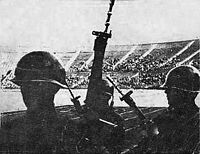 Estadio Nacional de Chile as a concentration camp after the 1973 Chilean coup d'etat.

After the coup d'état of September 11, 1973 that ousted President Salvador Allende, the stadium began to be used as a detention facility and torture camp. An article in Harvard Review of Latin America reported that "there were over eighty detention centers in Santiago alone" and gave details of the National Stadium and others.[5]

Over 40,000 people spent time in the compound during the junta regime. Twelve thousand detainees were interned between September 11 and November 7.[6] The field and gallery were used to hold men, while women were held in the swimming pool changing rooms and associated buildings. Locker rooms and corridors were all used as prison facilities while interrogations were carried out in the velodrome.[7] The Red Cross estimated that 7,000 prisoners occupied the stadium at one point, of whom about 300 were foreigners. According to the testimonies of survivors collected by the humanitarian group, detainees were tortured and threatened with death by shooting. Some were shot on the premises and then taken to unknown locations for execution.

FIFA president of the time Sir Stanley Rous insisted the USSR team play a World Cup qualifier at the time. The Soviets naturally refused and Chile qualified automatically for the 1974 World Cup, where they failed to advance from a group containing both FR Germany and the GDR as well as Australia.

It is sometimes mistakenly believed that Chilean folk singer and political activist Víctor Jara was murdered at Estadio Nacional. He was actually murdered at the formerly called Estadio Chile, which was renamed in his honor in 2003.[8]

The use of the stadium during the coup d'état is depicted in the 2002 documentary film Estadio Nacional, directed and produced by Carmen Luz Parot. It is also important to note the 1982 film "Missing" by Greek filmmaker Costa-Gavras, depicting the September 11, 1973 US Government led coup d'état and execution of American journalists Charles Horman and Frank Teruggi at the Estadio Nacional de Chile.

On June 15, 2009, President Michelle Bachelet announced several infrastructure improvements in order to modernize the stadium and its immediate facilities. Out of the total 24 billion pesos (US$42.3 million) contemplated in the plan, 20 billion pesos (US$35.3 million) are destined to bring the stadium up to modern standards. The changes include, a roof covering all the seats, which will also provide illumination; installation of seats around the entire stadium, lowering the current capacity to 47,000; a new state-of-the-art scoreboard; a 2.5 m deep 2 m wide pit will separate the track and the spectators to replace the fence; and several other changes. Because the stadium is a national monument the façade will remain the same, with the roof structure placed on top, without modifying the exterior. The stadium was closed on August 15, 2009. The stadium was scheduled to be reinaugurated in March 2010 to stage a double friendly match between Chile and North Korea and Panama, but the works were not finished on time. The construction of the roof has since been postponed by the government of President Sebastián Piñera due to financial constrains brought about by the February 27, 2010 earthquake. Although the stadium suffered minor damage from the earthquake, it partially opened to host the match between C.F. Universidad de Chile and C.D. Guadalajara for Copa Libertadores 2010. It was officially re-inaugurated on September 12, 2010, during Chile's bicentennial festivities.

On September 12, 2010, during the Chilean bicentennial festivities, President Sebastián Piñera announced that the capacity of the stadium will be increased so as to reach 70.000 seats for the 2014 South American Games that will take place in Santiago.[9] The works are expected to begin in 2012.[10]

On June 3, 2011 further renovation plans were announced by the government. The complete area surrounding the stadium will be turned into a park to be called "Citizenry Park" (Parque de la Ciudadanía). Over 70% of the new 64 ha. park will consist of green areas, and the rest will include new infrastructure such as a lagoon or restaurants. The new park is expected to be ready for the 2014 games. New sporting venues will be built for the 2014 games, such as two modern gymnasiums, a new temperate pool for synchronized swimming, a renovated velodrome and an expanded CAR, which will also serve as residence of the future Ministry of Sports. The only venues that will remain are the stadium, the main tennis court, the velodrome, the CAR, the athletics track, the skating track, the hockey field and the caracolas.[11]

The highest attendance for a match at Estadio Nacional to date is 85,268, for a Primera Division match played on December 29, 1962; Universidad de Chile defeated Universidad Catolica 4-1.[citation needed].

The first and only concert by the King of Pop Michael Jackson at the stadium, held on October 23, 1993 during his Dangerous World Tour, met a total of 75,000 people, more than any other solo artist in the history of the venue.

As of concert, the highest attendance was on February 26, 2006, when 77,345 people attended U2's concert as part of their 2006 Vertigo Tour. The first 70,000 tickets that were put on sale sold out in 4 days (between January 11 and January 15 that year), and on January 30 was announced that 7,000 restricted vision tickets would be released early February, and by the concert day, 7,000 of them were sold.[12] Fans from all over the continent started arriving to the stadium on February 25 holding "Main court" tickets, due to the possibility to the first 4,500 fans to access the Golden Circle section, which was the nearest section to the stage, and described by Paul McGuinness as a "fan-only zone". However, U2 broke their own record on March 25th 2011 when 77,765 people attended a concert as part of their U2 360° Tour. [13]

It was built with an original capacity of 48,000 spectators in 1937, at the time was called "white elephant" because it was thought could never be filled.

For the 1962 FIFA World Cup its capacity was expanded to comfortably seat 74,000 people may go to more than 80,000 people, for it eliminated the cycling track that was moved to another location. Over the years, visits were reduced in order to keep escape routes clear and prevent accidents.

For the 2000 World Junior Championships in Athletics, it required the installation of individual seats which reduced its capacity to 66,000 spectators with which you can not get a larger audience as was the visit of the Pope in 1987 (believed to be attended by more 90 thousand people, could not be counted accurately and that attendance was free, with no control) or the closing of the Telethon.

The current capacity is 66,660 spectators, divided as follows:

Among the most important artists and acts to have performed at the stadium, are: