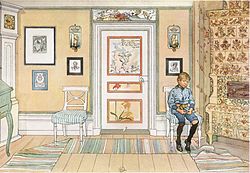 Timeouts are often known as the naughty chair or naughty step, a term popularized by Jo Frost of Supernanny.

The concept of time-out was invented, named, and used by Arthur Staats in his extended work with his daughter (and later son), and was part of a long-term program of behavioral analysis beginning in 1958 that treated various aspects of child development. He introduced various elements that later composed foundations for applied behavior analysis and behavior therapy (the token reward system was another invention). Montrose Wolf, a graduate student assistant of Staats on several studies dealing with reading learning in preschoolers (see, for example, Staats, A.W.; Staats, C.K.; Schultz, R.E.; Wolf, M.M. "The conditioning of textual responses using 'extrinsic' reinforcers."), used that background when he went to the University of Washington where he began his creative program of research. Wolf first used Staats' time-out procedure in a 1964 published study dealing with the behavioral treatment of a child.[1][2]

Staats used the term in his 1968 book, Learning, Language and Cognition.[3] Staats described the discipline of his 2-year old daughter in 1962: "I would put her in her crib and indicate that she had to stay there until she stopped crying. If we were in a public place [where her behavior was inappropriate], I would pick her up and go outside [until she indicated she would stop the offending behavior]." In brief, he "intended time-out to constitute a very mild punishment, the removal from a more reinforcing situation." This has the effect of weakening the offending behavior so that it occurs less frequently, quickly disappearing unless the behavior has been well learned.

Time-outs are recommended for toddlers and younger children. The purpose is to isolate or separate the child for a short period of time in order to allow the child to calm down, as well as to discourage inappropriate behavior.

Time-outs may be on a chair, step, corner or any other location where there are no distractions. The child should be old enough to sit still and is required to remain there for a fixed period as a punishment and to allow them time to reflect on their actions and consequences of it. The procedure has been recommended as a time for parents to separate feelings of anger toward the child for their misbehavior, replacing yelling with a calmer and more predictable approach.

To be most effective, parents should evaluate each situation to determine what may be causing the misbehavior, such as a toy, frustration, hunger or lack of sleep. Parents should also explain why the child was put there, in order to make it an opportunity for learning, and how long he needs to stay there.

In some views, the only requirement for release is for the child to be sitting peacefully, while others advocate a set period of time. When the child has calmed down, they may then express their needs in a more polite manner or return to their activity. Jo Frost recommends one minute per year of age.[4]

While some proponents of time-outs insist on silence and stillness from the child during the time-out, it is easier to use a "release-contingency," such that the requirement is only that the child is sitting peacefully at the end of the time-out period. Those who use time-out for children to get anger and frustration "out of their system" or for children to think about their behavior, are using time-out in a way that is different than those basing it on operant behavioral principles (that time-out/away from reinforcement may reduce recurrences of the unwanted target behavior).

Some[who?] of those in favor of spanking have argued that time-outs are ineffective and argue that it should be seen as a complement rather than as an alternative to spanking; a spanking may be preceded and/or followed by a time-out 'to think about what you did'; some individual[who?] order time-out to be spent divested as during spanking, even exposing the reddened bare bottom afterwards, with the hope of making the punishment more humiliating.

Spanking sometimes is used as a penalty if the child refuses to serve the time-out. However, spanking children is illegal in several countries, and other back-up penalties could be used, such as privilege withdrawal substantial enough to encourage serving time-outs instead.