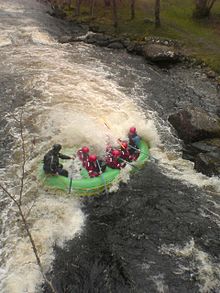 The International Scale of River Difficulty is a standardized scale used to rate the safety of a stretch of river, or a single (sometimes whitewater) rapid. The grade reflects the technical difficulty and skill level required associated with the section of river. The scale is of use to various water sports and activities, such as rafting, riverboarding, whitewater canoeing, and whitewater kayaking.

There are six levels each referred to as "Grade" or "Class" followed by a number. The scale is not linear, nor is it fixed. For instance, there can be hard grade twos, easy grade threes, and so on. The grade of a river may change with the level of flow. Often a river or rapid will be given a numerical grade, and then a plus (+) or minus (-) to indicate if it is in the higher or lower end of the difficulty level. Also note that while a river section may be given an overall grading, it may contain sections above that grade, often noted as features, or conversely, it may contain sections of lower graded water as well. Details of portages may be given if these pose specific challenges.

Classifications can vary enormously, depending on the skill level and experience of the paddlers who rated the river. For example, at the 1999 International Conference on Outdoor Recreation and Education, an author of a paddling guide pointed out that there is too much variation in what is covered by the class I designation, and proposed making further distinctions within the Class I flat water designations and Class I+ moving water designations, with the goal of providing better information for canoeists, instructors leading trips, and families with young children.[1]

The grade of a river or rapid is likely to change along with the level of the water. High water usually makes rapids more difficult and dangerous, although some rapids may be easier at high flows because features are covered or "washed-out". At spate/flood stage, even rapids which are usually easy can contain lethal and unpredictable hazards. Conversely, some rapids may be easier with lower water levels when dangerous hydraulics become easier to manage. Some rivers with high volumes of fast moving water may require little maneuvering, but will pose serious risk of injury or death in the event of a capsize.

Ratings can differ somewhat from country to country.

The specific grading system in Australia and New Zealand:[citation needed]

Grade I: Small regular waves. Easy passage, but care may be needed with obstacles.

Grade III: Fairly high waves, and the passage may be difficult to recognise from on the river.

Grade V: Extremely difficult. Very fast-flowing waters which can be maneuvered only by experts

Grade VI: For all practical purposes, unmanageable - even suicidal 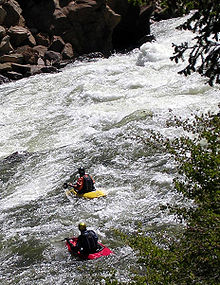 Grade I: Fast moving water with riffles and small waves. Few obstructions, all obvious and easily missed with little training. Risk to swimmers is slight; self-rescue is easy.

Grade II: Straightforward rapids with wide, clear channels which are evident without scouting. Occasional maneuvering may be required, but rocks and medium-sized waves are easily missed by trained paddlers. Swimmers are seldom injured and group assistance, while helpful, is seldom needed. Rapids that are at the upper end of this difficulty range are designated Class II+.

Grade III: Rapids with moderate, irregular waves which may be difficult to avoid and which can swamp an open canoe. Complex maneuvers in fast current and good boat control in tight passages or around ledges are often required; large waves or strainers may be present but are easily avoided. Strong eddies and powerful current effects can be found, particularly on large-volume rivers. scouting is advisable for inexperienced parties. Injuries while swimming are rare; self-rescue is usually easy but group assistance may be required to avoid long swims. Rapids that are at the lower or upper end of this difficulty range are designated Class III- or Class III+ respectively.

Grade IV: Intense, powerful but predictable rapids requiring precise boat handling in turbulent water. Depending on the character of the river, it may feature large, unavoidable waves and holes or constricted passages demanding fast maneuvers under pressure. A fast, reliable eddy turn may be needed to initiate maneuvers, scout rapids, or rest. Rapids may require “must” moves above dangerous hazards. Scouting may be necessary the first time down. Risk of injury to swimmers is moderate to high, and water conditions may make self-rescue difficult. Group assistance for rescue is often essential but requires practiced skills. A strong kayak roll is highly recommended. Rapids that are at the lower or upper end of this difficulty range are designated Class IV- or Class IV+ respectively.

Grade V: Extremely long, obstructed, or very violent rapids which expose a paddler to added risk. Drops may contain large, unavoidable waves and holes or steep, congested chutes with complex, demanding routes. Rapids may continue for long distances between pools, demanding a high level of fitness. What eddies exist may be small, turbulent, or difficult to reach. At the high end of the scale, several of these factors may be combined. Scouting is recommended but may be difficult. Swims are dangerous, and rescue is often difficult even for experts. A very reliable kayak roll, proper equipment, extensive experience, and practiced rescue skills are essential. Because of the large range of difficulty that exists beyond Class IV, Class 5 is an open-ended, multiple-level scale designated by class 5.0, 5.1, 5.2, etc... each of these levels is an order of magnitude more difficult than the last. Example: increasing difficulty from Class 5.0 to Class 5.1 is a similar order of magnitude as increasing from Class IV to Class 5.0.

Grade VI: These runs have almost never been attempted and often exemplify the extremes of difficulty, unpredictability and danger. The consequences of errors are very severe and rescue may be impossible. For teams of experts only, at favorable water levels, after close personal inspection and taking all precautions. After a Class VI rapids has been run many times, its rating may be changed to an appropriate Class 5.x rating.