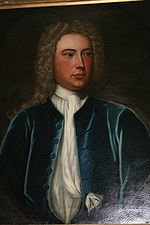 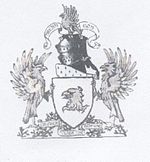 Munro of Foulis coat of arms

The chiefs of the Scottish highland Clan Munro, the Munros of Foulis, are according to tradition, descended from a Donald Munro of Foulis who died in 1039. However their descent can only be proved by contemporary evidence back to a Robert de Munro who died in 1369.[1]

According to 19th century historian Alexander Mackenzie, the chiefs of the Clan Munro are from as early as the 12th century designated Barons of Foulis.[2] However although the family line can be proved back to Robert de Munro (d.1369) by contemporary evidence, it cannot be proved that they were all actually Barons before they were made Baronets by Charles I in the 1630s. Strictly speaking Robert Mor Munro (d.1588) who Mackenzie designates the 15th Baron was the first true Baron although the Munro chiefs had previously held their lands from the Earl of Ross and directly from the crown for centuries before that.[3]

In 1848 Sir Hugh Munro, 8th Baronet of Foulis died leaving an only daughter. He was succeeded by his cousin Sir Charles Munro, 9th Baronet who was in fact the eldest male representative of the Munros of Culrain branch of the clan. The Munros of Culrain descend from George Munro, 1st of Newmore who was a son of Col. John Munro, 2nd of Obsdale, who was in turn a grandson of chief Robert Mor Munro, 15th Baron of Foulis (d.1588).[2] Some modern historians have claimed that the Munros of Culcairn, who are descended from George Munro, 1st of Culcairn, who was in turn a son of Sir Robert Munro, 5th Baronet (d.1729) should have become chiefs. It has been claimed, although not proven that because the Munro of Culcairn family was living in London, England, it was assumed that they had died out, even though they had not.[5][6]

In 1935 Chief Sir Hector Munro, 11th Baronet died and was succeeded to the chieftancy of the Clan Munro by his daughter, Eva Marion Munro. However the Baronetcy was succeeded to by Sir George Hamilton Munro, 12th Baronet, grandson Sir Charles Munro, 9th Baronet. Therefore the chieftanship of the Clan Munro and Baronetcy of Foulis became separated. See article: Munro Baronets.[7]