The President of Sierra Leone is constitutionally commander in chief of the military. The Sierra Leone Ministry of Defence and National Security is in charge of supervising the military. The department is headed by a minister of defence and national security, who is a civilian and a member of the president's Cabinet. The current defence minister is a retired Major General, Alfred Paolo Conteh.

The Military is led by the Chief of Defence Staff, who is in charge of supervising the military and is the highest ranking uniformed position in the country. The current chief of the defence staff is Robert Yira Koroma, who was appointed by president Ernest Bai Koroma in August 2010 to replace Major General Alfred Nelson Williams, who was placed on terminal leave.[5]

The Chief of the Defence Staff (CDS) is the professional head of the RSLAF. He is responsible for the administration and the operational control of the Sierra Leonean military. It is the highest rank military position in the country.

Brigadier David Lansana was appointed army commander of Sierra Leone in 1964.[6] Brigadier Lansana took control of the army from British colonial adviser, Brigadier R.D. Blackie when Lansana's close ally Prime Minister Albert Margai came to power. He came from the Mende tribe as did Margai and conflicts existed between northern tribes, the Krios and the Mendes.[6] In 1967 Margai, who promoted a one party (non-democratic) state was beaten in a general election. Lansana staged a brief coup, arresting Siaka Stevens, the democratic winner of the election and the army was purged of Northern and Krio officers.

In 1985, General Joseph Saidu Momoh, the army commander, succeed President Siaka Stevens. It is not clear what exactly Momoh's title was but it seems likely that he was the senior Sierra Leonean military officer and held the predecessor to the CDS's post.

Komba Mondeh served as CDS during the NPRC administration of 1992-1996.

Brigadier-General[7] Tom Carew was Chief of Defence Staff from April 2000 to November 2003. He may have been promoted to Major General during his tenure. 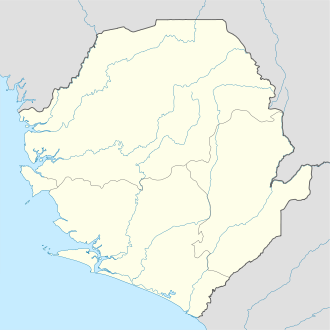 In 1991 the RUF began to make war against the government, and the army went on the offensive toward the end of the year along with troops from Guinea. In 1992 the army was expanded to 6,150 under President Momoh in a 'poorly designed strategy that eradicated the few remaining elements of cohesion in the military. ..recruits were mainly drifters, rural and urban unemployed, a fair number of hooligans, drug addicts, and thieves.'[9] A similar expansion effort after Strasser took over aimed to build the army to 14,000, using young criminals, school drop-outs, and semi-literate youths. 'In consequence the army became further fragmented, leading to the complete breakdown of command and control during the war, and again after the AFRC coup of 1997.'[10]

During the long Sierra Leone civil war which the government fought against the Revolutionary United Front from 1991–2002, the 1992 Sierra Leonean coup d'état brought the armed forces into power again. In 1997 the Armed Forces Revolutionary Council seized power. Over 15,000 perished during the war. After peace returned, the armed forces were slowly reduced in size, from around 13,500 personnel in 2007[11] to 8,500 in 2010. The British Armed Forces, in the shape of the roughly 100-strong International Military Assistance Training Team (IMATT), is assisting in the formation of the new armed forces.[12] IMATT is slated to down-size to 45-55 personnel by the end of 2010.

Today the army is by far the largest branch of the Republic of Sierra Leone Armed Forces, and is mainly responsible for protection of the state borders, the security of administered territories and defending the national interests of Sierra Leone within the framework of its international obligations. It had an active force of about 13,300 personnel circa 2007. There were plans to reduced strength to 8,500 by 2011. However the reduction in strength to 8,500 was achieved by the end of 2009.[2] The force consists of three brigades, 3 Brigade, in the past headquartered at Kenema, but as of 2011 seemingly at Murray Town Barracks, Freetown, which covers the Eastern Province (which probably includes 9th Battalion RSLAF at Simbakoro outside Koidu),[13] 4 Brigade, at Teko Barracks, Makeni, which covers the Northern Province (including 2nd Battalion RSLAF at Teko Barracks, Makeni, as of 2003)[14], and 5 Brigade, which covers the Southern Province from headquarters at Gondama Barracks, Bo.[15] As of 2002, about six IMATT advisors were deployed with each RSLAF brigade to assist with training, planning, personnel, and operations.[16]

As stability and peace continue to be consolidated in Sierra Leone, the RSLAF aimed to create a capability to contribute to wider and international peace support operations. Official websites said that 'To this end the RSLAF has targeted 2007 as the base year to initiate a Company for Peace Support Operations for ECOWAS, the AU and the UN. This would be gradually increased to a battalion strength by 2010. As a demonstration of this desire, a Peace Support Operations Course was introduced into the curriculum of the Horton Military Academy in Freetown. The course was intended to enhance capacity building, and to train and prepare officers of the RSLAF for their future role and participation in international peace support operations, and especially for the proposed ECOWAS Standby Force.'[3]

The hoped-for initial operational capability date for peacekeeping slipped until late 2009, when a Sierra Leonean reconnaissance company was deployed to Darfur as part of UNAMID.([1]) International donors and the Government of Sierra Leone provided the $6.5 million required to equip the unit and build the base camp in-theatre, some 2,300 kilometers inland from Port Sudan.[2] The contingent is under the command of Lieutenant Colonel S.E.T. Marah.

Despite the enormous resources invested by the UK into security sector reform in Sierra Leone, there are continuing financial pressures. Pay for soldiers is only GBP 45 plus some rice for a private per month, rising to GBP 350 for the Chief of Defence Staff. There are continued serious financial pressures on monthly running costs, with fuel, rations, stationery, and maintenance 'for both equipment and the estate' rarely funded.[2] Housing is generally of low quality. 'Operation Pebu' planned to build new barracks for the force, was badly planned and thus extremely over-ambitious. As a result, it was cut down to only two sites (Albrecht and Jackson 2009). In 2010 Robertshawe said that 'living accommodation for soldiers and their families is generally appalling with no running water or ablutions and often is a self-built shack or mud hut.'[2]

Sierra Leone has very limited modern weaponry. It should be noted though, that the country has a wide variety of used second-hand foreign imported arms. The IISS Military Balance 2009 lists 31 mortars, Carl Gustav recoilless rifles, and seven air defence guns in service.[17] Other army equipment may include the FN FAL (standard infantry rifle), the RPK/RPD standard infantry Support weapon, the L85 (only used by special forces), and the Type 69 RPG.

The SIPRI database states that Sierra Leone ordered 2 probably ex-Ukrainian T-72 tanks from Ukraine in 1994 which were delivered via Poland in 1995. The vehicles are described as to be operated by the South African company Executive Outcomes. Executive Outcomes has now withdrawn from Sierra Leone, and in 1999 was disestablished. Whether the two T-72s were actually delivered, or their final fate, remains unknown.

The RSLN was an arm of the Republic of Sierra Leone Armed Forces that is responsible sea patrol of Sierra Leone's Territorial waters. In 2002 it was merged with the other service branches. Today the naval force has about 500 personnel and operates several small patrol craft and barges. Their primary responsibility is to protect and safeguard the territorial integrity of Sierra Leone's sea. Sierra Leone naval officers are trained by British forces. They received financial support from Britain and China.

On September 25, 2007, eight Guineans Naval officers were arrested by the Sierra Leone Navy for an act of piracy against locally-licensed fishermen inside Sierra Leonean waters.[18] British-trained Sierra Leone naval officers interrupted the high-seas hold-up by armed men in two launches on Sunday, 18 nautical miles (33 km) off the capital Freetown inside the country's 200-mile (320-km) economic exclusion zone. One of the attacking speedboats escaped north towards Guinea, while the other was seized. The eight men arrested were found with AK-47 automatic rifles and bags of fish, including high-value snapper, taken off the Sierra Leone-licensed vessels.

After achieving independence from the UK in 1961, it wasn't until 1973 the air force was established with Swedish help in the form of two Saab MFI-15 two seat trainers.[19] Saab also supplied two model 300 (269C) light helicopters for additional training with Ghanaian help, plus anther was acquired as a presidential transport but was replaced in 1976 by a MBB BO 105. In 1978 both the helicopters and light trainers were sold and the air arm disappeared, the BO 105 was transferred to the civil register in 1985. In 1984 two Aerospatiale SA 355F Erureuil 2 helicopter entered service with the ministry of defence. Five mercenary operated Mil Mi-24V and two Mil Mi-8 helicopters entered service from 1995.

The Republic of Sierra Leone Air Force was merged with the other services to form the RSL Armed Forces from 2002. Sierra Leone has a very small air component with a limited offensive capability. The status of its equipment is unknown, but the aircraft are not operable.[20]

The RSLAF HIV/AIDS programme has been very proactive and successful in its campaign against the spread of HIV/AIDS within and among soldiers, their spouses and dependents, and the general public. At the height of the civil war there was an increase in the number of combatants admitted with HIV/AIDS related symptoms, like profuse diarrhoea, persistent fever, chest pains and tuberculosis. Since then a massive campaign launched has reduced the incidence of HIV/AIDS. Col Dr. J. Samba, is the current RSLAF HIV/AIDS coordinator.[citation needed]