The Chief of Defence Force (CDF; Chinese: 三军总长)[1] of Singapore is the head of the Singapore Armed Forces (SAF), who holds the rank of three-star general or admiral.[2] The position was created in 1974 as the Chief of General Staff with the appointment of Winston Choo, and re-titled to its current name in May 1990. Prior to the appointment of Choo as Chief of General Staff, the Ministry of Defence (and before that the Ministry of Interior and Defence) was in charge of the Singapore Armed Forces. Before the position was created, the head of Singapore's army—which at that time made up the military—held the position of director, general staff.

The President of Singapore has the power to appoint each new CDF (as well as new heads of each of the three services in the SAF) on the advice of the Prime Minister of Singapore, who in turn must consult with the Armed Forces Council,[3] on which the CDF sits. The CDF also maintains a role as an aide-de-camp to the President.

The position has been held by Lieutenant-General (LG) Neo Kian Hong, the seventh CDF, since 1 April 2010. Neo is the first CDF to be a qualified Ranger.[4]

The CDF is the operational head of the SAF,[5] and holds a seat on the Armed Forces Council which oversees all matters pertaining to the SAF.[6] In addition, if any of the three service chiefs – the Chief of Army, Navy or Air Force – is unable to carry out his duties, the CDF is tasked to perform those duties in addition to his own. If the CDF is unable to perform his own duties, the Minister of Defence is allowed to select one of the three service chiefs to perform the CDF's duties.[3]

The office of CDF also carries with it a position as one of three full-time aides-de-camp to the President. According to the Singapore Presidential Office website, the position entails handling the President's security and his social needs, in addition to other general duties.[7]

A number of powers relating to summary trials for military offences is vested in the CDF. Title 2, Section 62 of the Singapore Armed Forces Act states that any offence in which the accused holds the rank of Colonel or Military Expert 7 is to be referred to the CDF,[8] who can then dismiss the charge, hold a summary trial, or pass the case on to the director of legal services of the SAF,[9] who can in turn instruct the CDF to try the accused.[10]

As head of the SAF, the CDF often makes visits to countries with shared military interests, such as Bahrain,[11] Japan,[12] and Vietnam,[13] and also occasionally hosts foreign military chiefs on official visits.[14]

Leadership of the SAF before 1990

The role of the head of the SAF was titled director, general staff around 1969, and was held by Brigadier T.J. Campbell,[15] who had previously been head of the Singapore Defence Force and the Singapore Volunteer Corps before Singapore's independence.[16] Campbell had been acting director since some time in 1968.[17] Colonel Kirpa Ram Vij was appointed his successor.[18] According to sources, the position of director, general staff was considered "similar" to the position of the present-day CDF,[18] and was equivalent to the head of army.[19] A Straits Times report on Campbell's death refers to him as having been "army chief".[17]

In 1974, then-Colonel Winston Choo was given the appointment of chief of general staff, having previously been a departmental head at the Ministry of Defence. In May 1990 the position was re-titled to its current name, with Choo, now a Lieutenant-General, still in office. He had been promoted to each of the general ranks in 1974, 1978 and 1988.[20] Choo stepped down in 1992, after 18 years at the head of the SAF.[21]

Lee Kuan Yew, who was prime minister of Singapore in the 1970s, has described Goh Keng Swee as being the de facto armed forces chief of staff when the latter was Minister for Defence.[22] Dr Goh is considered to be the founder of the modern SAF, having been responsible for developing the SAF as defence minister from 1965–1967.[23][24]

Although Campbell and Vij have both held a position of similar authority, Choo is referred to as the first CDF in a number of MINDEF publications.[25][26]

In the past, there also existed a Deputy Chief of General Staff[27] who was tasked to "[work] with troops on the ground",[28] but there is no deputy position for the present-day Chief of Defence Force in the structure of the Singapore Armed Forces.[5]

Chiefs of Defence Force since 1990 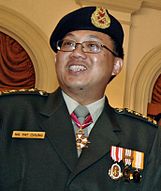 Since the appointment of CDF was established in 1990 there have been seven holders of the position, beginning with Winston Choo who was already in office as Chief of General Staff.

In their retirement citations from the Ministry of Defence, both Bey and Lim were cited for having "positioned the SAF to meet the challenges in the 21st century" and for improving the SAF's capacity to use latest technology in advancing the forces' proficiency;[32][33] Ng Yat Chung's retirement citation noted that he "successfully commanded the overall deployment of the SAF in peace support operations in East Timor" and disaster relief after both the 2004 Indian Ocean earthquake and tsunami and the May 2006 Java earthquake;[34] and Kuek was cited for "(leading) the SAF's transformation into a modernised, integrated and networked fighting force"[36] and "significantly (enhancing) the SAF's ability to deal effectively with the evolving security challenges".[35]