McDonald's original restaurant in San Bernardino, California served only hamburgers, milkshakes, and french fries. While still based on hamburgers, today's menu includes numerous other items that have been added through the years. Below are listed the basic items sold by the company.

All beef patties are grilled; seasonings consisting primarily of salt and black pepper.

The toy is usually a product tie-in with a movie or popular television show.

McDonald's introduced breakfast foods for the first time in 1972. 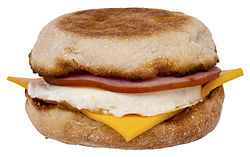