Chicken fried bacon consists of bacon strips dredged in batter and deep fried, like chicken fried steak. It is an American dish that was introduced in Texas in the early 1990s.[1] Frank Sodolak of Sodolak's Original Country Inn in Snook, Texas, is credited as having invented the food.[1]

Chicken fried bacon has been gaining in popularity[citation needed] as it is featured in popular YouTube videos, a book of Texas curiosities, and an increasing number of restaurant menus. It is usually served as an appetizer with a white "country" or cream gravy for dipping and sauce. 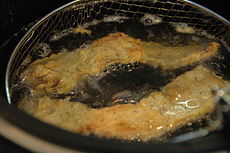 Sodolak's dish acquired enough of a reputation to be featured in Texas comedian John Kelso's Texas Curiosities. The entry states that "Things are not only bigger in Texas, they're greasier" and that "it's hard to imagine a more artery-clogging food."[2]

Sodolak serves six strips of bacon, battered and fried, with a bowl of cream gravy.[2] He and his restaurant[3] were featured on a Texas Country Reporter episode; the web video has been watched hundreds of thousands of times on YouTube.[4]

Chicken fried bacon made by Glen Kusak of south Texas won the Big Tex Choice Award for Best Taste in the 2008 State Fair of Texas in Dallas.[5][6] In recent years, the dish has made its way across America and it is served in Chicago at the Risque Cafe in Lake View.[7] The Risque Cafe's version of "country-fried bacon" is served with white gravy and sells for $6.[7] It is prepared using an egg wash, dredged in heavily peppered flour and deep fried in vegetable oil.[7] The café's chef, Andrew Niemeyer, said he "played around with the idea" while a student of the Cooking and Hospitality Institute of Chicago (he graduated in 2005) and did not mention that he was retracing ground pioneered years before in Texas.

Sodolak's YouTube video inspired others to copy the recipe, such as Don Yovicsin of Jake's Dixie Roadhouse, Waltham, Massachusetts. Alerted by a customer, he quickly made his own version, which he jokes is served "with a Lipitor I.V." and sells for $6.95 (Yovicsin serves only four strips of bacon).[8]

Since the dish is rich in saturated fat, those health experts that favor low-fat diets suggest consuming it in moderation or not at all.[9] Sally Squires of the Washington Post acknowledged chicken fried bacon's appeal to the palate, but suggests moderation.[9] Other experts note the dish's low nutritional benefits: "They've taken fat, they've double-coated it in fat, they've fried it in more fat, and then they've served it with a side order of fat."[2] Jane Hurley, senior nutritionist at the Center for Science in the Public Interest in Washington, D.C., stated she's "never heard of anything worse."[2]

While critics of the dish denounce its blatant negative health effects, lovers of the food speak as passionately about its qualities: