El Caracol, Chichen Itza
This article is about the pre-Columbian structure at Chichen Itza. For other uses, see El Caracol. 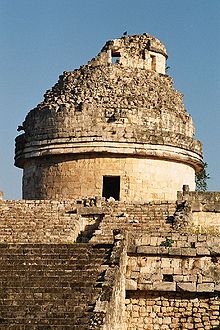 El Caracol, the Observatory, is a unique structure at pre-Columbian Maya civilization site of Chichen Itza. El Caracol, which means 'snail' in Spanish, is so named due to the spiral staircase inside the tower [1].

The structure is dated to around AD906, the Late Classic period of Mesoamerican chronology, by the stelae on the Upper Platform [2].

It is suggested that the El Caracol was an ancient Maya observatory building and served as a man-made marker, and provided a way for the Ancient Maya people to observe changes in the sky due to the flattened landscape of the Yucatán with no natural markers for this function around Chichen Itza[3].

The observers could view the sky above the vegetation on the Yucatán Peninsula without any obstruction.

Mayan astronomers knew from naked-eye observations that Venus appeared on the western and disappeared on the eastern horizons at different times in the year, and that it took 584 days to complete one cycle.[4]

They also knew that five of these Venus cycles equaled eight solar years.[5] Venus would therefore make an appearance at the northerly and southerly extremes at eight-year intervals.

Of 29 possible astronomical events (eclipses, equinoxes, solstices, etc) believed to be of interest to the Mesoamerican residents of Chichén Itzá, sight lines for 20 can be found in the structure. Since a portion of the tower resting on El Caracol has been lost, it is possible that the other measurements will never be ascertained to have been observed.[6]