The Purple Line, previously designated as the Bi-County Transitway, is a proposed 16-mile (25 km) transit line to link the Red, Green and Orange lines of the Washington Metro transportation system, in the Maryland suburbs of Washington, D.C.[2] The project is currently being administered by the Maryland Transit Administration (MTA). On October 7, 2011 the proposed light rail line received Federal Transit Administration approval to enter the detailed engineering phase which according to the Washington Post is "a significant step forward for in its decades-long trek toward construction."[3]

The Purple Line was conceived as a rail line from New Carrollton to Silver Spring. Maryland's Glendening administration (which included John Porcari as Secretary of Transportation) removed the heavy rail option from planning discussion because it was felt that the cost was greater than the need.

Both Governor Ehrlich and Secretary Flanagan introduced an alternative mode – bus rapid transit — that might be utilized in lieu of light rail transit. To reflect this possibility, the administration changed the name of the project to the "Bi-County Transitway" in March 2003. Another reason that "the Purple Line" was discouraged by the Ehrlich administration was that its associations with the other color-oriented names of the Washington Metro system (which consists of heavy rail) might lead the public to expect a heavy rail option. The new name did not catch on, however, as several media outlets and most citizens continued to refer to the project as the Purple Line. As a result, Governor Martin O'Malley and Secretary of Transportation John Porcari opted to revert to "Purple Line" in 2007.[2]

In January 2008, the O'Malley administration allocated $100 million within a six-year capital budget to complete design documents for state approval and funding of the Purple Line.[4] In May 2008, it was reported that the Purple Line could carry about 68,000 daily trips.[5]

A draft environmental impact study was issued on October 20, 2008.[6] On December 22, 2008, Montgomery County planners endorsed building a light rail line rather than a bus line. On January 15, 2009, the county planning board also endorsed the light rail option,[7] and County Executive Isiah Leggett has also expressed support.[8] On October 21, 2009, members of the National Capital Region Transportation Planning Board voted unanimously to approve the Purple Line light rail project for inclusion into the region’s Constrained Long-Range Transportation Plan.[9]

Even though the project is currently overseen by the Maryland Transit Administration (MTA), it is not yet clear who would operate the Purple Line if it were constructed. MTA representative Michael Madden said that the Washington Metropolitan Area Transit Authority (WMATA) has been working with the MTA to develop the Purple Line. The future transit system could be operated by the state of Maryland, by WMATA, or by Montgomery and Prince George's counties. Regardless, planners intend to utilize current Metrorail stations and for the Purple Line to accept WMATA's SmarTrip farecard.[10] Metro's 2008 annual report asks readers to imagine that in 2030 the Purple Line will be integrated with WMATA's existing transit system.[11][12] 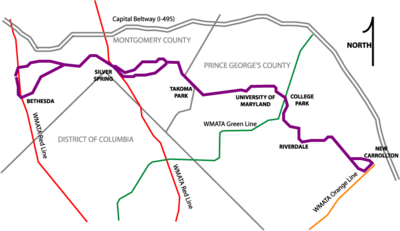 A map of the proposed Purple Line routes including alternative alignments

The planned rail or rapid bus line will connect the existing Metro, MARC commuter rail, and Amtrak stations at:[13]

The following stations are part of the "Locally Preferred Alternative" route approved by Governor Martin O'Malley on August 9, 2009:[14]

Although the majority of discussions about the Purple Line describe the project as a 16-mile east-west line between Bethesda and New Carrollton,[13] there have been several proposals to expand the line further into Maryland or to mirror the Capital Beltway as a loop around the entire Washington, D.C. metropolitan area. The Sierra Club has argued for a Purple Line which would "encircle Washington, D.C." and "connect existing suburban metro lines."[15] Maryland Lieutenant Governor Anthony G. Brown, while campaigning in 2006, similarly stated that he'd "like to see the Purple Line go from Bethesda to across the Woodrow Wilson Bridge," adding, "Let’s swing that boy all the way around" (a reference to having the Purple Line circle through Virginia and back to the line's point of origin in Bethesda).[16]

An advocacy group known as "The Inner Purple Line Campaign" has stated that the Purple Line could be extended westward to Tysons Corner and eastward to Largo, and that it could eventually cross the new Wilson Bridge from Suitland through Oxon Hill to Alexandria, eventually forming a rail line that encircles the city.[17] The reconstruction of the Woodrow Wilson Bridge (I-495's southern crossing over the Potomac River) provides capacity for the bridge to carry a heavy or light rail line.[18] Suggested stops along this proposed Purple Line expansion include:[19]

Responses for and against light rail

Common responses to opposition points, and responses in turn to them, include the following:
Pro-rail: