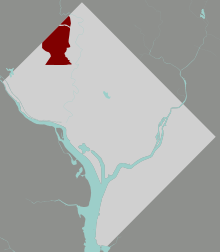 Map of Washington, D.C., with Chevy Chase highlighted in maroon

Chevy Chase is a neighborhood in northwest Washington, D.C. It borders Chevy Chase, Maryland, a collection of similarly affluent neighborhoods.

The neighborhood is generally agreed to be bounded by Rock Creek Park on the east, Western Avenue (which divides D.C. and Maryland) and Tennyson Street on the north, and Reno Road to the west. Opinions differ on the southern boundary, where Chevy Chase meets Forest Hills, but many residents consider it to be Broad Branch Road between 32nd and 27th streets. The main roads leading in and out of Chevy Chase, D.C. are Connecticut Avenue, Nebraska Avenue, Reno Road, Military Road and Western Avenue. The area is served by the M4, L1, L2, L4 E2, E3, E4 and E6 Metrobus lines. Chevy Chase is within walking distance of three Red Line stations: Van Ness-UDC, Tenleytown-AU, and Friendship Heights. The public schools that serve Chevy Chase are Lafayette Elementary, Ben W. Murch Elementary, Alice Deal Middle School, and Woodrow Wilson Senior High. 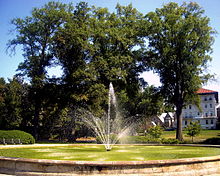 The Francis Griffith Newlands Memorial Fountain is located in the center of Chevy Chase Circle.

In the late 1880s, Senator Francis G. Newlands of Nevada and his partners began the aggressive acquisition of farmland in northwest Washington, D.C. and southern Montgomery County, Maryland, for the purpose of developing a residential streetcar suburb. (See Washington streetcars.) They founded the Chevy Chase Land Company in 1890, and its eventual holdings are now known as this neighborhood and Chevy Chase, Maryland. Chevy Chase DC was developed beginning in the early 1900s after construction was completed on the Chevy Chase Line, a streetcar line stretching to and beyond the northwestern boundary of the District of Columbia, thereby linking the area to downtown. Over succeeding decades the formerly remote area was transformed from farmland and woods to middle-class housing. The housing stock in Chevy Chase DC includes many "Sears Catalog Homes", a popular housing option in the early 20th century that allowed individuals of modest means to order by mail the materials and instructions for a home and build it themselves. 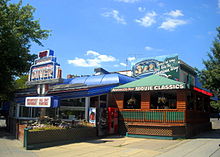 The neighborhood's major commercial road is Connecticut Avenue NW, which, in addition to commercial establishments, is home to apartments, a community center, and a regional branch of the D.C. Public Library. Unlike many urban neighborhoods that have lost local businesses to large chains and suburban malls, the small, generally locally owned businesses along Connecticut Avenue remain, and are well-patronized by the local population. These businesses include Magruder's Supermarket, established in 1875, and the Avalon Theatre, which opened in 1923 as a silent film house and ran until the theater underwent renovations in 2003. The Avalon thereafter reopened as a non-profit theater. In addition to historical commercial buildings the area has multiple parks including Rock Creek Park, Lafayette Park and Livingston Park.

Prior to 2002, the entire neighborhood was located in Ward 3.[1] Because the 2000 census revealed an increase in population in Ward 3 and a decrease in population in Ward 4, the Council of the District of Columbia voted to reassign the portion of the neighborhood east of Broad Branch Road to Ward 4 as of January 1, 2002.[2] Many residents were quite upset at the decision.[1] The Chevy Chase Civic Association filed suit to prevent the redistricting on the grounds that it would reduce African American voting strength in Ward 3 and would result in unconstitutional and racially motivated gerrymandering.[2] The U.S. District Court for the District of Columbia upheld the redistricting, as did the U.S. Court of Appeals.[2] Following the redistricting, the neighborhood's Advisory Neighborhood Commission was called 3/4G.[1]