This article concerns the physical phenomenon of synchrotron radiation. For details on the production of this radiation and applications in laboratories, see Synchrotron light source.

The electromagnetic radiation emitted when charged particles are accelerated radially (

) is called synchrotron radiation. It is produced in synchrotrons using bending magnets, undulators and/or wigglers. It is similar to cyclotron radiation except that is generated by the acceleration of ultrarelativistic (moving near the speed of light) charged particles through magnetic fields. This may be achieved artificially in synchrotron or storage rings, or naturally by fast electrons moving through magnetic fields in space. The radiation produced in this way has a characteristic polarization and can range over the entire electromagnetic spectrum.

Synchrotron radiation from a bending magnet

Synchrotron radiation from an undulator

General Electric synchrotron accelerator built in 1946, the origin of the discovery of synchrotron radiation. The arrow indicates the evidence of radiation.

Synchrotron radiation was named after its discovery in a General Electric synchrotron accelerator built in 1946 and announced in May 1947 by Frank Elder, Anatole Gurewitsch, Robert Langmuir, and Herb Pollock in a letter entitled "Radiation from Electrons in a Synchrotron".[1] Pollock recounts:

"On April 24, Langmuir and I were running the machine and as usual were trying to push the electron gun and its associated pulse transformer to the limit. Some intermittent sparking had occurred and we asked the technician to observe with a mirror around the protective concrete wall. He immediately signaled to turn off the synchrotron as "he saw an arc in the tube." The vacuum was still excellent, so Langmuir and I came to the end of the wall and observed. At first we thought it might be due to Cherenkov radiation, but it soon became clearer that we were seeing Ivanenko and Pomeranchuk radiation."[2]

When high-energy particles are in rapid motion, including electrons forced to travel in a curved path by a magnetic field, synchrotron radiation is produced. This is similar to a radio antenna, but with the difference that, in theory, the relativistic speed will change the observed frequency due to the Doppler effect by the Lorentz factor, γ. Relativistic time contraction then bumps the frequency observed in the lab by another factor of γ, thus multiplying the GHz frequency of the resonant cavity that accelerates the electrons into the X-ray range. The radiated power is given by the relativistic Larmor formula while the force on the emitting electron is given by the Abraham-Lorentz-Dirac force. The radiation pattern can be distorted from an isotropic dipole pattern into an extremely forward-pointing cone of radiation. Synchrotron radiation is the brightest artificial source of X-rays. The planar acceleration geometry appears to make the radiation linearly polarized when observed in the orbital plane, and circularly polarized when observed at a small angle to that plane. Amplitude and frequency are however focussed to the polar ecliptic.

In equation (1), and (2), the first terms fall off as the inverse square of the distance from the particle, and this first term is called the generalized Coulomb field or velocity field. And the second terms fall off as the inverse first power of the distance from the source, and it is called the radiation field or acceleration field. If we ignore the velocity field, the radial component of Poynting's Vector resulted from the Liénard–Wiechert field can be calculated to be

Integrating Eq. (4) over the all solid angles, we got relativistic generalization of Larmor's formula

However, this also can be derived by relativistic transformation of the 4-acceleration in Larmor's formula.

When the charge is in instantaneous circular motion with its acceleration

perpendicular to its velocity

. Choosing a coordinate system such that instantaneously

is in the z direction and

is in the x direction. With the customary polar angles

defining the direction of observation, the general formula Eq. (4) reduces to

In the relativistic limit (γ > > 1), the angular distribution can be written approximately

When the electron velocity approaches the speed of light, the emission pattern is sharply collimated forward.

Using the Fourier Transformation we move to the frequency space

Therefore, if we know the particle's motion, cross products term, and phase factor, we could calculate the radiation integral. However, calculations are generally quite lengthy (even for simple cases as for the radiation emitted by an electron in a bending magnet, they require Airy function or the modified Bessel functions). 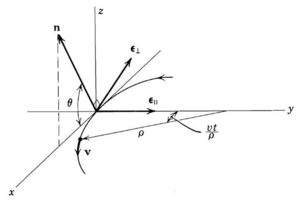 Trajectory of the arc of circumference

Trajectory of the arc of circumference is

In the limit of small angles we compute

Substituting into the radiation integral and introducing

,where the function K is modified Bessel function. 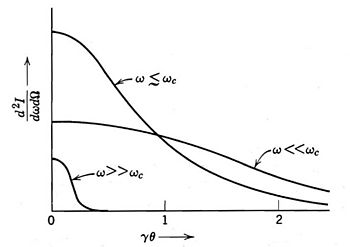 From the Eq.(10), we observe that the radiation intensity is negligible for

. Critical frequency is defined as the frequency when

,and critical angle is defined as

Integrating on all angles, we get the frequency distribution of the energy radiated. 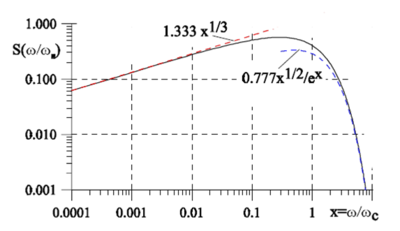 Formula for spectral distribution of synchrotron radiation, given above, can be expressed in terms of rapidly coverged integral with no special functions involved [3] (see also modified Bessel functions ) by means of the relation:

Synchrotron radiation emission as a function of the beam energy 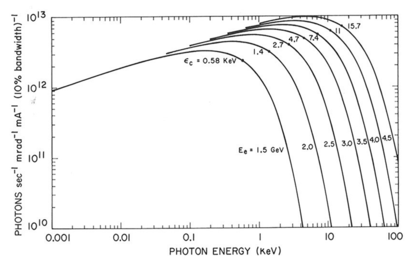 Relationship between power radiated and the photon energy

Then, the relationship between radiated power and photon energy is shown in the graph on the rightside. The higher the critical energy, the more photons wih high energies are generated. Note that, there is no dependence on the energy at longer wavelength.

is the radiation power with polarization in the orbit plane, and the second term

Integrating on all the angles, we find that seven times as much energy is radiated with parallel polarization as with perpendicular polarization. The radiation from a relativistically moving charge is very strongly, but not completely, polarized in the plane of motin.

Solution of equation of motion and undulator equation

Undulator is consist of periodic array of magnets, so that they provide a sinusoidal magnetic field.

Solution of equation of motion is

,and the parameter K is called the undulator parameter.

Constructive interference of the beam in the undulator

This equation is called the undulator equation.

Radiation from the undulator

Using the periodicity of the trajectory, we can split the radiation integral into a sum over Nu terms. 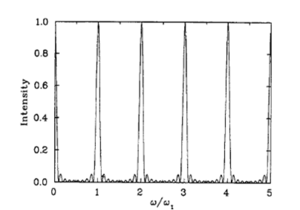 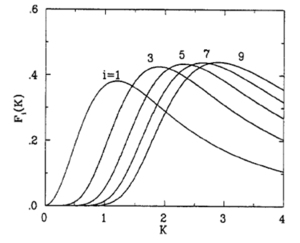 Only odd harmonics are radiated on-axis 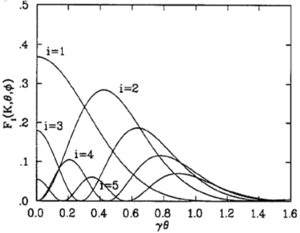 The radiation integral in an undulator can be written as

,and Fn depends on the angles of observations and K

Note that only odd harmonics are radiated on-axis, and as K increases higher harmonic becomes stronger.

Synchrotron radiation may occur in accelerators either as a nuisance, causing undesired energy loss in particle physics contexts, or as a deliberately produced radiation source for numerous laboratory applications. Electrons are accelerated to high speeds in several stages to achieve a final energy that is typically in the GeV range. In the LHC proton bunches also produce the radiation at increasing amplitude and frequency as they accelerate with respect to the vacuum field, propagating photoelectrons, which in turn propagate secondary electrons from the pipe walls with increasing frequency and density up to 7x1010. Each proton may lose 6.7keV per turn due to this phenomenon.[4] 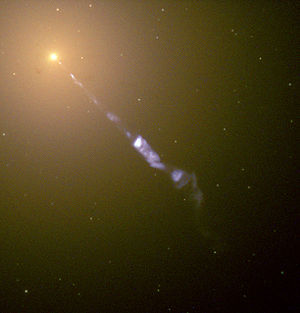 M87's Energetic Jet, HST image. The blue light from the jet emerging from the bright AGN core, towards the lower right, is due to synchrotron radiation.

Synchrotron radiation is also generated by astronomical objects, typically where relativistic electrons spiral (and hence change velocity) through magnetic fields. Two of its characteristics include non-thermal power-law spectra, and polarization.[5]

It was first detected in a jet emitted by M87 in 1956 by Geoffrey R. Burbidge,[6] who saw it as confirmation of a prediction by Iosif S. Shklovsky in 1953, but it had been predicted several years earlier by Hannes Alfvén and Nicolai Herlofson [7] in 1950.

T. K. Breus noted that questions of priority on the history of astrophysical synchrotron radiation is quite complicated, writing:

"In particular, the Russian physicist V.L. Ginzburg broke his relationships with I.S. Shklovsky and did not speak with him for 18 years. In the West, Thomas Gold and Sir Fred Hoyle were in dispute with H. Alfven and N. Herlofson, while K.O. Kiepenheuer and G. Hutchinson were ignored by them."[8]

Supermassive black holes have been suggested for producing synchrotron radiation, by ejection of jets produced by gravitationally accelerating ions through the super contorted 'tubular' polar areas of magnetic fields. Such jets, the nearest being in Messier 87, have been confirmed by the Hubble telescope as apparently superluminal, travelling at 6×c (six times the speed of light) from our planetary frame. A number of inconsistent solutions have been offered but it is suggested by both the DFM (Discrete Field Model) and 'Einstein Aether theory' to be the columnar effect of charged particles following and travelling within previous 'tubes' of particles, all travelling at 'c' locally with respect to the previous particles. The observations are of change of position, with light from the observations arriving at 'c', so the second postulate of SR (invariance of speed of light) would not be violated.

A class of astronomical sources where synchrotron emission is important is the pulsar wind nebulae, or plerions, of which the Crab nebula and its associated pulsar are archetypal. Pulsed emission gamma-ray radiation from the Crab has recently been observed up to ≥25 GeV,[9] probably due to synchrotron emission by electrons trapped in the strong magnetic field around the pulsar. Polarization in the Crab[10] at energies from 0.1 to 1.0 MeV illustrates a typical synchrotron radiation.