The Chestnut Street Theatre in Philadelphia, Pennsylvania was the first theater in the United States built by entrepreneurs solely as a venue for paying audiences.[1] 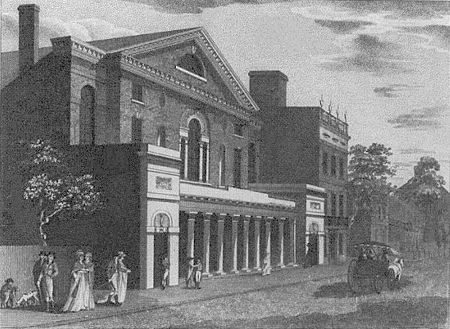 The Chestnut Street Theatre (originally named the New Theatre) was the brainchild of Thomas Wignell and Alexander Reinagle who in 1791 convinced a group of Philadelphia investors to build a theater suitable for Wignell’s company to perform in. Wignell had not yet formed his company when the New Theatre was being set up to be built, but as the New Theater was being built, Wignell was in England recruiting actors to be a part of his company.[2] The New Theater's design, modeled after the Theatre Royal, Bath, was made possible by John Inigo Richards, Wignell's brother-in-law, who obtained architect Thomas Greenway’s original plans.[3] The New Theatre was built on Chestnut Street near the corner of Sixth Street across from Congress Hall. $30,000 was raised for the construction of the building and the finale touches were not completed until 1805 under architect Benjamin Henry Latrobe.[4] The stage ran with a depth of seventy-one feet and had a width of thirty feet. The three tiers of boxes could hold nine hundred people; the theatre itself was able to hold an audience of two thousand. There were multiple dressing rooms, two green rooms, and for the first time in America a large well-stocked wardrobe. There were two different entrances from the street for the theatre patrons, those going to the pit and those headed to the boxes. The entryway to the pit was only eighteen inches wide, a death trap in the event of a fire. Like English theatres the New Theatre on Chestnut Street had all the essentials. A proscenium with proscenium doors in the proscenium walls with a balcony overhead.[5] Not long after its construction the New Theatre was often referred to as one of the Seven Wonders of America. [6] A yellow fever epidemic spoiled the theater’s debut in 1793, and its first regular season did not begin until the following year when the inaugural night’s entertainment offered a double feature, John O'Keeffe's Castle of Andalusia and Hannah Cowley's Who's the Dupe?[3] Over the following twenty-seven years the theater would become a showcase for works by local and national dramatist of the day. In 1816 the New Theatre became the first American theater to be illuminated by gas fixtures rather than candlelight or oil lamps. Four years later a suspicious fire destroyed the theater along with its library, music, scenery and costumes. The cause of the fire remained a mystery since the building had been vacant for several days while the company was engaged in Baltimore. [7] 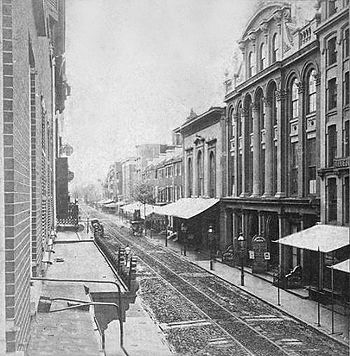 Two years later the Chestnut Street Theatre rose from the ashes of the first. It was built in the customary design of the day with triple tiers boxes making a horseshoe around the stage that accommodated approximately two thousand theatergoers. The façade was made of Italian style marble with an arcade supported by a row of composite columns with a plain entablature. The entrance stood between two wings that held niches containing statues of Tragedy and Comedy sculpted by William Rush. Below the statues were semi-circular recesses containing basso relievos of tragic and comic muses.[8][9] The Chestnut Street Theatre was once again consumed in a fire in 1856 and would not see another curtain rise for six years. [3]

The third Chestnut Street Theatre was built in 1862, some seven blocks to the west of its original location, where once again it found favor with Philadelphia audiences as a fashionable night spot and remained open over the following fifty years. The Chestnut Street Theatre closed its doors for the last time in 1913 after the curtain fell on the finale act of Sir Arthur Wing Pinero's The Second Mrs. Tanqueray. Not long afterwards the old building was demolished.[3]>[10]