In medicine, a chest radiograph, commonly called a chest X-ray (CXR), is a projection radiograph of the chest used to diagnose conditions affecting the chest, its contents, and nearby structures. Chest radiographs are among the most common films taken, being diagnostic of many conditions.

For some conditions of the chest, radiography is good for screening but poor for diagnosis. When a condition is suspected based on chest radiography, additional imaging of the chest can be obtained to definitively diagnose the condition or to provide evidence in favor of the diagnosis suggested by initial chest radiography. Unless a fractured rib is suspected of being displaced, and therefore likely to cause damage to the lungs and other tissue structures, x-ray of the chest is not necessary as it will not alter patient management.

The main regions where a chest X-ray may identify problems may be summarized as ABCDEF by their first letters:[3] 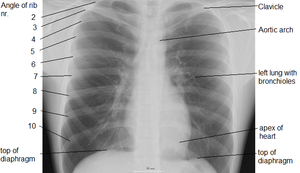 A chest radiograph with the angle parts of the ribs and some other landmarks labeled.

Different views of the chest can be obtained by changing the relative orientation of the body and the direction of the x-ray beams. The most common views are posteroanterior, anteroposterior, and lateral. In an posteroanterior (PA) view, the x-ray source is positioned so that x-rays enter through the posterior (back) aspect of the chest, and exit out of the anterior (front) aspect where they are detected. To obtain this view, individuals stand facing a flat surface behind which is an x-ray detector. A radiation source is positioned behind the patient at a standard distance, and x-ray beams are transmitted toward the patient.

In anteroposterior (AP) views, the positions of the x-ray source and detector are reversed: x-rays enter through the anterior aspect and exit through the posterior aspect of the chest. AP chest x-rays are harder to interpret than PA x-rays and are therefore generally reserved for situations where it is difficult for the patient to obtain a normal chest x-ray, such as when the patient cannot get out of bed. In this situation, mobile X-ray equipment is used to obtain a lying down chest x-ray (known as a "supine film"). As a result most supine films are also AP.

Lateral views of the chest are obtained in a similar fashion as the posteroanterior views, except in the lateral view, the patient stands with both arms raised and the left side of the chest pressed against a flat surface.

In the United States, initial imaging of the chest generally consists of PA and lateral views. In other countries, the PA view suffices as an initial study; the lateral view is only added if indicated from interpretation of the PA view.

A nodule is a discrete opacity in the lung which may be caused by:

There are a number of features that are helpful in suggesting the diagnosis:

If the nodules are multiple, the differential is then smaller:

A cavity is a walled hollow structure within the lungs. Diagnosis is aided by noting:

Fluid in space between the lung and the chest wall is termed a pleural effusion. There needs to be at least 75ml of pleural fluid in order to blunt the costophrenic angle on the lateral chest radiograph, and 200ml on the posteroanterior chest radiograph. On a lateral decubitus, amounts as small as 5ml of fluid are possible. Pleural effusions typically have a meniscus visible on an erect chest radiograph, but loculated effusions (as occur with an empyema) may have a lenticular shape (the fluid making an obtuse angle with the chest wall).

Pleural thickening may cause blunting of the costophrenic angle, but is distinguished from pleural fluid by the fact that it occurs as a linear shadow ascending vertically and clinging to the ribs.

The differential for diffuse shadowing is very broad and can defeat even the most experienced radiologist. It is seldom possible to reach a diagnosis on the basis of the chest radiograph alone: high-resolution CT of the chest is usually required and sometimes a lung biopsy. The following features should be noted:

Pleural effusions may occur with cancer, sarcoid, connective tissue diseases and lymphangioleiomyomatosis. The presence of a pleural effusion argues against pneumocystis pneumonia.

Reticular (linear) pattern
(sometimes called "reticulonodular" because of the appearance of nodules at the intersection of the lines, even though there are no true nodules present)