Echinochloa crus-galli is a type of wild grass originating from tropical Asia that was formerly classified as a type of panicum grass. It is commonly known as Cockspur (or Cockspur Grass), Common Barnyard Grass, or simply "barnyard grass" (which may refer to any species of Echinochloa or the genus as a whole however). This plant can grow to 60" (1.5 m) in height and has long, flat leaves which are often purplish at the base. Most stems are upright, but some will spread out over the ground. Stems are flattened at the base. The seed heads are a distinctive feature, often purplish, with large millet-like seeds in crowded spikelets.

Considered one of the world's worst weeds, it reduces crop yields and causes forage crops to fail by removing up to 80% of the available soil nitrogen. The high levels of nitrates it accumulates can poison livestock. It acts as a host for several mosaic virus diseases. Heavy infestations can interfere with mechanical harvesting.

Individual plants can produce up to 40,000 seeds per year. Water, birds, insects, machinery, and animal feet disperse it, but contaminated seed is probably the most common dispersal method.

Aug.-Oct.; seed maturing Sept.-Oct., up to 40,000/plant. Var. crusgalli has long, somewhat spreading papillose cilia at the summits of the internodes and bases of the branches in the inflorescence and short, very thick papillose cilia along the lateral nerves of the 2nd glume, sterile lemma, and somewhat spreading spikes", and sterile lemmas with awns 0–10 mm long.[1]

Barnyard grass commonly occurs throughout tropical Asia and Africa in fields and along roadsides, ditches, along railway lines, and in disturbed areas such as gravel pits and dumps. It also invades riverbanks and the shores of lakes and ponds. It occurs in all agricultural regions. This species is considered an invasive species in North America where it occurs throughout the continental United States. It is also found in southern Canada from British Columbia east to Newfoundland.[2] It was first spotted in the Great Lakes region in 1843.[3]

Ranging from Boreal Moist to Wet through Tropical Very Dry to Moist forest life zones. Adapted to nearly all types of wet places, this grass is often a common weed in paddy fields, roadsides, cultivated areas, and fallow fields. It grows on variety of wet sites such as ditches, low areas in fertile croplands and wet wastes, often growing in water. Succeeds in cool regions, but better adapted to areas where average annual temperature is 14-16°C. Not restricted by soil pH.

A warm-season grass used as cattle fodder and is sometimes cultivated for this purpose. It is also suited for silage, but not for hay. It is fed green to animals and provides fodder throughout the year; hay made from this plant can be kept up to 6 years. This grass is also used for reclamation of saline and alkaline areas, especially in Egypt.

The grain of some varieties is eaten by humans in times of scarcity and sometimes used for adulterating fennel.[4] The roots are boiled to cure indigestion in the Philippines. The young shoots are eaten as a vegetable. The plant extract is used in diseases of the spleen. Young shoots are eaten as a vegetable in Java. Reported to be preventative and tonic, barnyard grass is a folk remedy in India for carbuncles, haemorrhages, sores, spleen trouble, cancer and wounds.

In the Hisar district of the Indian state of Haryana the seeds Of this grass are commonly eaten with cultivated rice grains to make rice pudding or khir on Hindu fast-days.

Japanese barnyard millet (Echinochloa esculenta), a domesticated form of E. crus-galli, is cultivated on a small scale in Japan, Korea and China.

This grass is subject to brown spot, a fungal infection caused by Bipolaris oryzae . 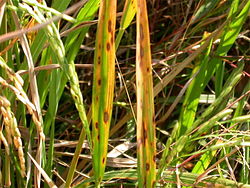 The following Punjabi dialect forms are recorded in Punjab for this grass: