Chemrec (English /ˈkɛmrɛk/) is a Stockholm, Sweden corporation that develops technology for entrained flow gasification of black liquor and certain types brown liquor for production of biofuels from the resulting syngas.

Chemrec has for three consecutive years been ranked as one of the top 100 global greentech companies by the Cleantech Group and AlwaysOn (see Awards).

Installation of the BioDME synthesis towers at Chemrec's pilot facility in Piteå, Sweden, on May 23, 2010

Chemrec's technology originated in the mid-80's with an invention by Jan-Erik Kignell who was awarded the Royal Swedish Academy of Engineering Sciences' Gold Medal for this feat in 1993.[7] Kignell sold his black liquor gasification patent to the Swedish ball bearing company SKF that worked on gasification in the late 1980s, but concluded that the technology related to black liquor was too far removed from the company's core business, upon which the inventors Nils Bernhard and Lars Stigsson acquired the patents in 1989 and founded Chemrec (an abbreviation of CHEMical RECovery) to exploit the technology.

In 1990 Kvaerner bought Chemrec and remained the sole owner until 2000. When Kvaerner experienced financial difficulties and divested several non-core businesses in 2000 Babcock Borsig acquired a majority position in Chemrec. Babcock Borsig filed for bankruptcy in 2002 and Nykomb Synergetics, at the time a minority owner, acquired Chemrec from the bankruptcy estate. In 2003-2006 Nykomb Synergetics was the sole owner, and still holds a minority position after bringing in additional venture capital from 2006 onwards.

During the period from 1990 Chemrec developed a series of pilot plants for first generation atmospheric air-blown gasifiers. In 1996 the first full-scale commercial gasifier with this technology was delivered to Weyerhaeuser's New Bern plant in a collaboration between Chemrec and the U.S. DOE Energy Efficiency and Renewable Energy division.[8][9] Concurrently Chemrec initiated development of second generation pressurized oxygen-blown technology based on operating experience and new patents. A pilot plant using this technology is today in continuous use adjacent to Smurfit Kappa's plant in Piteå, Sweden.

Within the "BioDME" project, supported by the European Commission's Seventh Framework Programme (FP7) and the Swedish Energy Agency, Chemrec is building the world's first pilot plant for synthesis of BioDME adjacent to the existing gasification pilot plant in Piteå, with production start early in 2010.[10]

In 2009 the Swedish Energy Agency awarded Chemrec a grant of SEK 500 million towards the construction of a SEK 3 billion industrial scale experimental development biofuels plant at the Domsjö Fabriker biorefinery complex in Örnsköldsvik, Sweden. The grant was approved by EU's Directorate-General for Competition on January 26, 2011, following assessment of the project under the EU framework for State aid for research and development and innovation.[5] 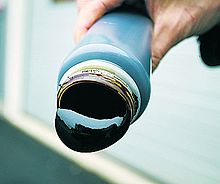 Black liquor is a biomass feedstock with unique properties.

First of all, it is available at existing industrial sites in large quantities.[11]

Secondly it is a liquid. This makes it possible to easily feed it by pumping into the pressurized gasifier. With biomass in solid or pulverized form this becomes significantly more difficult. The liquid state also makes the black liquor easy to atomize into a fine mist that reacts very fast in the gasifier.[citation needed]

Thirdly, the gasification of black liquor char is more rapid than for any other feedstock as the inherently high sodium and potassium content of black liquor acts as a catalyst.[11]

These properties makes it possible to apply the high temperature, entrained flow gasification principle to black liquor. This type of gasification process provides many advantages over alternative gasification technologies:[citation needed]

For all practical purposes sodium-based sulfite liquor, the sulfite process equivalent of black liquor, is equally or even better suited for gasification.[citation needed]

Black liquor gasification fulfills two investment-intensive duties with a single process; it provides the pulp mill with needed black liquor recovery capacity at the same time as it produces syngas for biofuels production. In this way the total investment demand decreases.[12]

The Chemrec gasification process also has a substantially higher thermal efficiency than the process it replaces - the Tomlinson recovery boiler.[13]

The 300 tons/day atmospheric air-blown unit increases pulp production through improved black liquor recovery capacity and flexibility in chemical recovery. The A300 Booster is installed in parallel with the mill’s existing recovery boiler. A significant benefit of this system is that it can be installed while the recovery boiler continues to operate, thus avoiding down time and lost production.[14]

The OX300 atmospheric oxygen-blown Booster not only increases the black liquor recovery capacity but also produces a fuel gas suitable as lime kiln fuel. In this way lime kiln fuel costs and the mill carbon footprint can be significantly reduced.[14]