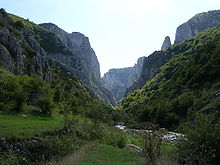 Cheile Turzii (Turda Gorges in English) is a natural reserve (on Hășdate River) situated 6 km west of Turda and about 15 km south-east of Cluj-Napoca, in Transylvania, Romania.

The canyon, formed through the erosion of the jurasic calcar of the mountain, is 2 900 m long[1] and the walls have hights reaching 300 m[1]. The total surface of the canyon is of 324 ha.

Cheile Turzii contain one of the richest and most scenary karst landscapes in Romania. More than 1000 plant and animal species (some of them rare or endangered, like the wild garlic or some species of eagle) live here.

The site has been inhabited since the neolithic.

More than 1,000 plant species can be found in the reservation.

There are some 60 known caves, almost all of them being of small size (the longest one has 120 m).

Cheile Turzii are just a few km away from two other canyons (Cheile Turului and Cheile Borzești) as well as from Ciucaș waterfall.

Cheile Turzii is one of the main rock climbing sites in Romania.