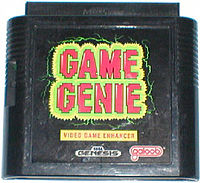 A cheat cartridge is a device that connects to any sort of cartridge-based video game system. It allows a user to input special cheat codes to manipulate a game in a way not permitted by its original programming. Usually the effect is to gain infinite lives, ammunition, unlock secrets, or do things that would otherwise allow an unfair advantage (or disadvantage in some cases). Some games even have codes to activate unreleased levels, weapons, or items that may not have been available normally, and some even have codes to access debug menus used by programmers. Equivalent non-cartridge devices have been released and sold for modern game systems that use optical media instead of cartridges to store games.

A cheat cartridge's operation is simple. The device connects to the same port as normal game cartridges, thus allowing it to be plugged into the console's game slot. The game to be cheated is then attached to the device itself using another identical port.

When powered on, the console will run the software stored on the cheat device. This is usually a menu from which the correct game is selected, and various cheats toggled on or off. When the user is ready, the device then runs the actual game. However, the activated cheats modify values in the game's code as it passes through the device, producing the desired effects, such as infinite lives and ammunition.

Publishers of some video game consoles, such as Nintendo actively attempted to thwart such devices, both through legal action and hardware or software alterations in the platform. Others were indifferent to the existence of such devices, or in the case of the Sega Genesis console, actually embraced their development.