Cheadle and Marple Sixth Form College, or CAMSFC, is a sixth form college in Stockport.

It has two campuses:

The college offers a very wide range of courses, including GCSEs, AS and A Levels, International Baccalaureate, vocational NVQs and BTECs, and Access courses for adults. 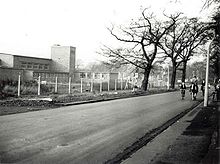 The newly built Cheadle County Grammar School for Girls in 1956

In 1946, following the Education Act 1944, a building known as Moseley Hall on Wilmslow Road was acquired by the local authority for £6,500. Moseley Hall had been owned by John Henry Davies, President of Manchester United Football Club, since 1904. His widow, who lived at Bramall Hall till 1935, re-purchased Moseley Hall at some point after his death in 1927. During the war the building was used for four years as the National Fire Service headquarters for Manchester. It was converted into a grammar school, which took its name from the building it occupied. It was run by the Cheadle and Wilmslow Educational Executive of Cheshire Education Committee. It was situated north-west down the road (A5149) from the current campus, and bordered neighbouring Cheadle. It was originally co-educational. The first headmaster was Wilfred Simms, aged 34.

In January 1956 a new school was built where the current Cheadle campus is today and this became Cheadle County Grammar School for Girls. Moseley Hall therefore became a boys-only school. The girls' school had around 950 girls and was situated on Cheadle Road (A5149).

In 1970, a new school was built adjacent to the girls' school on North Downs Road. It cost £370,000, and became known as Cheadle Moseley Boys' Grammar School[1] with 900 boys. The two schools, whilst next to each other, remained separate, despite plans to merge them.[2][3] Moseley Hall was eventually demolished in the late 1970s and replaced by the Village Hotel and an entertainment complex[4]. The boys' school at one time had its own railway line[5].

The schools were eventually merged and became known as The Manor County Secondary School, a comprehensive school. It was the first state comprehensive to take the International Baccalaureate in 1990.

In 1991 it was converted into a college of further education; the girls' school became known as the Bulkley Building, and the boys' school became the Moseley Building. Initially the college was called Margaret Danyers College on North Downs Road. In the early 1990s, Stockport replaced its school sixth forms with separate sixth form colleges. Margaret Danyers started at the age of 14 and was effectively an upper school, not just a sixth form college. The Cheadle Adult Centre was next door.

The Marple Campus was initially called Marple Ridge College. In 1995 Margaret Danyers College and Marple Ridge College combined to become Ridge Danyers College with two campuses.[6] There were some problems with the Cheadle Campus as part of the Moseley building was declared unsafe in the early 1990s due to the decay of the reinforced concrete with which it was constructed. This building was eventually demolished in August 2000, and replaced by a new building.

In October 2004 the college changed its name to CAMSFC (Cheadle and Marple Sixth Form College).[7] It was the largest further education college in the country in 2004, with around 9001 students.[8]. In 2011, the college commenced a consolidation of the two sites in Marple, entering into talks with supermarkets, aiming to sell the Hibbert Lane campus, leaving just the Buxton Lane campus in use.[9]