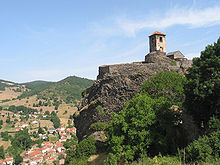 The Château de Saint-Ilpize is a ruined castle in the commune of Saint-Ilpize in the Haute-Loire département of France. The medieval town of Saint-Ilpize clings to a basalt rock on which stands the castle. Within the castle's walls is a 14th century chapel built of polychromatic tufa; a basalt gable wall houses the church bells[1].

In the Middle Ages the castle was an important châtelain, Saint-Ilpize being one of the treize bonnes villes d'Auvergne (thirteen good towns of Auvergne) which had supported Charles VII during the Praguerie revolt of 1440.

In 1424, Blanche Dauphine, inheritor of the manor, married Jean de Lespinasse. In 1480, the property passed to the house of Amboise, and, in the 16th century, to the house of Rochefoucauld-Langeac.

The castle and the chapel have been listed since 1907 as a monument historique by the French Ministry of Culture[3].

The curtain walls are dominated by the former chapel and a square tower which now serves as a bell tower. Successive enceintes, flanked with towers, surrounded the lower court yards and sections of the town which, by the 16th century, extended as far as the banks of the Allier. Only the uppermost enceinte, which protected the manor house, still appears as a solid structure at the summit of the hill. The roughly circular enceinte, made up of irregular stretches of wall, is accessed by a ramp leading from the church. Several chicanes, bastions and posterns defended the access to the lower court yard which was reached through an arched gateway, now destroyed[4].