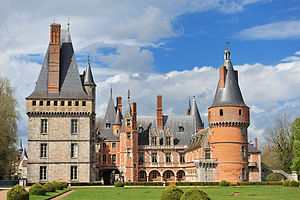 The château today seen from the south, with the cour d'honneur between the west and east wings

The Château de Maintenon is a château situated in the Eure-et-Loir region of France. It is best known as being the private residence of the second spouse of Louis XIV, Madame de Maintenon.

The castle has been classified as a Monument historique since 1944 by the French Ministry of Culture.[1]

The construction of the château began in the 12th and ended roughly in the 18th century. In the early 16th century it was purchased by Louis XII's treasurer Jean Cottereau, who transformed the château-fort into a country house. In the 17th century it was rebuilt for Madame de Maintenon, who purchased the estate in 1675.

The château's main features are the keep, constructed in the 13th century, and the principal corps de logis, flanked by two round towers, one at the avant-cour and the other at the bridge across the moat. The east and west wings frame a cour d'honneur, beyond which is the moat filled by the waters of the Eure, and, beyond, the parterre and park. The picturesque massing of the varied towers and roofs pleased François-René de Chateaubriand who found its special character was like that of an abbey or an old town, "with its spires and steeples, grouped at hap-hazard".[2]

At the far end of the gardens is the aqueduct called the Canal de l'Eure, also known as the canal de Louis XIV, ordered by Louis XIV. Its colossal scale impressed Chateaubriand, who said that it was "a work worthy of the Caesars".[2] It was constructed by the Marquis de Vauban between 1685 and 1690 in order to transport water from the Eure River to the gardens and fountains at the Château de Versailles.

In the 18th century there was an orangerie constructed as well as stables. 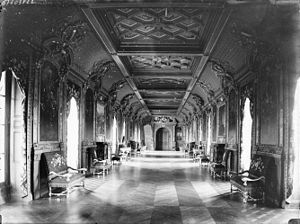 The interior has been restored and furniture and decoration can be seen;

The other tower is unable to be viewed.

The main parterre was designed by the famous André Le Nôtre who also worked at Versailles, Saint-Germain-en-Laye and Marly. The parterre has two interlacing "L"'s, in honour of Louis XIV. Two allées, given modern names in honour of Le Nôtre and Racine, border the Eure river.

At the far end, cutting through the gardens, is the aqueduct built from 1685 to supply the fountains of the park of the Palace of Versailles. The project meant that water was diverted from the Eure river some 80 km away. The arches of the structure reach a height of 60 feet. Vauban was in charge of the works.

The aqueduct had to have 47 arcades to the first row, 195 arcades to the second and 390 to the third one. The wars of Louis XIV prevented the work's completion.

It is also classified as a Monument historique since 1875 by the French Ministry of Culture.[3]

Succession of owners and inhabitants 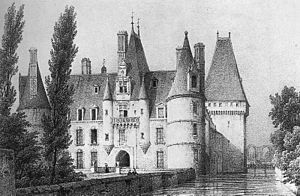 Lithograph of the 19th century by Bichebois 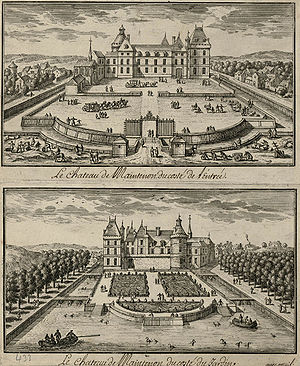 The château as it was when Madame de Montespan stayed here