Čaška (Macedonian: Чашка) is a municipality in central Republic of Macedonia. Čaška is also the name of the village where the municipal seat is found. This municipality is part of the Vardar Statistical Region. 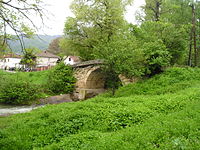 There has been an increase in tourism in the municipality recently. In 2008, there were 25% more tourists than the year before. Besides domestic tourists, there were also guests from Poland, Serbia, Slovenia, Croatia, the Czech Republic and Slovakia.[1]

According to the 2002 Macedonian census, Čaška Municipality has 7,673 inhabitants.[2] Ethnic groups in the municipality: