Chase Brass is a leading manufacturer of brass rods in the U.S. Located in Montpelier, Ohio, Chase employs nearly 200 hourly employees who are represented by the United Steelworkers Union (USW) Local 7248, and 85 salaried employees.[1]

Founded in 1876, in Waterbury, Connecticut, it was one of the brass manufacturers that contributed to Waterbury's nickname "The Brass City". One of the largest brassworks in Waterbury, Chase left the city in the late 1960s. 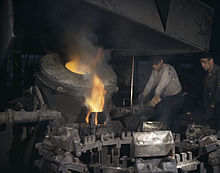 The company was incorporated in 1876, with Henry Sabin Chase as its founder and first President.

In 1929 the company built its first midwestern plant, in Euclid, Ohio. That same year Chase became a subsidiary of Kennecott Utah Copper, which was the largest producer of copper in the U.S., and Ten East 40th St, New York City, the Chase Tower, was finished and named after its first tenant, Chase Brass and Copper. It is now known as the Mercantile Building.

Standard Oil of Ohio (now BP America) acquired Kennecott in 1981 and thus acquired Chase. In 1988, the sheet division was sold to 500 employees of the company through an employee stock ownership plan; the new firm was named North Coast Brass & Copper Co. Only 40 Chase employees were left in the Cleveland area, at its Solon headquarters, though the firm still had two other divisions, in Montpelier, OH, and Shelby, NC.[2]

In 1988, BP was discouraged from selling Chase to TBG Inc., a New York-based manufacturing concern, with a threatened anti-trust action. The Justice Department warned TBG that it intended to file a civil suit to block its proposed $127 million acquisition of Chase Brass.[3] In 1990, BP finally sold the brass rod manufacturing operations in Montpelier, Ohio, the last remaining business unit of its Chase Brass and Copper Co. subsidiary. The rod mill, which then employed about 230 workers, made brass products for plumbing and other uses.[4]

In 1997, the board of directors and shareholders of Chase Brass Industries, Inc. legally changed its name to Chase Industries Inc. The Company's New York Stock Exchange symbol remained "CSI." [5] In 2000, Chase joined an consortium of specialty metal producers, the MetalSpectrum Partnership, to market metals on-line.[6]

The Chase Headquarters Building in Waterbury, Connecticut is on Grand Street across from the city hall. It is now occupied by the city of Waterbury’s offices. Chase Brass commissioned well-known architect Cass Gilbert to design it in 1916, across from his recently completed Waterbury city hall. Henry Chase, the company president, specifically requested that the headquarters be designed to contrast with the style of the city hall, resulting in a design which shunned colonial marble and brick. The company sold the building to preservationists in 1963 for one dollar, who in turn sold it to the city of Waterbury to be used as city offices, a function it still serves today. It is now known as the Chase Municipal Building and is part of Waterbury's Cass Gilbert Historical District.

Henry Sabin Chase gave property in Litchfield to his daughter, Miss Edith Morton Chase, where she created a summer estate. She bequeathed it to the state of Connecticut to be used to create Topsmead State Forest.[10]

A former plant site in Waterbury has been designated as a Superfund Clean-up site.[11][12]

During World War II, the Chase Brass and Copper Company made more than 50 million cartridge cases and mortar shells, more than a billion small caliber bullets and, eventually, some of the components used in the atomic bomb.[13]

Most of the brass buttons used on Federal uniforms, belt buckles and other fittings, were made in Waterbury, the "Brass City", notably by the Chase Brass and Copper Company.

Chase entered the consumer market with a line of chrome Art Deco household items in the 1930s, created by leading designers of the day such as Russel Wright, Rockwell Kent and Walter VonNessen. They were usually signed with the distinctive company logo of a centaur drawing a bow.[14][15] These items are sought after today as collectibles.

Chase discontinued this line in the early '40s, when it turned its attention to wartime production. Chase production of their 'Specialty' items lasted only 12 years, but during that time they issued over 500 items, and 500 more lamps and lighting fixtures.[16]

Retrieved from "http://en.wikipedia.org/wiki/Chase_Brass_and_Copper_Company"
Categories: Metals companies of the United States