The Charters Towers Region is a Local Government Area located in North Queensland, Australia southwest of and inland from the city of Townsville, based in Charters Towers. Established in 2008, it was preceded by two previous local government areas which dated back to the 1870s.

It has an estimated operating budget of A$27.5 m.

The City had its beginning in the Charters Towers Municipality which was proclaimed on 21 June 1877 under the Municipal Institutions Act 1864.[3] It achieved a measure of autonomy in 1878 with the enactment of the Local Government Act. With the passage of the Local Authorities Act 1902, it became a Town on 31 March 1903 and was proclaimed a City on 13 April 1909.[4]

In July 2007, the Local Government Reform Commission released its report and recommended that the two areas amalgamate. Amongst its reasons given for this recommendation were improved service delivery and capacity through a larger asset base and increased operating revenue, and the fact that a significant (and growing) proportion of the Shire's population lived in Charters Towers's outer suburbs and bringing all of Charters Towers under one local government was viewed as desirable. It did not consider amalgamation with the neighbouring Townsville/Thuringowa region due to disparate communities of interest. Both councils opposed the amalgamation, although the City Council concluded it was inevitable due to a shared community of interest.[5] On 15 March 2008, the City and Shire formally ceased to exist, and elections were held on the same day to elect councillors and a mayor to the Regional Council.

The council remains undivided and its elected body consists of six councillors and a mayor. 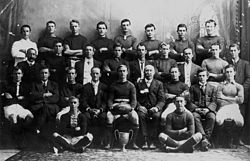 The populations given relate to the component entities prior to 2008. The next census, due in 2011, will be the first for the new Region.