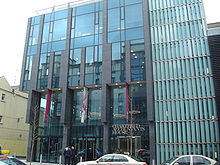 It is the sole organisation in both Ireland and Northern Ireland with the right to award the Chartered Accountant designation.

Founded in 1888, the Institute remained as a single body during and after the partition of Ireland in 1922. As of 2011[update], it has 20,000 members and is considered to be both an Irish and British professional body.

The Institute has mutual recognition agreements in place with its peer institutes in England & Wales, Scotland, Australia, Canada, South Africa, New Zealand, Hong Kong and the United States of America. Qualifying members of the Institute may also benefit from the European professional qualification directives

CAI is part of the Consultative Committee of Accountancy Bodies and members are authorised to conduct audit, insolvency and investment business work.

In 2007 the Chartered Accountants Regulatory Board was established to develop Standards of Professional Conduct and to supervise the compliance of members, member firms, affiliates and students.

[1][2]They initiated an investigation into the "circumstances around the issue of inappropriate directors' loans at Anglo Irish Bank"and into the performance of Ernst and Young.[3] In 2009, independent Senator Shane Ross said the Institute "ranks with the Central Bank of Ireland as the winner of the wooden spoon for watchdogs".[4] The first Chairman of the Regulatory Board, had companies he is a director of, fined a total of €3.35 million by the Central Bank of Ireland, for risk control and reporting failures.[5][6][7]

In 2009 Chartered Accountants House on Pearse St., was officially opened by President McAleese, with new resources for its members and conferencing facilities.[8]

An external inquiry team in February 2010 found that the Institute's complaints committee had a prima facie case to answer for the conduct of its proceedings and there were further apparent flaws in the accountancy body's disciplinary procedures.[9]

The Irish Times, the country's newspaper of record, in April 2010 raised questions about the role of Institute Members in relation to the crisis affecting the banking sector and an insurance company.[10] Within days, an opinion piece in the respected Sunday Business Post acidly said "what a glorious contribution that body of super-chargers made to the collapse of business and of the entire financial system here and how they have got away with it".[11]

The Irish Auditing and Accounting Supervisory Authority (IAASA), the independent body entrusted with overseeing corporate governance in the accountancy profession, in November 2010, fined the Institute of Chartered Accountants €10,000. It described the ICAI's complaints committee's behaviour as a "substantive failure and not merely a technical" one.[12]

The next week in November 2010, it was announced that the policing of audits of publicly quoted companies is being taken out of the hands of professional accounting bodies and transferred to the state’s auditing watchdog. The move of the role to an independent, state-run body is seen as a more stringent approach to enforcing audit standards. This follows on from an EU recommendation that member states needed to ‘‘up their game’’ in the monitoring of public interest bodies.[13]

The next month Irish accountancy firms and auditors who worked with the Irish banks during the previous three years were barred from doing key stress tests on behalf of the Central Bank of Ireland and the International Monetary Fund.[14]

The Director of Corporate Enforcement, Paul Appleby, in February 2011 said, there were grounds for questioning "the consistency and quality of audit work within the profession". Mr Appleby also said auditors "report surprisingly few types of company law offences to us", with the so-called "big four" auditing firms reporting the least often to his office, at just 5pc of all reports. He had taken issue on "numerous occasions" with the quality of audit work and audit reports issued by accountants. "Occasionally, this has resulted in admissions of lapses, and where appropriate, in revised audit reports being issued." At the same time, the Revenue Commissioners said "that current audits said little about the business model of firms or their liquidity position".[15]

The state’s auditing watchdog warned Irish listed companies that it wants to see better financial reporting in 2011, after stating that it has been "disappointed" by Irish plcs.[16]

An April 2011 report[17] into the Irish banking collapse criticised the role of external auditors in failing to identify and warn of the risky lending practices being adopted by Irish banks. It said auditors took a narrow interpretation of their job description and remained "silent" during the excesses of the boom. It found the external auditors of the main Irish banks consistently failed to report “excesses over prudential sector lending limits” to the Central Bank of Ireland.[18]

In July 2011, the Chartered Accountants Regulatory Board was fined a record €110,000 by IAASA, the third time the Institute was fined in the space of eight months. It called CARB's failure to comply its own procedures on five occasions as “ serious” and found that the Chartered Accountants' Institute recklessly “communicated inaccurate and misleading information” to the complainant.[19]

A week after the Irish Government pumped €1 billion into Credit Unions in October 2011, the Central Bank issued a strong warning to auditors they do not sign off on any accounts unless proper provisions are made for bad debts.[20]

Later in the same month the Central Bank again put the work of Auditors under the mircoscope following their failure to spot systematic and large-scale abuse of client funds at an Investment Firm.[21]

The Council is the highest governance organ of the Institute, determining its strategy and policy, and deciding on the allocation of resources to its various programmes. The Council consists of a total of 23 members with a possible addition of 3 co-optees. The bye-laws make provision for a geographical spread of Council members between the Republic of Ireland, Northern Ireland and Great Britain and for a balance between members in practice and members in business.