Charter 08 is a manifesto initially signed by over 350 Chinese intellectuals and human rights activists.[1] It was published on 10 December 2008, the 60th anniversary of the Universal Declaration of Human Rights, adopting name and style from the anti-Soviet Charter 77 issued by dissidents in Czechoslovakia.[2] Since its release, more than 10,000 people inside and outside of China have signed the charter.[3][4][5]

One of the authors of Charter '08, Liu Xiaobo, was awarded the Nobel Peace Prize in 2010. 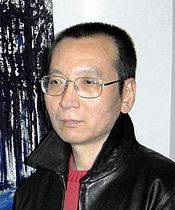 Liu Xiaobo was one of the writers of the document

Many of the original signatories were prominent citizens inside and outside the government, including lawyers; a Tibetan poet and essayist, Woeser; and Bao Tong, a former senior Communist Party official, who all faced a risk of arrest and jail.[6] The Charter calls for 19 changes including an independent legal system, freedom of association and the elimination of one-party rule. "All kinds of social conflicts have constantly accumulated and feelings of discontent have risen consistently," it reads. "The current system has become backward to the point that change cannot be avoided." China remains the only large world power to still retain an authoritarian system that so infringes on human rights, it states. "This situation must change! Political democratic reforms cannot be delayed any longer!"[6]

The opening paragraph of the charter states: 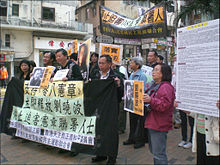 Protest in Hong Kong against the arrest of Liu Xiaobo

The Chinese government has said little publicly on the Charter.[9] On 8 December 2008, two days before the 60th anniversary of the United Nations General Assembly's adoption of the Universal Declaration of Human Rights, Liu Xiaobo was detained by police, hours before the online release of the Charter.[10] He was detained and later arrested on 23 June 2009, on charges of "suspicion of inciting the subversion of state power."[11][12] Several Nobel Laureates have written a letter to President Hu Jintao asking for his release.[9] In response, the Chinese government is trying to crush the dissidents:[13] at least 70 of its 303 original signatories have been summoned or interrogated by police while domestic media have been forbidden to interview anyone who has signed the document.[13] Police have also searched for or questioned a journalist, Li Datong, and two lawyers, though none have been arrested.[9] State media has been banned from reporting on the manifesto.[14] A blogging website popular with activists, bullog.cn, which may have had ties to the Charter, has been shut down.[15] On 25 December 2009 Liu Xiaobo was sentenced to 11 years in prison for "inciting subversion of state power" activities by the court. On 8 October 2010 he was awarded the Nobel Peace Prize "for his long and non-violent struggle for fundamental human rights in China".

A number of governments, including those of the United States[16] and Germany,[17] as well as the opposition in Taiwan,[18] have condemned the harassment of supporters of Charter 08 as well as hailing the Charter. International press has generally covered the Charter positively, and international NGOs have supported its message.[19][20][21] Other international figures, including the Dalai Lama, have also voiced their support and admiration of the Charter.[22] There were also protests in Hong Kong demanding the release of Liu Xiaobo and other signatories.