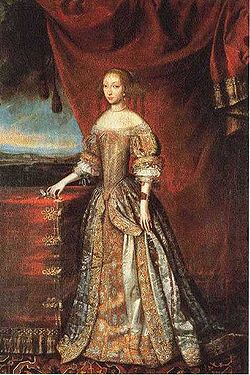 Charlotte Amalie of Hesse-Kassel (27 April 1650 – 27 March 1714) was queen-consort of Denmark and Norway, being the wife of King Christian V.

She was born in Kassel, Hesse, Germany. Her parents were Landgrave William clm VI of Hesse-Kassel and his consort Hedwig Sophia of Brandenburg. She was well educated in French, Italian, geography, and philosophy. Her mother was a strict reformer and politically oriented toward Brandenburg, which also affected her daughter's views. The marriage was arranged by her future mother-in-law, who wanted a daughter-in-law she could control, and in 1665, her future spouse was sent to Hesse to get to know her. The negotiations were drawn out, mainly because of religious matters.

Charlotte Amalie was married on 25 June 1667 to Prince Christian and became Queen of Denmark on his accession in 1670. As well as other children, they had a son, later King Frederik IV, and a daughter Sophia Hedwig. 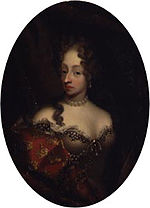 Charlotte Amalie was raised in the Reformed faith. In the marriage contract, she was not required to convert although this was disliked and met some resistance before it was accepted. She kept her faith after wedding Christian, who as ruler of Denmark was the head of the state church, the Lutheran Church. She succeeded in exempting herself and her court from the requirement that they adhere to the Lutheran Church. Charlotte obtained the right to practice her "Reformed" faith, and build a "Reformed" Church, which she financed herself. However, her action caused the Lutheran clergy to oppose her coronation as Queen. She did not get along with her mother-in-law, with whom she had conflicts regarding etiquette matters. She also supported the release of Leonora Christina Ulfeldt.

Her spouse prevented her from exerting any major political influence, because he did not want her to be as influential as his mother had been, and because he disliked her pro-Brandenburg sympathies. A spy, Justine Cathrine Rosenkrantz, was in fact placed among her ladies-in-waitings. However, she was not completely without influence, and she did manage to achieve some rights for the followers of her faith in Denmark (1685). She is described as charmful and with great tact, though not beautiful. She learned to speak Danish, which was appreciated. The relationship with her spouse was never a love match – he was constantly unfaithful during their marriage: his relationship with Sophie Amalie Moth started in 1672 – but it was a warm and mutually respectful friendship. She was not set aside or ignored at court, but enjoyed full status as queen. She was also very close to her children, and described as a good mother.

Charlotte Amalie gained great popularity from defending Copenhagen when King Charles XII of Sweden invaded Zealand in 1700. During this incident, she strengthened the resolve of the people of the capital by speaking to them, convinced the commandant of the city to give the public access to the canons, and organized the defence of the capital. For this act, she was hailed like a heroine.

She is known as the protector of the famous Marie Grubbe and her former lover after Grubbe's divorce and remarriage to her lover, which had made her an outcast: Charlotte Amelie gave refuge to the couple on her own domains.

Charlotte Amalie owned several estates around the country and she administered them skilfully. After the death of her husband in 1699, she moved to a mansion which she had bought: Charlottenborg Palace on Kongens Nytorv in Copenhagen, where she lived until she died. The mansion, which is named after her, has housed the Royal Danish Academy of Art since 1754.

She died in Copenhagen and was buried in Roskilde Cathedral.

The town of Charlotte Amalie on St. Thomas, U.S. Virgin Islands is named after her.