Humanitarian response to the 2010 Haiti earthquake

Humanitarian response to the 2010 Haiti earthquake 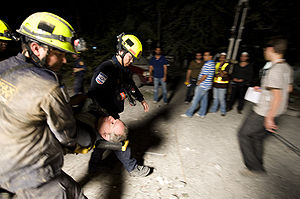 A survivor pulled from the debris of the Hôtel Montana

The humanitarian response to the 2010 Haiti earthquake included national governments, charitable and for-profit organizations from around the world which began coordinating humanitarian aid designed to help the Haitian people. Some countries arranged to send relief and rescue workers and humanitarian supplies directly to the earthquake damage zones, while others sought to organize national fund raising to provide monetary support for the nonprofit groups working directly in Haiti. OCHA and ReliefWeb are coordinating and tracking this on a daily basis.[1] As of March 21, 2010, Reliefweb have reported a total relief funding of $2.5 billion given and a further $1.3 billion pledged.[2]

A number of countries sent large contingents of disaster relief, medical staff, technicians for reconstruction and security personnel. Notably, the governments of the United States, Israel ,the Dominican Republic, Canada, Brazil, Italy and Cuba[3] sent over 1,000 military and disaster relief personnel each, with the United States being by far the largest single contributor to the relief efforts. The international community also committed numerous major assets such as field hospitals, naval vessels, a hospital ship, aircraft carriers, transport aircraft and emergency facilities soon after the extent of the disaster became apparent.

Progress in responding to the almost unprecedented scale of disaster was hampered by numerous factors, including major loss of life, multiple large aftershocks, devastated civil infrastructures, collapsed buildings blocking streets, the lack of electricity for gasoline station pumps, plus the loss of the capitol's seaport and air traffic control facilities. Additionally, the significant damage to the Haitian government ministries, all of which suffered varying degrees of destruction and personnel deaths, further impeded coordination of the disaster response.

In April 2010, the Haiti government asked that massive food distribution in the Petionville camp cease in order to allow the normal economy to resume.[4]

Appeals for international aid were issued, including by Raymond Joseph, Haiti's ambassador to the United States and his nephew, singer Wyclef Jean,[5] also a "roving ambassador" for Haiti.[6] The American Red Cross quickly announced that it had run out of supplies in Haiti and appealed for public donations.[7] British charities soon launched a massive fundraising effort.[8] Ireland, which as a country has a history of helping Haitians build houses and has notable connections to Haiti through charities Concern and GOAL, telecommunications operator Denis O'Brien and broadcaster George Hook,[9][10][11] immediately switched all its charitable efforts to helping those affected by the quake.[12]

Rescue supplies delivered to Haiti from US Navy ships
Main article: Humanitarian response by national governments to the 2010 Haiti earthquake

Queen Elizabeth II, monarch of each of the Commonwealth realms, made a donation to the relief effort and issued a personal message of condolence to the President of Haiti.[13][14]

The European Council and its member nations later announced more than €429 million (US$600,000,000) in emergency humanitarian aid, rehabilitation aid and medium-to long-term reconstruction aid.[16] The aid was to be provided as detailed:

The European Commission pledged to provide €100 million for short term recovery and rehabilitation.

The European Commission pledged to provide €200 million from the 10th and 9th EDF funds for Haiti. They would be in addition to bilateral contributions from EU Member States' budgets. [17]

The European Union thus pledged at least €429 million to Haiti in both emergency and humanitarian aid to help the medium and long term work of rebuilding the country devastated by the earthquake. In addition, the 27 countries decided to send some 150 troops from the European Gendarmerie to ensure that humanitarian aid would reach the people affected by the earthquake.

The financial contribution of the EU as a whole totaled €429 million, broken down as:

The Union of South American Nations pledged US$300 000 000 to help rebuild Haiti on long terms. A meeting was held in Quito in order to discuss how it would be utilized.[20]

As the extent of the catastrophe unfolded, United Nations Secretary-General Ban Ki-moon commented: "There is no doubt that we are facing a major humanitarian emergency and that a major relief effort will be required". The U.N. mobilized an emergency response team to help coordinate humanitarian relief efforts.[21]

Many non-governmental organizations, including international, religious and regionally-based NGOs, immediately pledged support in the aftermath of the 2010 Haiti earthquake. NGOs contributed significantly to both on-the-ground rescue efforts and external solicitation of aid for those rescue efforts.

Contacting friends and relatives in Haiti