Charles Octavius Swinnerton Morgan DL, JP, FRS, FSA (15 September 1803-5 August 1888), known as Octavius Morgan, was a British politician, historian and antiquary. He was a significant benefactor to the British Museum.[1]

Morgan was born on 15 September 1803. He was the fourth son of Sir Charles Morgan, 2nd Baronet, of Tredegar Park, Monmouthshire, by his wife Mary (née Stoney). Charles Rodney Morgan and Charles Morgan, 1st Baron Tredegar, were his elder brothers. He was educated at Westminster School in London and at Christ Church, Oxford, gaining an M.A. in 1832.

Morgan had inherited an ample fortune and in 1839 he had "The Friars" rebuilt for his use in the Elizabethan style. The Friars had at one time been home to Carmelite monks. He was said to have filled the house with "Tudor furniture, more curious than useful".[2] Morgan had an octagonal preaching platform installed half way up the main wooden staircase where he would conduct services every day. His congregation would consist of his maids, the housekeeper, bailiff and the boot boy. The lock he had installed on the door reflected his interest in mechanisms and automata. The substantial brass lock is still on the door of his house and it has seven subsidiary controls.[2]

He had been elected to Society of Antiquaries but was not active until 1848 after which he was Vice-President more than once.[3] Morgan published papers on astrolabes and episcopal rings and early communion plate. In 1872 he published a valuable guide to the monuments in the Priory Church of St Mary in Abergavenny.[3] 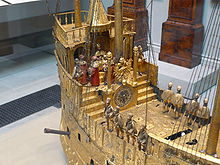 The Mechanical Galleon that Morgan gave to the British Museum.[4]

During his lifetime Morgan made a number of generous donations to the British Museum including the automaton known as the Nef or Mechanical Galleon in 1866.[4]

Morgan never married and died on 5 August 1888 aged 84.[5] He was buried in his family's vault at St Basil's Church at Bassaleg in Monmouthshire. He left his clock collection, astronomical instruments and episcopal rings.[6] His astrolabes included the 14th century astrolabe used to call the failthful to prayer in Damascus.[7] Morgan's collections of papers including his translations of Welsh poetry are in the National Library of Wales.

Today his house's extensive dairy and orangery are gone as his home is now (2010) an educational facility for the Welsh National Health Service but it is said that the house is still adorned with Latin inscriptions hidden within wooden carvings and a grand imported German fireplace bearing his initials.[2]