The Paper Chase (novel)
This article is about the 1970 Osborn novel. For other novels with the same title, see Paper Chase (disambiguation). 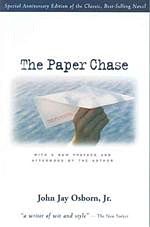 The Paper Chase is a 1970 novel written by John Jay Osborn, Jr., a 1970 graduate of Harvard Law School. The book tells the story of Hart, a first-year law student at Harvard, and his experiences with Professor Charles Kingsfield, the brilliant, demanding contracts instructor whom he both idolizes and finds incredibly intimidating.

The story centers on Hart, a brilliant young law student from Minnesota who attends Harvard Law School and becomes obsessed with one of his teachers, Professor Charles W. Kingsfield, Jr. Hart becomes an expert on Kingsfield's subject, contracts; he reads everything about the subject, including all of Kingsfield's papers, most of which are not on the reading list. He goes so far as to break into the law library to read Kingsfield's original law school notes. Hart becomes such an expert that Kingsfield asks him to contribute to a paper.

At the same time, he begins a relationship with Susan Field, who turns out to be Kingsfield's daughter. Susan stands aloof from the law-school rat-race and dismisses all the things Hart cares about most.

At the end of the term, Professor Kingsfield really means something to his students, but he still does not know their names. For him, the class is only a group of people, the students simply names on a paper. He does not even recognize Hart after several encounters and classroom debates. After one incident, wherein Kingsfield asks Hart to leave the class, Hart says in front of the lecture hall, "You are a son of a bitch, Kingsfield."

After much effort preparing for the final exam, Hart's grade is delivered to him, but he simply makes a paper airplane out of his final report card, and sends it sailing into the Atlantic Ocean without looking at it.

Professor Charles W. Kingsfield Jr. is one of the key characters in the novel, film and television series. Portrayed by John Houseman in the film and the television series, Kingsfield is an imperious, highly respected (and feared) professor of contracts at Harvard Law School, known for his unrelenting use of the Socratic method on his students. The harshness of his methods is encapsulated in a scene where he calls the protagonist to the front of the class and gives him a dime, telling him to call his mother and tell her there is little chance of him becoming a lawyer. However, he is also noted for his own scrupulous work ethic, laboring from early in the morning into the late hours of the night to perfect his knowledge of contract law, that he might better teach his students. His most famous line from the film illuminates his view of his role:

You teach yourselves the law. I train your minds. You come in here with a skull full of mush, and if you survive, you'll leave thinking like a lawyer.

The phrase "think like a lawyer" has since become a cliché among law professors and students.[citation needed]

Kingsfield himself was a law student at Harvard, as shown by the presence of his own class notes - doodles and all - in the institution's archives. Kingsfield has a daughter with a fiercely independent personality, although she is shown to love her father very much. Kingsfield's daughter also discloses that her father has insisted on personally handling legal matters pertaining to her ongoing divorce proceedings. Although Kingsfield is a cold and distant figure in the film, in the television series, he is slowly developed into someone with more personable characteristics.

In modern parlance, law students are quick to compare their most challenging professors to Kingsfield.

There are several possible inspirations for the character. Retired Harvard Law professor Clark Byse is said to have been the inspiration for the character's position at Harvard Law School, though not the character's personality. [2] According to John Houseman,[1] the inspiration for Kingsfield was crusty professor Edward "Bull" Warren, also reflected in the Boston Globe in 2004.[2] Houseman noted that Kingsfield's behavior is actually a toned-down version of Warren's famous classroom rudeness, as enshrined in classroom lore, and recounted several examples of the professor's putdowns.

In 2003 a 30th-anniversary edition of The Paper Chase was released by Whitston Publishing which contains both a new preface and an afterword by the author, with the latter containing material deleted from the original novel.

The 1973 movie, based "almost word for word" on the novel according to Osborn, starred John Houseman as Kingsfield and Timothy Bottoms as Hart.

CBS aired a one-hour drama series in the 1978–1979 season based on the movie. John Houseman reprised his movie role, and James Stephens played Hart. In 1983, pay-cable network Showtime brought back the show with both Houseman and Stephens. At the end of three seasons on Showtime, Hart finally graduated.

The series made its DVD debut with the release of a 6-DVD box set of Season 1 via Shout! Factory.