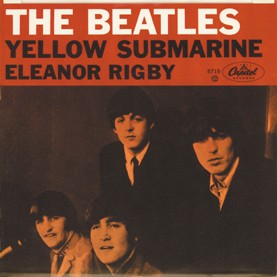 "Yellow Submarine" is a 1966 song by (credited to ) which was recorded by , , , and . Although it had previously been released on the Revolver album, it became the title song for the 1968 animated film, also called Yellow Submarine. It is also the title for the soundtrack album to the film, released as part of The Beatles' music catalogue.

The song was better received in Britain than in the . The single went to #1 on every major British chart, remained at #1 for four weeks and charted for 13 weeks. It won an for the highest certified sales of any single issued in the UK in 1966. However, it failed to reach #1 on the American charts. A contributing factor may have been the "Bigger than Jesus"">"bigger than Jesus" controversy.

McCartney was living in 's parents' house when he found the inspiration for the song:

Produced by and engineered by , "Yellow Submarine" was finished after five takes on 26 May 1966, in studio two at , with special effects being added on 1 June 1966.

Lennon blew through a straw into a pan of water to create a bubbling effect, McCartney and Lennon talked through tin cans to create the sound of the captain's orders, and Abbey Road assistant engineers John Skinner and Terry Condon twirled chains in a tin bath to create water sounds. After the line, "and the band begins to play", Emerick found a recording of a brass band and changed it slightly so it could not be identified, although it is thought to be a recording of Georges Krier and Charles Helmer's 1906 composition, "Le Reve Passe". To stay with the children's story theme, the original recording had a spoken intro by Starr, but the idea was abandoned on June 3 1966. "Yellow Submarine" was mixed on the 2nd and 3rd of June, and finished on 22 June 1966.

Various people unofficially contributed to the recording: , , , , and (providing sound effects and "party" noises; laughter, clinking glasses, and background chatter) as well as chauffeur Alf Bicknell, and studio engineers Skinner and Condon. When the overdubs were finished, Evans strapped on a marching and led everybody in a line around the studio doing the conga dance whilst banging on a bass drum.

The "Yellow Submarine" single was the Beatles' thirteenth UK single. It was released in the UK on 5 August as a 'double A side' with "", and in the on 8 August. The "" album was released the next day.

The single went to #1 on every major British chart, remained at #1 for four weeks and charted for 13 weeks. It won an for the highest certified sales of any single issued in the UK in 1966. No promotional film clip was made, so some TV programs (including the BBC's "") created their own clips from stock footage.

The single was released during the controversies about the "Butcher Cover" (the album cover) and ,

The Beatles themselves were not enthusiastic in participating in a motion picture at the time, as their enthusiasm waned after the TV special "Magical Mystery Tour." They saw an animated film as a way to honour their commitment to United Artists for a third film. Actors were hired to imitate their voices in the film. The Beatles were impressed after seeing a rough cut of the film, and agreed to make a live-action cameo appearance in the final scene.

In 2005, a 51-foot long yellow submarine metal sculpture was placed outside Liverpool's John Lennon Airport, which was was built by apprentices from the shipyard, and had been used as part of Liverpool's in 1984.