The Museum of Science (MoS) is a Boston, Massachusetts landmark, located in Science Park, a plot of land spanning the Charles River. Along with over 500 interactive exhibits, the Museum features a number of live presentations throughout the building every day, along with shows at the Charles Hayden Planetarium and the Mugar Omni IMAX theater, the only domed IMAX screen in New England. The Museum is also an accredited member of the Association of Zoos and Aquariums (AZA) and is home to over 100 animals, many of which have been rescued and rehabilitated from various dangerous situations. The Museum is also one of the city's three bases of operations for Boston's privately operated Duck Tours. 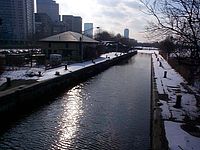 Photo of the original lock for the Charles River in Boston, Massachusetts as bordered by Nashua Street Park on the south and Museum of Science, Boston to the north and positioned just west of the Charles River Dam Bridge. 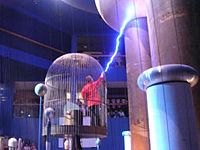 The giant van-de-Graaff generator in the Boston science museum.

The Museum began as the Boston Society of Natural History in 1830, founded by a collection of men who wished to share scientific interests. In essence, the museum began as a place where these men could store and display skins and other trophies of their travels to Africa and Asia. Today, a number of taxidermed specimens remain on display, much as they do at the American Museum of Natural History in New York, as well as many other museums, teaching children about the animals of New England and of the world. In 1864, after the Society had gone through several temporary facilities, a building was purchased in the Back Bay area of the city and dubbed the "New England Museum of Natural History." There it remained through World War II, presumably growing and changing over the decades into more of a science museum and less of a gentleman's club for safari trophies.[1]

After the war, this building was sold, and the museum was reestablished under the name "Boston Museum of Science". Under the leadership of Bradford Washburn, the Society negotiated with the Metropolitan District Commission for a 99-year lease of the land now known as Science Park. The Museum pays $1 a year to the state for use of the land. Construction and development began in 1948, and the Museum opened in 1951, arguably the first all-encompassing science museum in the country. In these first few years, the Museum developed a traveling planetarium, a version of which is still brought to many elementary schools in the Greater Boston area every year. They also obtained during these early years "Spooky," a great horned owl who became a symbol or mascot of the Museum; he lived to age 38, the longest any great horned owl is known to have lived.

The Science Park/West End MBTA station was opened in 1956, and the Charles Hayden Planetarium in 1958.

Many more expansions continued into the 1970s and 1980s. In 1999, The Computer Museum in Boston closed and became part of the Museum of Science, integrating some of its displays, although the collection moved to the Computer History Museum in Mountain View, California.[2]

A major renovation and expansion took place during 2005 and 2006.

Museum of Science on the Charles, January 2008 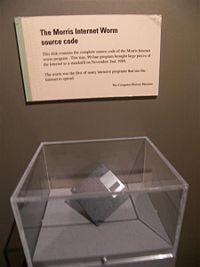 A disk containing the source code for the Morris Worm is located in the museum's Computing Revolution exhibit.

Although the history artifacts of "The Computer Museum" were moved to Silicon Valley and forms the current Computer History Museum, TCM educational exhibits and objects were transferred to the Boston Museum of Science where two new computing and technology exhibits were created. One, The Computing Revolution, relates the history of computing through a variety of hands-on interactive exhibits, while the other, Cahners Computer Place, houses displays ranging from educational video games to an interactive AIBO ERS-7.