Charles Hamilton was the first Anglican Bishop of Ottawa, Ontario. He was a Canadian Anglican bishop in the last decades of the 19th century and the first two of the 20th.[1]

Hamilton was born in 1834 and educated at University College, Oxford. He was a curate of Quebec cathedral and then incumbent of St Peter's Church in the same city. In 1884 he became the Bishop of Niagara.[2] He was translated to become the Bishop of Ottawa in 1896 and was additionally elected as the Metropolitan of Canada in 1909 and then of Ontario in 1912. He died in 1919.[3] 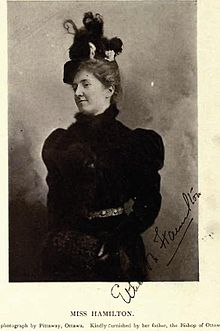 Charles Hamilton and his wife, Frances Louisa Hume Thomson had three daughters. Miss Ethel Mary Hamilton, who was born and educated in Quebec, accompanied her parents on her father's election to the bishopric of the Ottawa, Ontario diocese in 1896. The family lived in Bishopscourt in Ottawa. On May Day, 1898, at Government House, Miss Ethel Mary Hamilton was elected and crowned "May Queen." She presided over the May Court Club, which had been established by their Excellencies the Earl and Countess of Aberdeen from 1896 until 1900. [4]